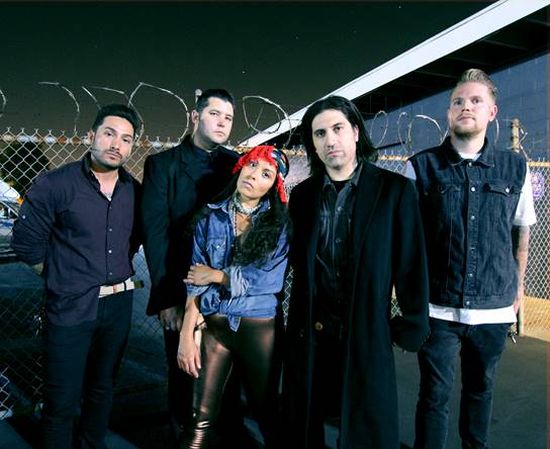 Hi everyone!  I’m really diggin’ what I’ve heard of your music and can’t wait ‘til your debut album, Southland Hum, comes out May 3rd on Maplewood Records.  Before we get into it, can you please list who’s in the band and what instrument you play?

Your vividly emotive and dynamic tunes are a rich stew of all your lineages, influences, and interests.  I’ve read that you have a “cowpunk past”, which is a blend of punk rock and country music.  Does this style flavor all the songs on Southland Hum?

Louie Perez III:  The personality of the band definitely resonates in every track .Even though the songs will go from a Woody Guthrie-style folk protest, to  a swamp blues ode to SoCal at a punk tempo, I think somehow there is a distinguishable commonality throughout the entire record.

Ruby Rosas:  We don't have much of a past as we've only been together less than 2 years. Cow punk has been thrown around at us but it doesn't sum up the whole.

Mike Berault:  I think we would love to be accepted as a cow punk band.  Outlaw country and the lineage of genuine American rebel music.  It definitely, in my opinion, is one of the overlaying themes to all the songs.  If our songs could fit into the soundtrack to Every Which Way But Loose... then we're doing something right.

Speaking of a storied lineage, Ruby, you’re the daughter of Los Lobos singer Cesar Rosas, and Louie, you’re the son of Los Lobos guitarist Louie Perez II.  How much have your parents’ musical style and history influenced you in relation to LP3 & The Tragedy?

Louie:  Influence is hard to consciously determine for me. We definitely set out to make a record we would have wanted to hear this time around, but my influences were not as contrived as it was more about writing a group of songs instead of sleeping. I guess influence becomes as inherent as your upbringing, and the influences are out there for comparison. We grew up in and around the style of music that we play, so I guess there would be no argument there.

Ruby:  Can't help our upbringing, so it's probably the unconscious structure. Our attitude, outlook, and swag drive the music.

Carlos, Mike, and/or Eric – What artists, lineage, and/or types of music have influenced your backgrounds in regards to LP3 & The Tragedy?

Mike:  I grew up steeped in the local punk rock and ska of the early 90's here in SoCal and "alternative" music of the day.  I was a crazy fan of R.E.M., and heavily influenced by Firehose, Descendants, Bad Religion, Fishbone, early No Doubt.  It's an odd pairing, but in those days I was just a skate/surf kid who had friends that were better guitarists than me, so I knew how to play the accordion and I used that as the one thing that I could do to stand out.  It’s worked for me for years.

Can you give a glimpse into the creative process behind Southland Hum?  Did you go into the studio with fully-formed songs or did you hash it out all together during recording?

Louie:  I will usually come up with the song and lyrics on a voice memo in the late, late night and send it to the rest of the band. They hear it during the day while the vampire sleeps.  The song truly becomes its own personality once it gets the Voltron treatment though. I get to be the Black Lion which is my favorite one... Most of the record was captured live on analog tape at Golden Beat in Glassell Park both before and after our SXSW Tour.

Mike:  The LP usually has a skeleton of what the song will be and we all will add our piece.  I consider my parts as the frosting on the song.  I go in last and just make something that is good already a little sweeter.

Eric Fuller:  Each song began with an audio file being sent to all of the band members at 0 dark 30 in the morning, with Louie singing and playing guitar on it. From there, we would take it into our rehearsal studio and come together with an idea of structure and style. Hours turned into weeks and weeks into months. When we had enough material for a full length album, we approached our friend Andrew Schubert to record the album straight to tape. It was a choice to do so to capture the raw “live sound” just like the bands we all grew up listening to. Going into the studio, all the songs were pretty much set in stone in terms of how they were going to be played, but of course we each would throw a curveball or two just to add some flavor. Recording live was a pain-staking process, but the end result was even more than we could have hoped for.

You reference your Southern California roots on the title song and delve into heartbreak on your new single “Heart Locked In A Cell”.  What are some other topics that you cover on the album?

Louie:  Although the topics of the record are diverse, they are all common to anyone living in Southern California. Love, Heartbreak, Cultural Diversity, Injustice, Violence, Addiction, and Apathy are all addressed in front of the beautifully fractured backdrop of our tarnished desert paradise we call home.

I’m a sucker for male and female vocal harmonies in song and, Ruby and Louie, your vocals are very captivating.  Did you know from the inception of the band that you wanted to share vocal duties?

Louie:  Hey, thanks!!!  This whole band was a fortuitous experiment that continues to progress. Ruby and I have always talked about doing something together. We really dug how it sounded from jump street so I told her "Sing as much as you can, on as many songs as you want, and don't stop!" Haha!

I’m sure your live performances are a huge draw.  Do you feel the most at home on the stage?  Are you planning on touring nationally to promote Southland Hum?

Louie:  We are extremely grateful to have attendance increasing at every show. Live is the most comfortable place for us to be right now. I think we are into touring sporadically, as long as it does not require returning from tour homeless and unemployed.

Ruby:  Our live show is definitely a strong point. A national tour would be nice, but no plans yet.

Eric:  Man, I don't know even where to begin with live performances. We live for it, we work effortlessly to perfect it, but at the same time, it comes naturally with this band. Being onstage is one of the greatest feelings on earth, especially when you get to share it with your closest friends and family. It’s the definition of home if you ask me. There is definitely a lot of talk of touring and making our rounds to support the release of the record, but no dates are confirmed yet.

Actually, you have an enviable string of gigs supporting X, Los Lobos, and The Blasters from May 6th through 8th, after the release of your album!  How pumped are you to playing with those greats?

Louie:  We are honored to have been invited by X to do these shows. It's a perfect musical match for us to play in this type of musical genre, but with bands of this caliber is totally mind-blowing. We only hope to live up to the opportunity and give back what has been given to us so generously.

Ruby:  Pretty awesome to be invited by X to play. We're very humbled. We are so grateful and exited.

You probably get asked this a ton, but I’m curious about the meaning behind your band’s name!  The “tragedy” part sounds bleak, but your music is so vibrant and alive, so I’m confused… LOL

Louie:  The songs are sonically uplifting, but the lyrics can be really fucking sad at times. 'LPIII' are my initials and 'The Tragedy' is the band.  Technically it should just be 'The Tragedy' since I'm a member of the band. I’m guessing it sounds a little more original as long-winded as it is. I’m just as confused as you are.

Ruby:  In some strange way we all have a dark past. But to be in the light you must have a shadow. Kinda works out.