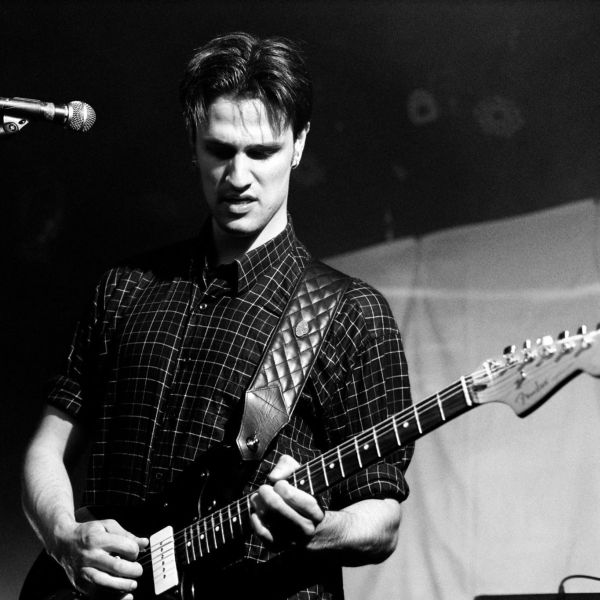 Seattle, Washington-based post-punk/shoegaze/alt-rock band Nostalgist, founded and led by singer-songwriter and guitarist Asa Eisenhardt, is making waves with its heavy and ethereal music that combines the best of several genres.  The act’s upcoming album Disaffection will arrive March 16th on vinyl and March 30th digitally, and stunning new number “Present:Tense” is out now.  Eisenhardt has kindly taken some time out of his schedule to chat with Rebel Noise about Nostalgist’s magnetic sound (including Eisenhardt’s deep and brooding vocals) and outlook.

Hello there, Asa!  It’s so good to connect with you about your band Nostalgist.  You merge all my favorite styles in your music, from post-punk to dream-rock - and Goth - and shoegaze...(at least to my ears)!  Nostalgist is basically my new favorite band, but from what I understand, you’ve been around for a while.  What sparked you to form Nostalgist and when did this occur?

Thank you so much for all the kind words and coverage you've sent our way, Jen. I moved home from college in 2010 and had long dreamed of doing something in the vein of my favorite Creation Records artists, only heavier. So after seven years of playing bass, I switched to guitar and, alas, spent more time thinking about gear than actual songcraft. The demo version of "Illusory" is very much the proof in the pudding.

In addition to the obvious shoegaze stuff, the band was initially supposed to be much more electronically-focused and involve my longtime friend Zach Goist, whose skill set is simply vast. But our schedules simply weren't compatible, and rock instrumentation was really where the music seemed to be heading. As an aside, Zach and I are at long last collaborating on a dubby, ambient electronic project with him in the lead, and I'm stoked for whenever that's ready to be unveiled.

Between my amateurish beginnings and now, there have been two lineups: one with Martin Berg and Jeff Spencer, and the next with Mark Knowles and Connor Keogh. The former played locally and recorded Of Loves and Days Ago, while the latter played locally and toured the West Coast.

Do descriptive tags for Nostalgist’s style bother you, or are you cool with music critics and listeners being flummoxed in how to describe your amalgamated sound?  I’m picking up so many delectable sonic morsels on each of your songs that it’s difficult for me to categorize your music!

I'll say what many do: genres are a double-edged sword, a necessary evil. Obviously having some sort of stylistic barometer is good, but tags can be confining or completely ill-informed from the start. Grunge is a prime example. I'm convinced it was 100% a major-label marketing term when they swept upon this city like vultures with overflowing pockets. Besides the incredibly general loud/soft dynamic, which of the big-name late '80s/early '90s Seattle acts sounded at all alike? Not only can a genre tag like this be a pigeonhole, but a historical revisionism mechanism.

All this said, I have no delusions of being an innovator, just someone who mixes influences and filters them through their own experiences. If those influences are obvious, then good! So long as the music is enjoyable without sounding wholly derivative, I am more than satisfied.

Do you consider Nostalgist a solo music project or a band, or does it depend on the setting (in the studio versus on the road)?

I think if anything, I was too inconsistent about this for years, and definitely to the aggravation of previous bandmates. I wanted leadership and far more control over creative direction, but didn't make that clear and/or didn't put in the work to iterate. So when the second lineup of the band fell apart, I took it upon myself to determine exactly what I wanted to do with the band, and decided that if I wanted to be the leader, I'd better have the musicianship to back it up. Disaffection is the result - a mission statement/definitive template of what I want Nostalgist to be all about, and where I'd like to take it.

So, ultimately: It's a band. One led by me, but with room for the respective voices and contributions of the other members. Alex Entrekin (drums) and I have become fast friends and even faster musical partners since his joining in the fall - He absolutely slays these songs and has strong, focused ideas, both when adding to Aesop Dekker's recorded parts and when writing new material.

You’ll be releasing new album Disaffection in March.  What can listeners expect on the LP, style-wise and lyrically?

A further refinement of our sound, hopefully to a catchier, less-meandering end. I was way too fixated on aesthetics during our previous release, Of Loves and Days Ago, and I think that structurally shows. Lyrically, there's more immediacy, but still plenty of tasteful (I hope) verbosity.

Recent mesmerizing single “Present:Tense” is a lushly dense spiral downward – and outward – filled with your rich and resonant vocals and Wall-Of-Sound guitars that recalls the thick textures of stellar ‘90s shoegaze outfit Catherine Wheel.  What draws you to this type of sound?

Again, thank you for such high praise. Siamese Dream is the starting point for huge guitar sounds for me, actually. I distinctly remember being in high school, already obsessed with the first three Pumpkins records, and reading a Revolver magazine feature with Chino Moreno on the then-forthcoming Team Sleep album. In citing influences for the project, he described Siamese Dream's guitar sound as "heavy, but warm and huge - like it's hugging you." That parlayed into my hearing Loveless early on in college. Simultaneous to all this, I really came up in metal during my formative years, and Opeth's sounds have always been a conscious influence, too.

…and I’m pretty sure Catherine Wheel is an inspiration to you, since you also include a cover of that band’s song “Texture” on your forthcoming album. What other groups, besides those that you’ve already mentioned, do you consider as lampposts lighting the way on your musical path?

As somewhat alluded to above, Catherine Wheel is less of an influence than some may think, not that my including "Texture" on the album did that any favors. In early 2016 we were asked to contribute to a Catherine Wheel covers compilation, and serendipitously I was already doing pre-production for Disaffection. For this band, I didn't want to do digital-only releases, and because this is a mini-album as opposed to an LP proper, I thought adding "Texture" to the end of the tracklist would be an easy way to bring it into material form.

I do love that Catherine Wheel focused on riffs, though.

Lampposts are a continuous thing, of course. I don't want to bore anyone reading with a huge list of bands already contained in the About section of our Facebook page, so here's some recent ones: Bark Psychosis, Big Country, Harmonia.

I want to add doom-rock as a side of your sound, because there’s a heaviness to all of your tracks – not only instrumentally, but lyrically as well.  Where does your despair come from?  What are you tackling, and untangling, on your songs?

I don't know what you mean by doom-rock, honestly. Do you mean doom metal? I definitely hold Katatonia's Brave Murder Day and Warning's Watching from a Distance albums near and dear, but I wouldn't associate much else in the way of the subgenre with our sound or influences, really.

Lyrically, I am largely concerned with trying to evoke a moment, scene or story, and usually within the context of love or lack thereof. I don't know that I'd associate the word "despair" so much as just heartache. There's inevitably some artistic license with my lyrics, but there are depths of depression I simply don't want to reach or touch in them.

I'm trying to filter my influences, experiences and emotions through a sort of cinematic, dreamy aesthetic. It's also important to me to avoid specifying gender so as to maximize the possible relatability of the subject matter.

Can you take us through the lyrical ebb and flow of “Present:Tense”?  From what I’ve read, it’s about your specific experience with (dis)connection in a relationship.

"Present:Tense" was one of two songs I wrote in the immediate aftermath of that situation, and though there was editing aplenty, the verses are way more stream-of-consciousness and simple than that of previous releases. They're quite vague, really, just some very open dream imagery (I seem to be drawn to water/oceanic themes) and rather blunt emotional statements. The chorus is far more forthright about enduring and persevering, knowing that love can happen again, somewhere/with someone else. Not an entirely happy or sad song, but a wounded-yet-determined one.

Disaffection will be self-released on your own Nostalgium Directive label.  How do you balance your creative side with the business aspect of operating a record label?  Are you planning on signing other acts to it?

The truth about Nostalgium Directive is this - I am absolutely stoked on what's been released, it's just that I am horrible at advertising. I don't feel good about seeing the physical end result of all the artists’ hard work just sitting in my living room, taking up space. The label's future is ultimately uncertain. I don't want to waste anyone's time. I'm not looking for new acts at present.

How will you be supporting Disaffection once it comes out in March?  Will you be touring or releasing any videos?

We're playing a release show with Geist & the Sacred Ensemble and Grey Waves on March 17th. What happens beyond that largely hinges on finding a full-time bass player. Monte McCleery, who's been filling in with us and will play the show, is just too slammed for time between his job and his doom band Un. The three of us get along super, super-well musically and personally, and as such Alex and I are bent on finding someone equivalently compatible.