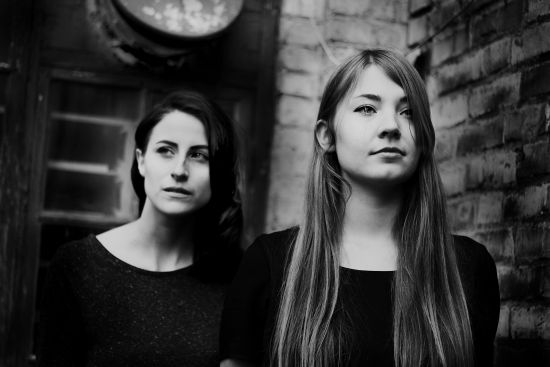 Hey there Tuva and Nelly!  It’s so cool to touch base with you about the recent release of your self-titled debut album and to find out more about your indie rock sound and yourselves.  What were preparations like for the Pale Honey album?  I think you’ve been playing a lot of gigs in your native Sweden lately.

Hi there! Thank you!  Actually, we haven’t played that many gigs here in Sweden this past year, but we have done two European tours! We recently came home from the latest one, where we visited Denmark, Germany, Hungary, Austria, and Slovakia. It's been great to play live so extensively and intensely these past few weeks!

You released a 3-song EP titled Fiction last year and this March you followed it up with the Youth single.  The music-related blogosphere is all aquiver about the song “Youth” and agog for your debut album.  Have you kept up with the chatter online about the burgeoning impact of your band or do you shy away from reading about yourselves online?

We try to read most of what is written about us, and almost every time we feel really flattered because of all the lovely words and ovations, but, while it is encouraging, we don't let it get into our heads too much.

I’ve had a listen to your new album and I’m enjoying the sonic variety you’ve packed into it. The 10 songs are not all retreads of “Youth”. While you do rock out a lot, you also reflectively rein it in and utilize a range of guitar and electronic/synth sounds and drum rhythms.  Tuva, even your vocals are changeable, where you take on a richer tone on “Bandolier” than on other songs.  Tuva, you play guitar, and Nelly, you play drums.  Who is playing bass guitar and synths on the album?

Thanks! That’s actually something that just came naturally for us, the variety of all the sounds, and we’re very happy with that. It’s Anders (our producer) who plays the bass guitar and synths.

Who is the songwriter in the band or do you both contribute to the lyrics?

Mostly it’s the both of us who come up with song ideas together in our rehearsal room; Tuva playing guitar and humming on song melodies, and Nelly playing the drums. From there, we continue working on the songs together with Anders. We write the lyrics together and work around a song-theme based on a sentence or two.

How long have you known each other and what sparked you to start Pale Honey?  I’m assuming you were friends first and then you decided to form a band, but maybe I’m mistaken?

That’s pretty much right, yes. Almost immediately when we became friends (in 8th grade in school), we got the idea of starting a band. So we did!

Your indie rock sound has been compared to various artists that include PJ Harvey (a favorite of mine), Sleater-Kinney, Screaming Females, and even The White Stripes.  Do you find a kinship with any of the above-mentioned bands or maybe others like Blood Red Shoes (another fave of mine)?  Your tune “Hung Me Up to Dry” off the Fiction EP is reminiscent of that duo’s sound at times, at least to my ears.

Both of us love PJ Harvey and of course it’s an honor to be compared with her.  While we do not try to copy her or in any way sound like her, we’ve been listening to her since we started playing music together and she does have a raw simplicity to many songs that we both love. Maybe we’ve been subconsciously impacted by her work, as well as the White Stripes, where the latter we can see some similarities with the minimalistic sound that suddenly explodes into a fuzz of electric guitars. But to be honest we probably have the minimalistic sound due to our set-up and the fact that we’ve learned how to play our instruments from scratch ourselves over the years.

Why did you decide to include “Fish” and “Fiction”, which are on 2014’s Fiction EP, on the album?  Did you re-record them for the album?

We didn’t re-record them but we did make a new production and a new mix for both of the songs since we simply thought that they would go great with the rest of the album’s songs.

I love the track order of Pale Honey, where you go from the dreaminess of “Desert”, with its electro-bleeps and extended synth strings pull, to the rockin’ “Tease” that’s driven by a sinister bass line, rolling drums, and clacking percussion.  When you created the album, was it your intent to craft specific styles of songs to showcase different facets of your sound?

Not really; all of the songs came out spontaneously and without a thought of whether it should be a soft song or an upbeat song. We’ve been working with each song for a bit and choosing tempos was a part of the job, but the only song we really changed was “Sleep”.  That went a bit faster in the beginning before we went through pre-production and planning. But all in all, we think that the album follows a specific path and that the songs go very well together as a whole.

What are some of the types of guitars that were used for this album?  The distorted guitar used on “Youth” is very different from the wavering guitar lines found on “Bandolier”…

On “Bandolier” (and “0100” for example) we used an old acoustic orchestra guitar from the 50’s. We plugged it straight into the console, and to get that dry, fuzzy sound that we have in the choruses, Anders turned all the levels up to max so everything got really distorted. It’s a wonderfully dirty guitar sound!  On the other songs we’ve only used Fender guitars (not sponsored - yet - hehe), both an American Stratocaster and a cheaper should-sound-shitty Telecaster-copy (but it actually sounds amazing).

Speaking of “Youth”, at the end of the song there’s a brief sound of a tape being played backwards, I think.  Is that the case and if so, why did you decide to include that in the song?

The three of us felt that something was missing in the song the day before heading into the studio in Paris. We didn’t really know what it was and how to make the end as epic as the song deserved. After sitting with lots of different ideas to try and lots of thinking, Anders just said “Fuck it, let’s reverse the chorus!”, just to change the way we thought about the song, and all of us just went mental. We loved the way it sounded and kept it for an awesome outro!

You’ve played shows in Sweden, but I’m not sure if you’ve played in the U.K. or U.S. yet.  Any plans to gig outside of Sweden or is that for future thought?

We played both at GoNorth festival and Wickerman festival in Scotland last summer; it was fantastic.   And we were really thrilled to play London recently! Hopefully there will also be a couple of gigs in the U.S in the near future…

Gothenberg, Sweden is a hotbed for electro-pop acts these days. Even though you incorporate some electro/synth-work, you’re primarily a rock band.  Do you have any desire to go full-on electronic or is that not for you?

No, right now we just want to keep making the music that we do!