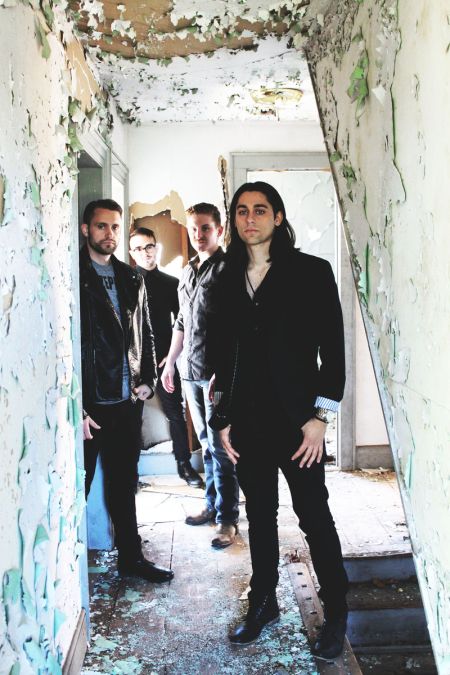 Hi Renal and Gian!  It’s so good to connect with you guys again around the release of your new, and third, EP, Remission, which was released on April 21st.  I interviewed you at Adequacy.net in 2013 when you dropped your previous EP, Drag A City.  How are things going for you right before the release of your new EP?

Hey, thank you for connecting with us again. Things are going really well. We are very happy with how Remission came out and we are excited about all of the positive feedback we have been getting.

How has the past year or so shaped up for you since I last interviewed you?  Based on Remission’s bleak lyrics, I’d say not so well in the relationship department!

Renal: Well it all depends on how you look at it. I think Remission introduces a rebirth and a new adventure, lyrically speaking.

Gian: The past year shaped up really well; we met some great people, wrote, in our opinion, some of our best songs to date, and are continuing to do what we love and grow as artists and musicians.

Speaking of relationships, but of the band member kind, I think you’ve had 3 different drummers in as many years.  What’s up with that and how did you connect with your current drummer, Erik?

Renal: It was hard to let go of the past members. Obviously you create relationships when you are in a band, but we've found the right guy this time for sure. Erik and I met officially at one of our gigs at the Court Tavern in NJ; he mentioned that he would love to be a part of the band. He is an amazing drummer, a really hard worker, and best of all, a really great dude.

What song off the EP will be the lead single?  Have you shot any music videos for the songs off Remission, or are you planning to?

Renal: We don't typically like to look at what we do in terms of singles and such. “Cut a Hole” was the first video released. We have videos for “Images”, “Remission”, and “Been in the Wars” in the works. Check out the “Cut a Hole” video and stay tuned for the upcoming videos.

Remission is like a mini concept album that’s immersed in a tense, brooding atmosphere.  Your instruments, vocals, and lyrics are all shot through with a burgeoning foreboding.  Can you go into some of the details of your creative process in making this EP?  Did you start out with the plan of crafting a concept EP or did it emerge during recording?

Gian: The creative process for this record was very similar to the last one. In fact, some of the songs on Remission were written before Drag a City was even released. We spent a lot of time with the songs this time around and it felt like it was a record that had matured longer and I feel that informed a lot of the aesthetic and also the tone of the album. A lot of our favorite records come across as concept albums in both artwork and song writing so I guess that’s something we do subconsciously try to emulate.

Renal, you lyrics are stark, but vivid, and steeped in religious imagery, specifically of the Catholic kind, with references to the Father, Son, and Holy Ghost, a savior, and starting a religion.  Are these references meant to be taken in a religious way at all, or are they a means of metaphorically expressing the conflicted nature of relationships?

Renal: I don't know what other people go through, but for me I have had a hard time coming to terms with what I believe in. I was raised Catholic, I went to a Catholic high school for some time. It was an awful experience for me for a lot of reasons. Drag a City spoke a lot about being lost and alone. I think while I was writing Remission, I felt angry, I felt like as if I finally had the strength to fight back, to kill the pieces inside of me that others had left as scars and subtle reminders of times when I was weak. A lot of the lines on the record were actually used from a notebook I had written in over 5 years ago. Some of the lyrics reflect times from many years ago combined with the hardships of coming to terms with faith in people and of the divine.

You’ve updated “The Idealist”, which was on your 1st EP, Alpha Decay, and have it as the closing song on Remission.  Why did you bring that song back and why did you decide to re-record it?

Gian: “The Idealist” has a soft spot in our hearts.  It was one of the songs that stood as a sign post for where our sound was headed as a young upstart band searching for direction and I feel it informed all the song writing since it. Instrumentally it was the first track I ever wrote where I felt like I had made something worthwhile and unique. It’s a song that’s been a staple in our live set since the very beginning. We felt we needed to update it and make it a bit grander, in a lo-fi kind of way. We’re really proud of it and think it sounds exactly like we originally intended for it to this time around.

There are a whopping 7 songs on Remission, which is also why I feel like it comes across as a mini-album.  Why didn’t you try for an album of songs (maybe 8 or 10 tunes) instead of an EP?

Gian: Without the support of a label and a team it’s difficult to take on a massive project like self-producing and promoting a full length, debut album. Honing in on a shorter set list, we’re able to realize the songs and get them out in a shorter amount of time. We hope to find ourselves in a situation for our first full length to be recorded and produced in a manner that gives it the sheen of a proper debut.

You’ve listed your EP at Bandcamp, but before the release date, there aren’t any active links to the new songs.  What is your view on making songs available to listen to online before or during a release versus not doing so? I’ve been wondering how beneficial it is for artists to post all their tunes “for free”, in streaming format at least, online; if that drives sales or not.

Gian: We didn’t release any one particular song early because we try not to view our music in terms of singles. I think the album stands as a piece of music in total, and should be listened to straight through to get the desired effect. Posting the music for free is really the only way to go as an unsigned artist, with the idea in mind that you want to get the music in as many hands, on as many iPhones as possible. So as an incentive to download and listen, our music is ‘name your own price’ on BandCamp and available on all the major streaming sites like Spotify and Google Music. If you’re a supporter of the band, you can purchase it on iTunes, or get a physical copy of the CD on our BandCamp.

Can you go into the instruments that you used for recording the EP’s songs?  You have very distinctive guitar sonics (the reverb, the ringing, the reeling…) and I’m curious to know how you achieve these sounds.

Gian: My Fender Tele is a really beautiful instrument. I love it like a child. I think the sound is just a combination of my playing style and what I think sounds cool sonically. There’s a lot of organ and female choir vocals on there as well.

What are you future musical plans?  Will you be working on a debut album soon or will you be collecting all your EP material to release as a compilation album?

Renal: Right now we are focused on getting the music videos out there; we believe that it is an integral form of promotion and it’s a lot of fun. We have some shows lined up for the summer and possibly some traveling for us. At the moment we aren't really focusing on what we will be releasing next as we are putting our energies into promoting and enjoying Remission.