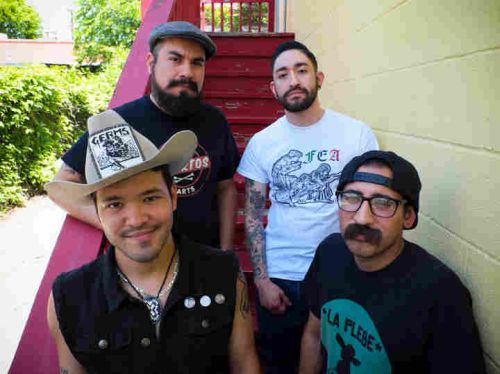 Alvaro, the man behind the Tex-Mex/punk rock hybrid band, delivers details about the act’s unique and rousing sound, upcoming tours, and a whole lot more.

Heya Alvaro!  I recently found out about your band, Piñata Protest, and wanted to find out more about you and your music.  You formed the band in 2006 and I think you’re the only original member left standing.  Is that true?  Who else is in the band currently and what instruments does everyone play?

While I am the only original member, I’m happy to say that through the years, as members come and go, the band has only gotten better and better. Right now the other band members are: Jose Morales who is on guitar and vocals, Marcus Cazares on bass and vocals, and JJ Martinez on drums.

Your songs are a smashingly celebratory fusion of tuneful, accordion-led Tex-Mex style and punk rock aggression topped off with vivid, thought-provoking lyrics.  How did you hit upon this musical combination?

Thanks!  At its core, the sound comes from the Tex-Mex (Norteño, Conjunto, Tejano, Cumbia, country, etc…) music I grew up listening to and punk rock, which I discovered when I was in high school, but the motivation to combine them came from a desire to create a new sound never done before.

After dropping an EP named Plethora in 2010, you released your debut album El Valiente in 2013.  It’s a super-rousing, tasty platter with some incisive commentary about bicultural living.  Are you the main songwriter in the band?  What is the most important take-away from that album, lyrics-wise, in your opinion?

My favorite song to play and the most personal song from that album is “Life On The Border”. It deals with the alienation that comes from being born and raised in the middle of two worlds and not ever feeling like you truly belong to either. To me, the rest of the songs whisper hints of that same idea, but for the most part have their very own voice. I am the main songwriter and I like to try and make each and every song unique.

Listen to "Life On The Border"

I think the most fun song on the album is “La Cucaracha”, which you blaze through in high spirits.  I’ve heard the song long ago and was wondering if you kept the ‘original’, Mexican Revolution-era lyrics or changed them to you own.

The lyrics in the original are pretty rousing in themselves - I had to use them! The original song however does have many more verses that we don’t even go into and instead stick to the opening line about the marijuana smoking cockroach, a crowd-favorite topic.

How did you connect with the Saustex record label?  Is that the label that released El Valiente?

I wish there was a more interesting story attached to it, but it all went down after Jeff Smith (owner of Saustex and singer of The Hickoids) came up to me at a show and asked if I’d be interested in being on his label. I was a fan of The Hickoids and admired what they had done for the cow-punk genre. I was thrilled. El Valinte is a duo release by Saustex and Cosmica (Carla Morrison, Gaby Moreno, Charranga Cackewalk).

What is your most fave Tex-Mex band and most fave punk band or are there too many to pick just one?

Based on who I find myself singing along to the most while I’m driving or stuttering along to after a few beers, that prize would have to go to Ramon Ayala in the Tex-Mex catagory. For punk rock, there’s nothing that gets me going like The Fearless Iranians From Hell.

You’re located in San Antonio, Texas.  What is the state of the state, or at least the region you live in, these days?

It’s getting pretty crowded here these days. There’s a lot of new development and transplants from outside Texas moving to San Antone. While it’s refreshing to have people here from other parts of the world, it’s scary to think how it’s also slowly taking away from the unique culture we have here. So it goes.

It seems like Piñata Protest is always on tour!  Would that be a fair assessment or do you take off for the occasional vacation?

We do tour a lot and we love it. Most recently actually, we’ve been off the road to concentrate on a new album. Our next tour is with Voodoo Glow Skulls in late September 2015 and we’re hoping to hit the road hard in 2016.

I think you just played a show on July 14th with Jello Biafra also on the bill.  Did you get to meet and hang out with him at all?

We did! The band got to meet him and I had a chance to talk to him a bit. He said he dug the band and our mix of sounds. We talked about records a bit. We both are fans of Mano Negra it seems.

How did your upcoming tour with Voodoo Glow Skulls take shape and how long will you be on the road?

We grew up being big fans of Voodoo Glow Skulls (We’re all High School band nerds). We met them a few years back after we opened for them in Corpus Christi, Texas. Since then we’ve kept in touch and have played a few shows together, but have always tried to make a tour happen – and here it finally is! This one’s a shorty, only a week and a half, but hopefully we can do more.

You must have a ton of amazing and crazy memories and stories from touring so much.  What is your most memorable (good/bad/wild) experience so far, gig-wise?  Would you say playing SXSW was a highlight?

What happens on the road stays on the road… (wink). The most memorable gig, at least for me, was the very first one, on a sidewalk, unplugged, in front of Snaps Skate Shop (RIP) surrounded by a circle of punks who decided to stay and hang out after the cops broke up the show in the DIY warehouse next door. It was the first show I ever played accordion for or sang for. The crowd moshed around and danced. I knew then that this band would be a big part of my life.

Not only are you in Piñata Protest, but you’ve also formed a Tex-Mex act with Jose called Los Callejeros!  Where do you find the time for two musical projects?  Is Los Callejeros in the traditional Tex-Mex style or do you mix it up with other musical genres?

I’ve always had an admiration for street musicians and through my ever-continuing search for new music, I’ve found myself getting more and more into what I like to call roots music; the music made and recorded at a time where most instruments were still acoustic. Los Callejeros de San Anto was the answer to both those passions. While we mostly cover some of the classic and better known Tex-Mex, Cumbia, and country songs, we are planning to delve into covers of classic punk and rock covers and play them in a more Tex-Mex manner.

One thing I really like about playing with Los Callejeros is that it’s an opportunity to share in and experience a whole other spectrum of emotions that I would have never had the chance to experience in Piñata Protest.
Showing up unexpectedly at a mother’s door on Mother’s Day and making them tear up with a traditional cover of “Volver, Volver”… Wow. Now that’s music.

What is this I hear about you having a beer named after the band by the Freetail Brewing Co.?  Is it still available?

Freetail Brewing released a delicious beer named Piñata Protest back in March 2015 and we threw a big free show in San Antonio for its release. We were so excited and we got nothing but good feedback about it. It was a limited run and is still available at a few stores in San Antonio while supplies last. Get some now! Hurry!

Is a second album in the works for Piñata Protest, or maybe an EP or run of singles?

Right now we’re working on a bunch of new songs. We’re not sure at the moment if we’re going to release an album or another EP, or singles, but we do plan to release SOMETHING!