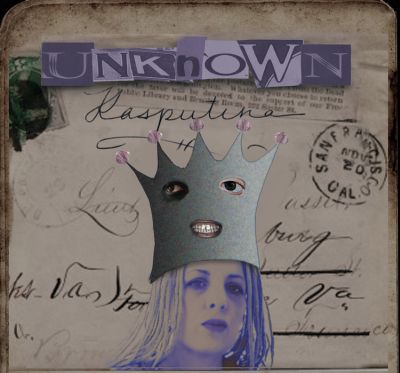 Melora Creager sheds some light on her latest solo album under the Rasputina name and her traumatic year after being hacked online.

Hello Melora!  It’s such a rare delight to have this chance to chat with you, although unfortunately it’s via email and not in person!  You have a sonically intriguing and lyrically striking new album out since April titled Unknown under the moniker Rasputina, but it was 100% your own creation with no collaboration – and you finished it in 3 weeks in a dank basement studio no less!  The resulting album is not lo-fi or tossed-off at all.  What kind of recording equipment and processes did you use and was it a challenge to record in this manner?

And I only used one, single mic! A Soundeluxe E47- it’s a Neumann copy, really nice. I use Protools, and that’s it really.  Stylistically, I set myself the assignment of “no rock”, and all organic sounds - that was a challenge. It’s easy to record alone.

Unknown is richly composed with various stringed instruments, percussion, and your versatile vocals.  What are some (or all, if you have the time/interest to list them!) of the instruments that you’re playing?  Did you have to suck on helium to do the ‘crowd’ voices on “Pastoral Noir”?

Cello (of course), dulcimer, banjo, drums…I think that’s all.  It’s such a blast making those little plays, like “Pastoral Noir”. The high-voiced nymphs are achieved by time-shifting (a computer thing).

This past year you’ve had to endure the traumatic experiences of being surreptitiously monitored and hacked online and on your physical computer where you’ve had your identity stolen and your computer corrupted to the point of not being able to access anything on it at all.  For most of us in this modern day social network-(dis)connected world, our lives are on our computers.  I can’t even imagine the loss and the travail of building yourself back up again in online/computer form… How are you coping with the fallout at this moment?

I just started everything over. I’m trying to trust people again. Life is better having gone completely off the Internet and come back fresh and clean.

What you’ve been through has totally informed the themes of Unknown.  You address, either directly or metaphorically, the ideas of being hunted (“Unicorn Horn Mounted”), having secrets that aren’t meant to be exposed (“Indian Weed”), fake connections versus real love (“Sensed”), and trauma (“Taken Scary”).  On the lyrical centerpiece of the album, “Psychopathic Logic”, you deal with your nightmare head-on, describing a perpetrator who has “no empathy” and who is “so empty”; someone who can only see what’s on a screen, but is blind to real human interaction and who wants “…to own the girl / to own her world.”  How difficult was it to write down the raw words of this song?  Was writing about and recording your experiences a liberating feeling; perhaps a reclaiming of what was taken from you?

I didn’t want to do it - write those songs; look at my own trauma. It was really hard. I’m a “nicey-nice” person; don’t like confrontation even with myself. In some ways, I was mistaken or deluded about what exactly happened, but by writing a fantastical version of what I thought, I got purged of some of the toxicity of the situation.

I heard from so many fans who had been through similar, even worse, experiences. I’m glad I made a record about stalking trauma, to share it with others. Not to be embarrassed or victim-ish.

Although you’ve been badly battered by this invasion of your personal privacy, I feel that you are not broken in spirit.  There is a defiant, and even uplifting, streak running through your album, where you reaffirm that love is a real and human emotion – and it still exists; that maybe you can let go of any remnants of (justified) paranoia (“She stops reading…into things” on “Emily Dickinson’s Trophy Envelope”).  Even an instrumental with wordless vocal sighs (album-ender “Hymn of the Wormwood Women”) has a quiet strength to it.  Would you say that this is the take-away message of Unknown; to dust yourself off and pick up the pieces from whatever life has thrown at you?

I’m glad that’s hearable - the uplifting or triumphal undercurrent.  People have much worse problems - this was mine. I was all alone with it - no support except from fans, who are really online strangers. Strange.

My interpretation of the first song off the album, “Curse Tablet”, is that you are remarking upon the dichotomy between a fake persona and a real person; that when we engage online we are putting on a mask, so to speak.  Is that the aim of your lyrics or am I misinterpreting them?

Yes, it has nothing to do with the stalking - I wrote that song before the experience began. It’s about our Shadow self— acknowledging that dark side of ourselves, maybe even liking that side, and saying, Bye-bye.

You’ve had to close your online accounts due to the hack, but I see that you still have a Web presence with your official site and Facebook account.  Uknown is available as a physical CD only that can be purchased at your official site for a decent price.  Is this the only method of obtaining the album?

Your latest blog post at your official site describes an interesting change in your outlook.  You were once a “shy misanthrope”, but are now embracing being a “people person”.  Just curious if this change in view is easy for you or if you have to work at it!

I went through such hard emotional times, but in a way, I wouldn’t trade it. The benefits in outlook that I earned- through effort- are beautiful and do stay with me.

Speaking about people, you will be performing in front of audiences for the first time in about 2 years when you kick off a national tour on July 23rd.   Who will be joining you onstage and what will the setlist look like; new material only or a smattering from past albums too?

Luis Mojica on vocal beat-box and piano, and Carpella Parvo on cello and vocals. We all use looping pedals - so fun. Old and new, definitely.

You occupy a unique musical niche with your cello-driven, lyrics-centric, sometimes historically-themed indie rock.  Why did you pick up the cello instead of guitar (or violin or…) and what was the spark that ignited the idea of Rasputina?

My dad wanted one of us kids to play the cello, and I was a dad-pleaser. I liked it because it is so big, too.  I got tired of no one being able to hear the cello over the guitars, so I said I’ll make an all-cello band. Then you’ll hear it, for sure!

New Album from Motörhead in August