Interview with The Bronx 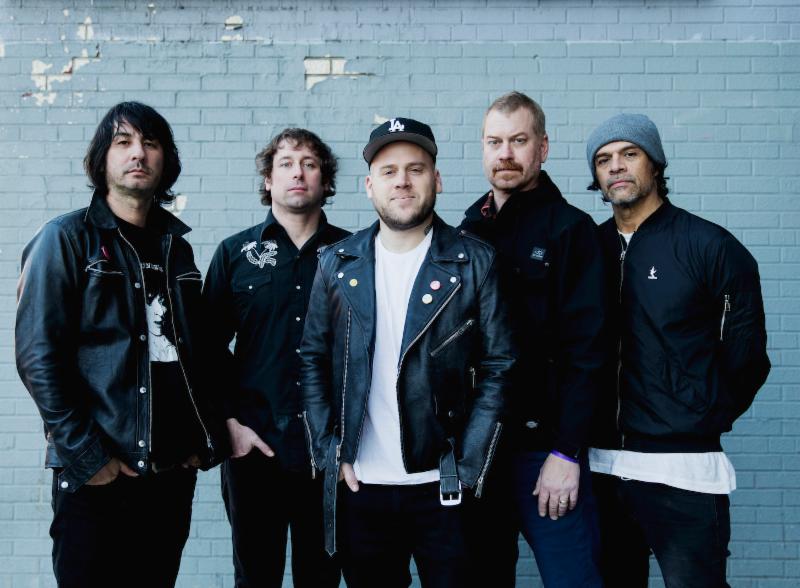 Matt Caughthran, the vocalist of LA-based punk/rock band The Bronx, reveals details about 5th album “V”, which is out today on ATO Records.

Los Angeles-based hardcore punk/rock ‘n’ roll band The Bronx has been going at it since it formed back in 2002.  The Bronx has dropped four studio albums, with a fifth, titled ‘V’, out today via ATO Records, as well as releasing mariachi records as Mariachi El Bronx.

Matt Caughthran (vocals), Joby J. Ford (guitar), Ken Horne (guitar), Brad Magers (bass), and David Hidalgo, Jr. (drums) have recently tantalized listeners with two tracks off “V”, the blistering grit of “Sore Throat” and the Southern rock sizzle of “Two Birds.”  The tunes move in a different direction than the band’s traditional no-frills, intense musical approach.  But The Bronx is always evolving and ‘V’ marks the next, vital step in the band’s journey.

Despite it being crunch-time before the release of ‘V’, Matt graciously took some time to dig into the details about the LP, The Bronx’s upcoming tours, highlights from the past, and plans for the future.  The interview took place just a couple of days before ‘V’’s release.

Hiya Matt!  I’m so excited to have this opportunity to touch base with you ahead of the release of your 5th studio album, “V”, which comes out September 22nd.  That’s really, really soon!  What are the pre-release vibes like?

Pre-release vibes are high!  Looking forward to the release day and playing some new tunes on tour!

Amped up lead single “Sore Throat” is classic The Bronx, while electrifried (Yes, the misspelling is intentional.) single “Two Birds” introduces psychedelic guitar and a retro stomp to your more hardcore punk attack.  Is this a facet that you explore further on “V”?

Not really, we always try to stretch it out and write some tunes that force us in a different direction. Those are the songs that balance out the record and keep people scratching their heads. "Two Birds” is one of those jams. It’s like sex in a spacesuit.

What else can we expect from this new record in terms of song structure, instrumentation, and/or the recording process?

It’s definitely our nastiest sounding record.  Lots of cool sounds, lots of vintage gear and sleazy vibes.  No real adventures in song structure. Just wanted to keep it simple. Rob Schnapf produced and mixed the record .  He’s a true badass. This was a no-stress record. Everyone was on the same page. It felt fucking awesome.

What themes do you tackle this time around?  I’m assuming that the disastrous and destructive events in the US (perpetrated by the President and his administration and followers) this past year has given you plenty of material to work with!

Haha. Absolutely! The current social and political climate in the US is impossible to ignore. Lots of vibes all over this record, political and social unrest are definitely two of them. The Challenger explosion, the Menendez murders, police brutality, riots, suicide, depression, and self-expression as a nuclear weapon.

You’re kicking off a 2-month tour of the US in LA on the album’s release date, with a stop at the White Oak Music Hall in Houston.  Is that show still on after Hurricane Harvey decimated parts of the city?  Do you have anything special planned for that gig?

Houston is such an amazing city. We’ve played there a lot over the last 5 or 6 years with both Bronx and El Bronx. As of now the show is still on. We’re looking forward to giving the rock and rollers of Houston an outlet for their devastation. We’re gonna do everything we can to ease the pain and make the night special.

After the US tour, you’re flying out to Australia, playing with Pennywise for a run of dates.  What necessities do you pack for a long-distance international trip?  What rarities do you like to bring back from, or at least sample in Australia?

I travel pretty light these days. Nothing worse than a giant suitcase.  Australia has a cool art movement so I try to catch up on that whenever there. I prefer a cold Coopers over Vegemite, and some homegrown dirtweed over the boomerang. Last thing I brought home from Australia was a tattoo that says “scarred for life”. It’s an homage to legendary ozzie rockers Rose Tattoo.

Did Joby do the album’s cover art?

Yep! He’s done every Bronx and El Bronx cover to date! He’s an an animal.

You’ve released 3 records as Mariachi El Bronx.  What spurred you to take on the mariachi musical style?  What do you get out of creating this type of music?  Are you planning on composing another mariachi album?

We just needed/wanted to try something different. El Bronx is probably the best thing we’ve ever done. Inspiration and creativity in there purest forms. There will definitely be another record somewhere down the line. Shout out to all our El Bronx peeps!

We’ve been in the trenches. We pretty much work non-stop between the two bands. If we’re not touring, we’re writing, and vice versa. Plus, along with management and label, we work all the day-to-day bullshit that makes the band tick. It’s a 24-7 / 365-type of gig and I wouldn’t have it any other way.

I know this goes way back to your debut album, but I wanted to know what it was like recording in Gilby Clarke’s kitchen.  Was that as rad as I think it would be?  Was Gilby a cool cat as a producer?

Gilby was, is, and will always be “The Man ". There were so many moments in the early days that were so pivotal in shaping the band’s identity. Recording with Gilby definitely leveled us up. He took us in, let us do our thing, and then sprinkled some of his rock and roll magic on it.

You formed The Bronx in 2002 and it’s been a wild ride since then, I’m sure.  What memories keep coming back to you when you reflect upon your career?

We have been so fortunate. There are too many memories to pin down. Touring across the states in a van for the first time, dancing with death on several occasions, shows that are so mental they don’t seem real, lifelong friendships formed with amazing people from around the world. Starting a mariachi band. Recording every single record, being inspired and challenged by fellow musicians, having to get a new passport cause your old one is full, on and on and on. I’ve spent at least 30% of the last 15 years laughing so hard it hurts. Beyond thankful for everything music has done for me.

In the year 2017 the world, “spiritual” and otherwise, seems to be “upside down and inside out”.  Are you inspired or frustrated, hopeful or malcontent?

All of the above. I try to channel the frustration into inspiration. That’s where the hope seems to come from nowadays.