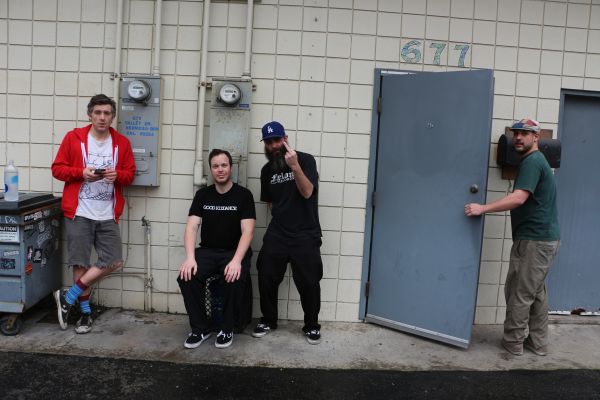 LA-based punk band Emmer Effer is set to drop debut album From The Bottom Down on October 6th via Felony Records.

Emmer Effer is a four-piece punk band from Los Angeles, California. Three members of the band were raised on South Bay punk rock, while Jake the drummer was raised on the punk sounds of the Pacific Northwest. This meshing of styles has resulted in a straight forward punk sound that is fast and to the point. Most songs are purposely kept under two minutes and guitar solos will not be found.

Founded in 2012, the band released their first EP, Dead Men Tell No Lies, digitally on their own Emmer Effer Records in 2013. In 2016, Felony Records signed the band and released an EP on vinyl called The People Are The Answer.

Emmer Effer headed back to Screaming Leopard Studios in Hermosa Beach in early 2017 to record their first full length with Ian Peterson, who has previously worked with Pennywise and Chaos Delivery Machine. The band spent a total of four days in the studio recording 19 songs.

The songs on the album hark back to that mid-90s South Bay sound reminiscent of 98 Mute and Pennywise. Lyrically, Emmer Effer's are a glimpse into the everyday realities that many people go through, such as death, drugs, love, politics, and friendship.

Rebel Noise premieres a track off the album, the short, sharp, and straightforward "She Bite".  Are the lyrics a sign of the troubled times in the US, where residence in Canada might be preferable to being targeted in the US by a divisive and destructive President and his administration and followers?  Actually not, but it's still an earful even at its one-minute running time.

Band member Kevin Wells explains it's something closer to the heart, revealing, "I wrote the song about a my girlfriend, Lizza, who I had just started dating. Originally, it was recorded as an acoustic song for my KW and the Killer Whales solo thing that I fuck around with when I get too stoned, drunk, and bored. One night after drinking, I messed around and made it into a punk song. I showed it to Emmer Effer as a joke, and to my surprise, they liked it and wanted to record it. I never wanted love songs to be anything Emmer Effer did, but I guess life is funny like that."

Emmer Effer's debut full-length, From The Bottom Down, comes out October 6th via Felony Records.  The album is available on vinyl, CD, and digital download.

Interview with The Bronx