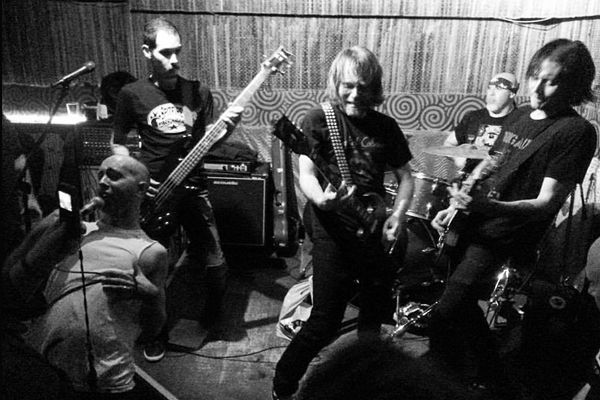 For the sake of readers’ sanity – I mean, clarity, here is the band member key:

Heya guys!  OK, so on record you’re a bunch of fun-lovin’ punks into your dynamically ragin’ and super-melodic tunes.  Who are you when you’re not in World War IX?

FP: In order of legal responsibility I am a husband, office manager, and musician. I have an envious list of associates and friends that makes balancing all those responsibilities look easy, but just like the person I am in World War IX, it’s a lot harder than it looks.

JM: I work in TV, and make comic books about the joys of playing in a thankless punk rock band and drinking too much (or too little).

JK: I’m the drummer and in my real life I create problems for people and then solve them.

BJ: I like to drink beer and play video games. I work in IT.

You just bowed the snarktastic video for “Thank God It’s Monday” (Hell, the title alone is a kick in the pants!), a follow-up to another wacky vid for “Have You Seen My Drugs?”. Where do you come up with the ideas for your eye-poppingly wild and hilarious music videos?  Do you have a go-to director for them?

FP: Our liner notes all say all songs are written and recorded by World War IX. We have a long list of people that have contributed to the WWIX War Effort (copyright/trademark/.com pending) and have done so with the understanding that they are participating by adding the best of their abilities and availability, making WWIX a thing that we all want to be the best it can be. This way, the band can play and record whatever we want, and none of the band members can sue for royalties. Also, I am contractually obligated to say Justin comes up with all the good ideas. Our go-to video director is Johnny Celentano. For rate information, e-mail johnnycelentano@gmail.com.

JM: Our ideas come from when we get together for band practice and hash things over with each other.  “You know what would be funny….” “That sounds stupid, I hate you.”  That kind of thing. We do Johnny Celentano for our videos, and he plays in a phenomenally raucous, and super-silly punk band called Citizen Blast Kane.  We share a similar inane sense of humor and know that the second we take our selves too seriously, we’re done.

Are you NYC natives or transplants?  Has the city affected your music or would you be cranking out sarcastic firecrackers even if you were living in the Caribbean?

JM: I was born in Pittsburg, but I was raised in the magical kingdom just east of NYC known only as… Long Island. My family moved to Manhattan in 1989, and I’ve been hating the public transportation system every day since. So yes, in a sense living here has certainly shaped my particular brand of urban blues.

BJ: I'm the only native. I live in Brooklyn but I'm from Queens. Hard to say if it'd have turned out differently if I grew up somewhere else. I had an hour-long commute to high school so that was a lot of time to listen to music on my skip-resistant Discman.

JK: NYC is the sarcasm capital of the world. You just can’t live here and not be funny, ‘cause unless you’re able to see the brutal humor in your everyday life and laugh about it, you’ll go crazy. You won’t last. NYC gave us The Marx Brothers. That’s the beginning and end of it right there.

FP: I moved to NYC on December 31st, 2003 with two suitcases of clothes and a guitar. This has always been my natural disposition. If anything, the cesspool of opportunity that is NYC has given me more of a chance to find like-minded individuals. If I am one in a million, that means there’s 8 more here just like me. If I lived in the Caribbean, I would probably just work at the airport selling shaved coconuts to tourists.

Forgive me for not knowing your whole catalog, but do you address politics in your music, especially in light of the detrimental and dangerous downward spiral going on with the American President and his administration and followers?

JK: That guy sucks. We figure we can best help out by providing a little humor and inviting folks to laugh with us, drink beer, and read some comic books before they go back to the brutality of their news feed. (For sick political punk check out NYC’s All Torn Up)

JM: With the sack of shit that currently resides in the White House it’s hard to not take a stand, but generally speaking (for myself) I’m too self-absorbed to get into politics.

BJ: I've contributed about six words of lyrics in total so this is not my department.

FP: First off, you gotta forgive yourself because I am not here for that. Second, just because things seem terrible now doesn't mean that they haven’t always been terrible and won’t always be terrible. That’s why bands like World War IX are so important. In such serious times, we are an oasis of not taking your problems too seriously (wink). Third, I have always trusted my bartenders more than my presidents.

Actually, you band name is pretty apt these day, what with genocidal dictators with a nuclear arsenal ruling more than one country.  Have you experienced any conflict first-hand?

JM: Not on a geo-political level, but man… you wouldn’t believe how rude the sommelier was to me when I was dinning at Café Luxembourg last week.  He tried to tell me that if I was in deed having the lamb, that I should be going with a 2013 Rombauer Chardonnay instead of the 2009 Gunderloch Riesling.  A 2013 Chardonnay?!  Please, I wasn’t born in Philadelphia.

JK: Definitely, this weekend someone ate all of my onion dip.

FP: I have experienced countless random NYC street conflicts. I have found that crazy people are not limited to race, religion, creed, body type, or gender identity.  It can happen at any time. Whether it’s going to work, band practice, or date night with the wife, you have to be ready for someone to lose their shit at or around you for any reason, your fault or not.

BJ: I have not yet personally experienced any nuclear war, but give it a few months!

The artwork for your record covers is ace!  What the story behind that (because I know there is one!)?

JM: I wanted to capture the suffocating frustration of working in an officule [Hmmm, a new word from ‘office’ and ‘cubicle’?] day in and day out that so many of us lucky enough to have a job can experience. Thankfully, I love my job, and it doesn’t look anything like the image I drew, but trust me, I’ve been there.

Have you ever thought of doing a duet with Lana Del Rey?  Ummm, yeah, sorry – I don’t know where that came from!  But, you know, is there anyone you’d want to banter with on record?

FP: I would have no problems working with Lana, on the right project. If I had to choose one person it would be a 16 year old me, so I could tell me, “Calm the fuck down and relax. Everything’s going to be fine, see?”

Do you have any future musical plans, like another EP or gosh ding dang darnit, maybe a whole full-length?

FP: One of the things I’m excited about is that we’re testing the market response on putting out a “Best Of” release with maybe a new song or two. If anyone wants to weigh in directly, our social media lines are open.

JM: I’d love to write another full length, but dagnabbit, I don’t have the time to write that many songs!  I come up with riffs constantly that sound good in the moment, but when I go back a few days later they sound like junk, or exactly like something else we’ve already done.  It’s hard being me.

JK: If we waited until we had 12 new songs for a full length we’d be releasing one album every 3 years. So as soon as we write over 2 new songs, boom, right into the studio.

BJ: I'd like to do a full-length, but Justin hasn't written enough songs yet.

Have you found that the amount of beer you can drink is inversely proportional to your age yet?

BJ: Thankfully, not yet.

FP: I have never been able to drink a lot of beer. I have a low tolerance. That makes it very inexpensive to get drunk and maintain.

JK: Yes and we have to keep practicing or we’ll never get it right.

Which 'hair metal' band's song would you most want to cover and why?

JM: Easy, “We’re Not Going To Take It” because it could easily been a lost Ramones classic.

BJ: Is Van Halen a hair metal band? I think so. I'm sure Jon will correct me if he's wrong.