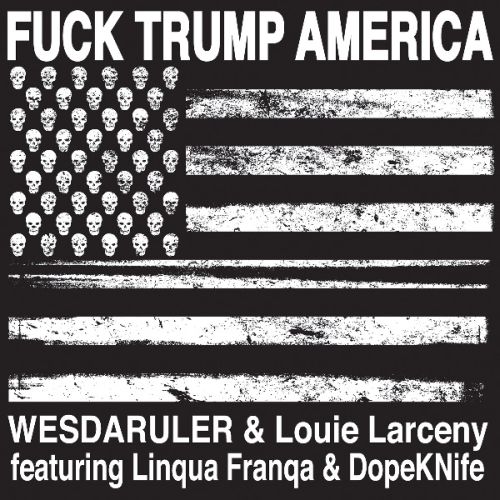 Athens, GA-based hip hop producer and beats-maker Wesdaruler just unleashed a powerful and relevant protest anthem ahead of the 4th of July weekend.

The lyrical powder keg that is “Fuck Trump America” hits back at the brain-dead followers of the diabolical Trump who has been destroying the United States of America since he slimed his way into office.

Trump’s zombies blindly praise him when all he does is spew hatred and lies. Trump (and his minions/administration and devotees) deny truth, facts, science math, civility, education, progress, climate change, the viral pandemic, and human, women’s, racial, ethnic, and LGBTQ+ rights.

Why anyone would want to vote for this evil being who is dismantling laws/regulations that protect us and our environment, who doesn’t believe in making the future better for our children, who is disrespectful and relentlessly bullies and attacks others, and who is only interested in himself at the expense of the rest of us is beyond comprehension.

Wesdaruler and his talented contributors, Linqua Franqa, Dope KNife, and Louie Larceny, all get to say their piece on the furiously emotive track that mainly targets the oppression of black people in the US and champions the Black Lives Matter cause.

The song actually first dropped a few weeks ago on an episode of Linqua Franqa and Dope KNife's hip hop and politics podcast Waiting on Reparations: https://open.spotify.com/episode/4N7afhbFOEgoXWHL1pDsIv?si=qrrIEuvjS6uET-DC5NXiEA&utm_source=Facebook_SimpleMusicStories&utm_medium=sms

About “Fuck Trump America,” HHBTM Records states, “The message is loud and clear in the lyrics, no statements need, the track is the statement.” It’s a timely take on, “life in America in general, but especially during the Trump administration.”