In which Keith Rosson implores the reader to consider that nostalgia can at times be soothing and wonderful and lovely, and other times be the stifling death-kiss of creativity, a kind of skeletal half-life propped up and limping around, trying vainly to resuscitate the emotional impact of the past.

The cover to Minor Threat’s Salad Days 7” is iconic. No joke. A Glen Friedman photo, it features the band sitting on the stoop of the Dischord house, and it’s one of those images – like the Misfits skull or the Black Flag bars or Ed Colver’s photo of the guy airborne upside down in the middle of the pit – that are just part of the punk lexicon by now. It’s an ingrained image. There’s a kind of muscle memory there. It’s formative.

And listen, I like Minor Threat. I mean, I liked them more when I was sixteen, but I think that’s kind of the point. I can rarely give their records a spin these days and still recognize that they were and always will be a ferociously good hardcore band. I listened to them constantly as a younger person. The banked fury in “In My Eyes” and “Look Back and Laugh” literally gave me chills for years. Every time. I found their singles collection on cassette in my rural fishing town’s Fred Meyer’s – a testament if nothing else to the impressive distribution efforts of Dischord Records in the early ‘90s – and the Out Of Step 12” soon after. Then, of course, the discography CD – as ubiquitous as it soon became (that thing was eeeeverywhere) – was like a disc carved from gold. I hope they continue to be a starter band for kids getting into punk forever. They’re a classic band with hardly a misstep in their discography.

So. This brings us to present day. Minor Threat’s been broken up since 1983. The Salad Days 7” came out after their breakup, in 1985. Last month, the members of the band – Brian Baker, Ian Mackaye, Jeff Nelson, and Lyle Preslar – got together and hung out, and Baker posted a photo to his Instagram account that recreated the Friedman image from Salad Days under the caption “Senior Threat.”

It was, undoubtedly, a cool moment. That kind of circuitousness is neat, that sense of coming full circle. There’s a level of self-awareness there, and also a kind of playfulness that can be pretty lacking in the annuls of hardcore.

But here’s the thing: the internet exploded. Even after Baker’s insistence that there was nothing to it, theories as to the photo’s meaning absolutely flooded social media. It was just four ex-band mates hanging out the Dischord house, taking a picture, a nod to the past; they’d recreated the photo before, apparently, but this was just the first time that Baker had decided to throw out into the yawning void of the internet.

Still, calls for the band to reform were frenzied, numerous, and fierce. Speculation was rampant.

“Tour with Off and Bad Brains!”

So here comes the part where I sound like a joyless, crotchety asshole. I know we have tons of other shit to worry about. And I’m just some guy, blathering shit. People can do what they want, and my hot take is no more valid that anyone else’s. But I can honestly think of very few things more depressing and stifling and sad than the notion of watching four men in their fifties lumber around a massive stage trying desperately to capture the urgency and rage of songs they wrote when they fucking teenagers. A Minor Threat reunion, especially one in a venue that would undoubtedly be necessary to fill the space for their audience, would be a sad-ass affair. There’s no shortage of folks that would be interested, for sure. But that doesn’t necessarily mean it should be done.

Like any other microcosm of a minute, specific niche – printmakers that only use moveable type, radio-controlled race car drivers, Civil War reenactors - punks have a tendency to romanticize the past, and to blur over any inconsistencies or difficult sections. Couple that with our fetish for obscurity, and it’s clear that we’ve never been particularly good at self-reflection. It’s a trait inherent in humanity, I think, and no more brazen than when it comes to propping up relics of the past.

I’d personally like to request that we let our classics stay classic. Let the Minor Threat discography stay flawless. Stop insisting on the exhumation of these artifacts, insisting that their creators bring them back to ragged, half-assed life. The guys in Minor Threat have of course gone on to do many other greatly admired musical projects, and some of those projects are still ongoing. They’re not done making music, and it’s not like I think there’s some threshold where older folks need to chill in the music-making department.

But the past is the past, and while there’s no shortage of incredible records from the formative years of punk and hardcore – I mean, the list is long and varied, for sure –there’s some fucking incredible music being put out right now. Wild, vibrant bands that should be heard. Punk’s never gone away, and it keeps moving relentlessly forward. I wish we’d let our heroes age gracefully. I mean, if the Minor Threat dudes wanted to reform and go play a series of insanely packed festivals, that’s fine. Fuck it, whatever. Other bands – even bands of the same era – are doing it, and plenty of folks seem very happy with the results. And like I said, we have a lot of bigger problems, right? To me there’s something a little sad about it, like the guy at the bar that weepily can’t stop talking about high school. I guess I just wish that we could stop pining for a watered-down, inevitably lackluster version of the past rather than embracing the present.

Besides, I mean, there’s no fucking way that band’s getting back together. 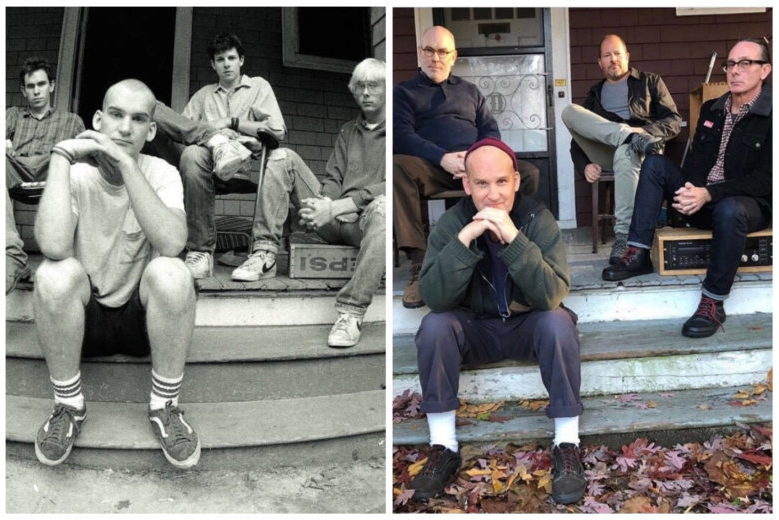 Song Premiere: “Miracle” by The Warhawks