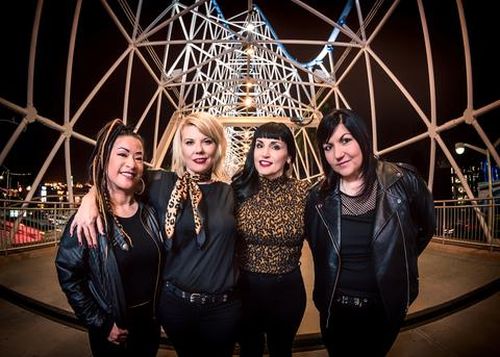 Los Angeles-located (pop-)punk band Bad Cop Bad Cop are back on the musical beat with The Ride, a timely political and personal album that was released on June 19th via venerable punk label Fat Wreck Chords.

The D-Composers-produced (AKA the production team of Johnny Carey and Fat Mike) LP hits a relevant nerve with bold and resonant lyrics/music that finds happiness and uplift amid the catastrophic times we now live in.

Bad Cop Bad Cop raged against the machine on 2017’s Warriors, but now they strike a balance between justifiable anger and empowerment and change for the better.

Singer/guitarist Jennie Cotterill points out, “I think anger is a legitimate and understandable reaction to injustice and wrongdoing. It’s just that for myself, I am trying to move past ‘reaction’ into productive ‘response.’”

The fierce and fast “Pursuit of Liberty” (written and sung by bassist Linh Le, with mighty drumming by drummer Myra Gallarza) is an all-out tuneful and relevant Bad Religion-imbued track that blasts the anti-immigration policies put into place by Trump and his administration, while the lyrically positive sing-along “Simple Girl” is an up-beat jam about female power and diversity.

About the album’s songs, singer-guitarist Stacey Dee states, “These are political statements — self-love is a huge fucking statement. [It] means putting a fix on the problems at home before trying to fix everything in the world. It's asking people to find it in themselves to create the life that they really want to have so they're not in turmoil…”