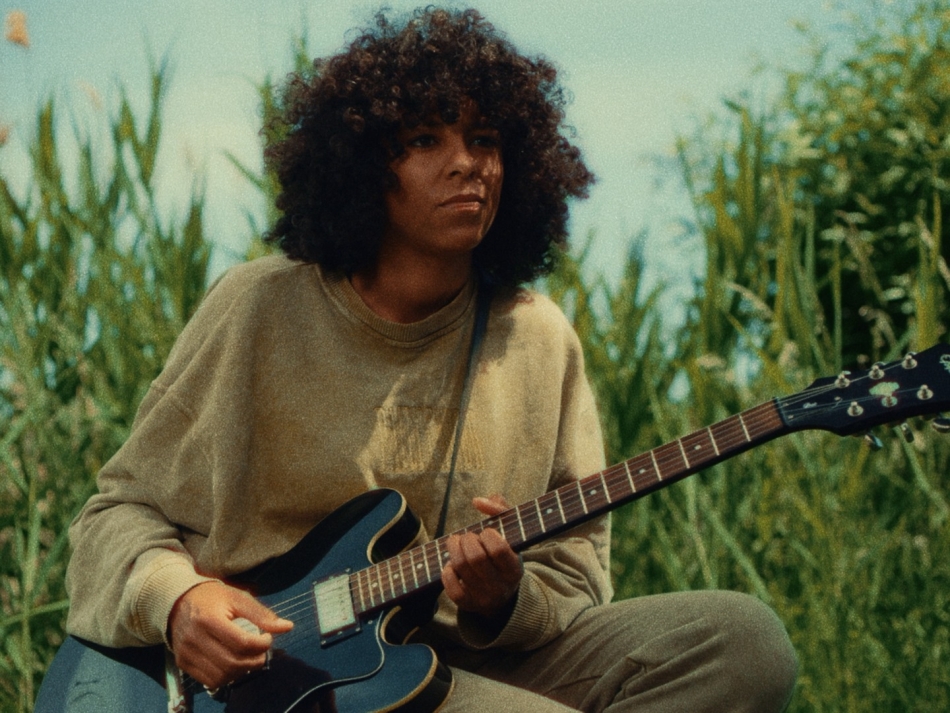 Though language is used as our inherent means of expression, it too often can confine us, boxing us into categories and definitions that only seek to repress us. Wye Oak’s upcoming EP, No Horizon, is a collection of five tracks with duo Jenn Wasner and Andy Stack who continue to evolve their craft, this time teaming up with the Brooklyn Youth Chorus. Their lyric video for “AEIOU” with artwork by Eva Claycomb and animation by Bradley Hale is a hypnotizing bleed of various black and white outlines and shapes, complete with captivating sounds and an encompassing chorus of voices enveloping Wasner’s vocals. If you speak my name / Use my real name / The one I gave myself, sings Wasner, asserting identity and stance over those that aim to minimize one’s personal power. Their EP comes out on July 31st via Merge Records and will be released on pink vinyl. They’ve also partnered with Rough Trade for an exclusive and limited run on 400 purple vinyl with the sleeves autographed by Wasner and Stack. You can pre-order the limited run on purple vinyl here or on pink vinyl here.

The fruition of Kestrels’ fourth album release, Dream or Don’t Dream, took place on Tim Wheeler (frontman for 90's UK act Ash)'s couch, where singer and guitarist Chad Peck was staying for a period of time. A series of remarkable collaborations then took place, from John Agnello (Sonic Youth, Kurt Vile)’s mixing techniques, engineering by Greg Calbi (David Bowie, Lou Reed) as well as a featured defining solo by Dinosaur Jr.’s J Mascis in their single for “Grey and Blue”. Based in Halifax, Peck emerged from a creative period of solitude after his band broke up, further building his musical knowledge and honing in his life’s choices towards greater clarity. Crafting sounds that are drenched in gritty reverb amidst stark and powerhouse chords, Kestrels’ ten tracks have been worth the wait since their last 2016 self-titled release. Dream or Don’t Dream is out today via Darla Records.

The resistance towards preconceived expectations is near palpable for many of us, yet often we find ourselves engaging in small talk without taking a moment to step back and question why we do so. Amsterdam-based artist Nana Adjoa encourages us to self-reflect and find that space of choice and contemplation we so often lose. “No Room” is her second single off her upcoming record, Big Dreaming Ants, honing back to carefully placed nostalgic memorabilia in her music video that highlights her Ghanaian heritage. Directed by Robbert Doelwijt Jr, “No Room” looks to be a scene right out of a beautifully detailed film. Complete with captions that assume fallen prospects, family members ask “How is university? Without a degree you won’t be taken seriously. Is it smart to come up with a Plan B?” as Adjoa croons There is no room, left to fantasize / I imagine my way out, of this cubicle life. As the track looms to a close, Adjoa rectifies the discordance she experiences as she wanders solo to the outskirts of her home in a mass of fields, nothing to interrupt her space except her lyrics and the strums of her guitar. You can pre-order Big Dreaming Ants here ahead of its September 24th release.

Song Premiere: “Stuck in a Loop” by Haneke Twins