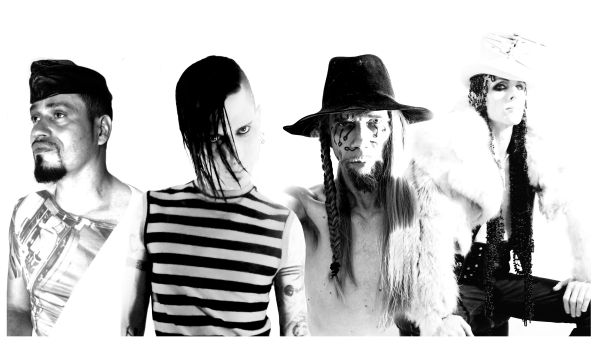 Famed industrial/gothic rock band Psychotica have reunited and reemerged with an evocative and emotive new 7”.

Psychotica started as a way to combat boredom within the New York music scene in the early '90s. The band's members were rehearsing for what would be their very first show at the club frontman Patrick Briggs managed, the Squeezebox at Don Hill's. Fatefully, an A&R person for American Records happened to be walking by, heard them, and had a record deal offer on the table immediately following their show.

By their second show, fashion icon Stephen Sprouse had statues fashioned of the members of Psychotica and placed them in the highly-acclaimed glam rock exhibit in the Rock'n'Roll Hall of Fame (take a trip to Cleveland, and there in the Amhet Ertegun Hall of Costumes, sandwiched next to David Bowie and Iggy Pop, you'll find "Patrick Briggs from Psychotica!" decked out in Saran Wrap and strung up on a neon cross.)

As the year unfolded, it was announced that Psychotica would be the opening act for Lollapalooza 1996 on a bill that featured Metallica, Rancid, The Ramones, Soundgarden, Devo, Rage Against the Machine, Tool, and The Godfather of Punk himself, Iggy Pop.

Now, after a triumphant return from their co-headlining gig at the Azkena Rock Festival in Spain, Psychotica are once again exploding out of the ashes of rock 'n' roll to show us how it’s done. After 26 years together, it’s still about their dedication to being leaders and not followers, mixed with their ever-evolving songwriting skills and legendary live shows.

Psychotica's new 7", All The Broken Souls, is due out on April 6th via NYC's Greenway Records, and the band will tour the West Coast this April.  See below for all upcoming live dates.

“All The Broken Souls” is a powerful, industrial-tinged rock opera anthem for the disenfranchised and discarded.  The defiant “Hope Will Never Be Silent” lights up with a funky dance music groove, acrobatic strings, and dynamic percussion. Both numbers blaze with Briggs’ plaintive exclamations and triumphant lyrics of struggle and survival against adversity.

Pre-order link for All The Broken Souls 7”: http://greenwayrecords.storenvy.com/products/23598282-psychotica-7