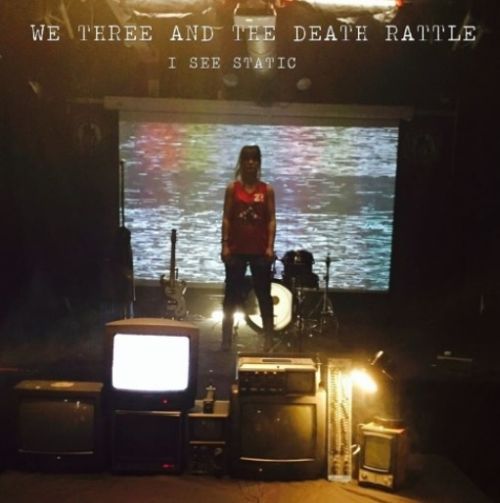 We Three And The Death Rattle - "I See Static"

After releasing a few singles in 2012 and 2013, WTATDR unveiled its self-titled debut album in February 2014 via PAW//PURR.  The band followed the full-length up with the striking singles “Stray Rounds” and “Black Lightning’s Daughters” and electrifying live performances that have taken WTATDR from its home base of Liecester to London and other UK cities, as well as the MaMa Festival in Paris, France.

Critical raves for WTATDR have been swift and glowing, from the buzz of indie blogs and distinguished outlets like The Guardian and Dazed & Confused to airplay and live sessions on prominent media stations BBC6 and XFM.   WTADR is currently wrapping up work on its second full-length, Entrances & Exits, and its lead single, “I See Static”, drops October 14th on PAW//PURR.

The relentless and dynamic “I See Static” gets its premiere right here and it sonically follows in the impressive footsteps of WTATDR’s previous singles.  The opening verse struts by with nervy verve as the emphatically smacked, staccato drum beat collides with distorted guitar notes that buzz like a neon sign on the fritz.  Cooper proclaims with richly bluesy dispassion the fitting phrase that life (and this song) is, “…never less than a rollercoaster.”  Lyrics-wise, “I See Static” takes the listener on a disquieting ride inside the mind of an individual who is questioning the core of his/her identity.

The lively chorus sections shift into an even higher gear, grinding with the momentum of an unstoppable steamroller flattening everything in its path.  Low-end guitar burn and keyboards drone continuously flow forward amid scintillating cymbals smash, an effervescent peppering of rapid-fire drum hits, and Cooper’s sharply declared warning that, “This is an oil slick of trouble…”  On the thundering and thrilling “I See Static”, WTATDR confronts the unsettled psyche with a vivid sonic and lyrical reflection upon the loss of an individual’s identity.