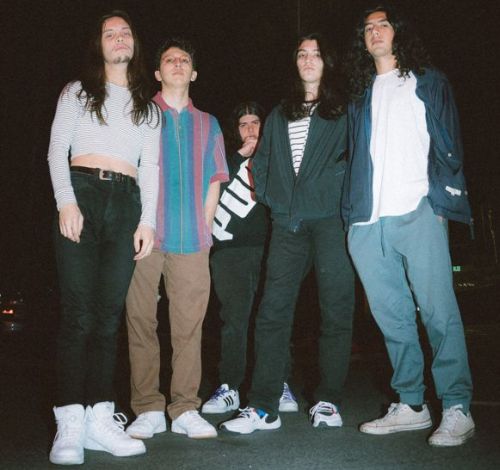 Just ahead of the July 26th drop of Los Angeles-based Beach Bum’s latest album, Years, Rebel Noise is stoked to host the premiere of “C.O.L.”, a killer cut off the LP.

The music hybrid band (punk, rock, hip-hop, more) go back to their raw and aggressive roots on “C.O.L.” which brazenly rages with a hot blend of old-school punk and metal. It’s a scorching one-shot that doesn’t sound like the rest of the Years, burning the ears with blazing metal riffs and defiantly exclaimed vocals.

But that’s what’s exciting about this West Coast collective that started out full of frustration and depression, yet over time mutated into something more expectant and exultant. Their music is never static, but something alive and evolving – and honest.

If the band’s members are into it and want to play it, they will, no matter what the genre. As vocalist, guitarist, and producer Jonathan Horsley (AKA Jawntang) puts it, “We started out as a punk band, but all of our fans were into so many different things, so we just started saying ‘fuck it’ and writing whatever we were into.”

Beach Bums have spent the past few years releasing a variety of tasty platters that range from hardcore punk to hip-hop, garage and surf rock, and metal. They released Everything in 2017, which, true to title, featured a smorgasbord of sounds.

Beach Bums focused on specific musical styles for their 2018 follow-ups; indie rock on I Want to Sleep Forever and hip-hop for The Goat (Pts. 1 & 2). Wild live shows and anecdotes abound. Community, collaboration, and genuine expression are key to the band. And you’d be hard-pressed to find something more expressive than “C.O.L.”!