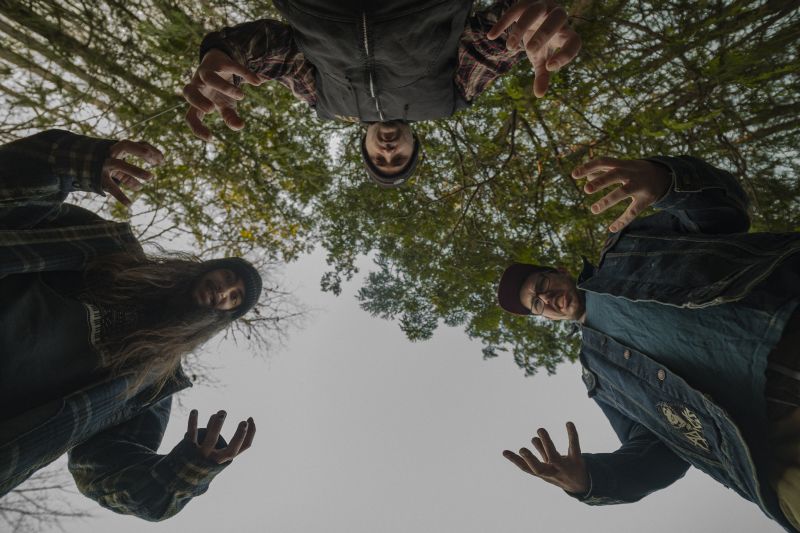 From out of Burlington, Vermont comes Lungbuster, an off-shoot act of the rock ‘n’ roll band Smokestack Lightning.

Lungbuster was formed in 2019 by Raf Soto and Adam Dean and now includes Edgar Vega as a member.

The group have dug into sludgy stoner rock with a bit of heavy psychedelia at times, and menacing doom metal vocals. The trio deliver blunt lyrics on angst, addiction, death – all fueled by the influence of weed.

Lungbuster were all set to go live as a band in April of last year, but of course the pandemic put an end, or at least a long delay to those plans.

Instead the members buckled down in the studio and online, creating their music DIY-style.

One of Lungbuster’s musical results is being officially unleashed today. Rebel Noise is stoked to host the premiere of the fiery and intense “Durban Poison.”

The track starts off with a measured, but foreboding guitar line and is soon joined by the emphatic cymbals tick and a ponderous drum beat.

The tension of the hulking number is palpable as growling and shrieking doom vocals invade the instrumentation and the blazing guitar jags shoot like lightning from the sky.

Unlike most doom/dark metal songs, the lyrics can be heard many times, including phrases like, “Watch me burn” that are then consumed by the screaming-phoenix psych-guitar line.

Soto gives some insight into creation of “Durban Poison,” commenting, "The recording session for this song was a dream come true for me. We recorded everything analog directly onto a Tascam reel-to-reel, which was something I had always wanted to do since I was a kid.”

“The song was half-written when we brought it into the studio. We improvised the rest and were happy with the result! I used a lighter for a guitar slide and it made some pretty cool noises. Recorded, mixed, and mastered by Ryan Cohen at Robot Dog Studio."

The band members also partook in a brief interview and go into their music below:

Heya guys! So, how much of a role does weed culture play into your music (from your band imagery to the name, releasing it on 4/20, etc…)?

It plays the biggest role. We want the listener to get a contact high from every aspect of the band.

When you set out to track something this expansive, what is the goal? Was this recorded all in one go, or are there any overdubs?

This was our first time recording a song this long in the studio. We basically had an idea for the vibe of the song when we brought it in and finished the rest there. The song was recorded in two takes, with the only overdubs being the vocals.

There seem to be two main changes musically in “Durban Poison”; right at the half-way part where the riff becomes more sludgy and doom-laden, and then about 3/4ths of the way in the guitar relaxes a bit. Did you write and perform the song as a set form or are sections jammed?

We have not thought that far ahead - haha. A lot of what we do is jamming; most of this music writes itself, really. We just get as stoned as humanly possible and let it out. The part where the change happens was another half-finished idea for a song. We didn't know what to end with originally, so Edgar suggested we try that riff and it somehow worked.

What can we expect from the band for the rest of this year? Any prospect of playing live?

Nothing live right now, but lots of music to release. Currently working on a split with our local friends in SACHEM, as well as our debut full length. Physical releases to come on cassette, lathe, and vinyl.