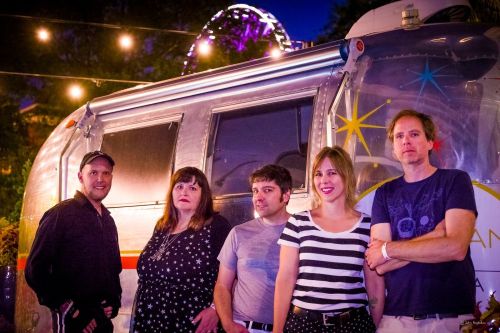 Seminal and vibrant Georgia-based alternative rock/post-punk band Pylon influenced the American indie underground, starting from its college rock roots as part of the Athens music scene in the early 1980s.

Led by the renowned, pioneering, and powerful singer-songwriter Vanessa Briscoe Hay, Pylon made its way to the national level along with other Georgia-formed acts like R.E.M. and The B-52s. The members of Pylon eventually called it a day in 2009, but they were name-checked and covered by other bands inspired by their sound.

Hay came back in 2014 with what she thought would be a short-lived iteration of Pylon, which was named Pylon Reenactment Society. The intent was to perform a single show at an Art Rocks Athens event. PRS, however, eventually wound up continuing as a band, using Pylon as a springboard to shape new ideas and sounds.

Rebel Noise is highly excited to host the premiere of the song “Messenger”, a mid-tempo socio-politically relevant reflection on love, war, and modern communication, one of which is in short supply these days…

Pre-order the single (available as a clear, blue and black 7” single and download) here: https://chunklet.bandcamp.com/album/messenger-b-w-cliff-notes

12/6 Sacramento, CA at The Red Museum