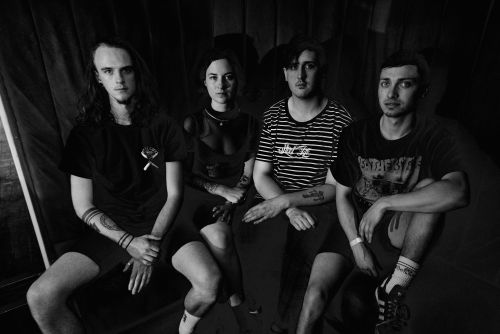 Sheffield, England’s Havelocke is kicking up a sonic storm ahead of the band’s This Is Havelocke EP release on August 2nd via U.K. label Just Exist Records.

“Shudder’s lyrics [however] are oddly bittersweet,” says vocalist and guitarist Owen Cousins. “It’s about feeling like everything is going okay for once but feeling lost in that feeling, not really wanting to believe it and not knowing what to do with it.”

The members of Havelocke (Cousins on vocals and guitar, Hope Thackray on guitar and backing vocals, Jack Taylor on drums, and Jacob Clark on bass and backing vocals) are all into the emo, punk, and hardcore genres and that shines through on their incendiary tunes, including “Shudder.”

To celebrate the EP’s release, Havelocke have lined up a show/party at The Church Temple of Fun venue in their hometown on July 26th.