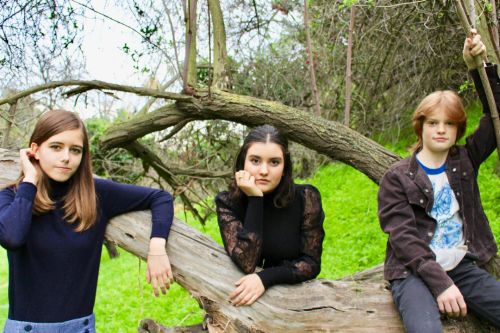 Los Angeles-located indie rock/pop group Frieda’s Roses may be a newer band on the scene with young members, but their voice needs to be heard as they tackle serious subject matter on their songs and exude a mature attitude.

The pandemic has put a dent in the plans of a lot of bands, but the trio continue to create. They’re in the middle of recording their second album, which they hope to release this summer.

Ahead of that time, Rebel Noise is stoked to host the premiere of the music video for “Capable,” a prime cut off of Jessica Triangle.

The video clip crafted by Fannin is lyrics-centered in nature, which is all the best to drive hope its relevant social messages - of calling out the bullies and abusers, and of being a better person than those who mistreat others.

In the inventive black ‘n’ white filmed video, the song’s powerful lyrics are hand-drawn on various objects, from note paper to vinyl spinning on a record player, and even on a deck of cards and behind a painting on the wall.