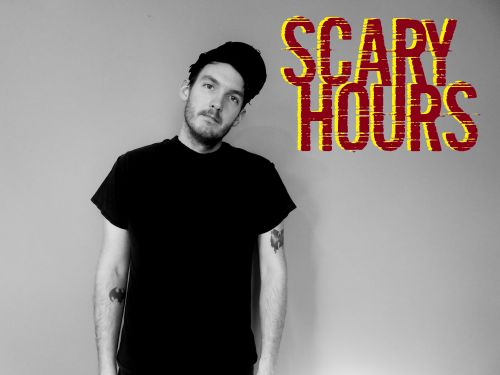 North Jersey musician Ryan Struck, as Scary Hours, returns to his punk roots on an explosive and socio-economically relevant track and video.

Hailing from Northern New Jersey, singer-songwriter and multi-instrumentalist Ryan Struck started out playing in various punk and hardcore bands in his teens and 20s.

Struck branched out into other genres over time, crafting compelling tracks that combined elements of emo, pop, and folk, and that were shot through with his hard-hitting lyrics and attitude.

The moniker Scary Hours encompassed this multitude of Struck’s musical expressions, as well as being acoustic-based and including guest musicians at times. At the core of the stylistically morphing project, however, Struck continued to burn with hardcore punk fury.

New Jersey label Pyrrhic Victory Recordings added Scary Hours to their roster and debut album Live to Serve was released in 2018 to much acclaim, including praise from Ghettoblaster Magazine, The Vinyl District, and Big Takeover.

This stressful and unsettling year sees Struck returning full-force to his punk and hardcore roots. He unleashed the all-too-relevant, “incendiary and socio-politically on-target “Bullet Fairy,” which rails against unchecked police brutality, especially against minorities” (Big Takeover premiere) in May.

And now Struck strikes with a vengeance again on the explosive and timely “Cost of Living,” which takes Karl Marx’s theory of capitalist alienation and applies it to the socio-economic outlook of today’s world.

Rebel Noise is stoked to host the premiere of the ingenious and blistering music video for the blasting “Cost of Living,” which superimposes Struck (in silhouette and in an intensely raging performance) upon brief clips of found footage TV ads and news programs.

Each vivid image, from medications and cash to a slaughterhouse and the American flag, is carefully placed to enhance the song’s trenchant meaning (of being stuck and ground up in the capitalist-driven machine) and Struck’s justifiably scathing emotions.

Struck reveals some details about the song and video, stating, “I got the idea for this song from seeing ads for antidepressant medication which panders to gender roles: women baking cookies or shopping with their kids, looking disconnected; a man in an office meeting with a cloud over his head.”

“When capitalist alienation interferes with your ability to work the machine and fulfill your role, you become a commodity for the pharmaceutical industry among other industries.  Your unwillingness to comply will leave you economically and socially marginalized.  Your servitude will strip you of your identity as you solely exist to produce.”

“Either way, your future's been foreclosed and if you're sad about it, corporate gaslighting will turn a profit from you and keep you quiet while you march to the slaughter with everyone else.  Marx was right.”

Several more singles are set for release this year and a new full-length from Struck, as Scary Hours, is anticipated for early next year.