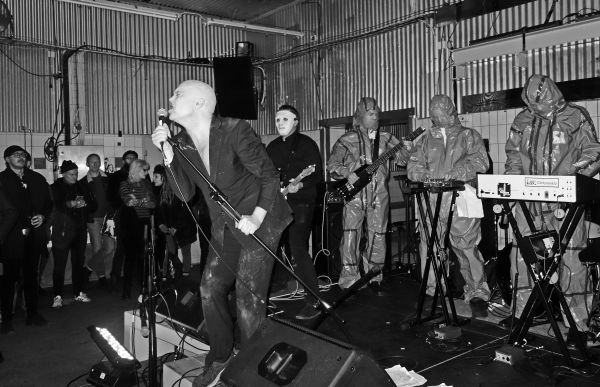 Avant-garde noise-mongers Isotope Soap, founded and led by Peter Swedenhammar, recently released a compilation album titled Monitored by Zu Tse, comprised of previous 7” records and a mini-LP, via American label Emotional Response Records. It’s the first time the 17 tracks are available internationally and the comp can be purchased at Emotional Response’s Bandcamp:

Swedenhammar is a punk-for-life musician who’s been in various band since the early ‘80s, most notably as part of PUSRAD. He also runs the KBD punk website, a remarkable source of DIY underground punk from around the world. Check it out here: http://www.kbdrecords.com/

Described as “demented synth skronk” with “paranoid visions” and “inverted futurism” (Huh?), Isotope Soap exists in another musical world far from the mainstream mush that that occupies the airwaves today. They create music to hear and feel something unusual.

Per the lyrics, the “universe is such a f*cking waste”, but Isotope Soap’s “Reversed Big Bang” make for an exhilarating race to the end. That it’s done DIY-style with a video featuring Swedenhammer jabbering his lyrics upside down as a flesh-puppet with drawn-on eyes and nose makes it all the more deranged, yet relatable, since we live in a world that has actually been socio-politically turned on its head by those who are ignorant and irrational (whether in the halls of power or in the general public). Maybe it’s time to “blow it all to bits.” and let the other lifeforms in space take over the Earth and the rest of the universe…