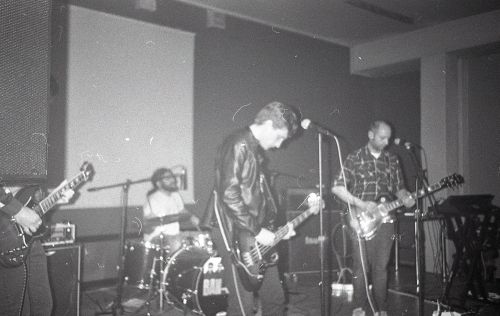 Teramo, Italy’s Inutili are one of those band where being tagged ‘unique’ is a good thing. Decidedly experimental in their approach and sounds (and visuals), their music is exciting and bold.

Inutili’s sixth album, New Sex Society, is set to unfold on September 20th via New Jersey’s Aagoo Records. The progressive record will be available digitally, as a 7-track CD, and as a vinyl LP with only the first three numbers from the CD on it.

Rebel Noise is psyched to host the premiere of the wild video for the over-8-minute single “Space Time Bubble”. The song itself is immersed in noisy rock guitar scramble, rapid drum beats, and freely bashed cymbals.

Vocals teeter on the edge of madness, winding around the guitar dissonance and cathartically blasted out amid the relentlessly punchy drum beat. At times a squelchy psych guitar line rises amid the sonic collision.

The song slows down sporadically into a hazy groove, but is still pushed along by the insistent drumming. Near the 6-minute mark, the track intensifies into a rhythmic noise rocker, with searing guitar jags and an even more kinetic drum beat.

The (probably) NSFW video itself gets its vivid kicks with various clips of same-sex couples making out (Yep, lots ‘o tongues are wagging!) amid a peppering of mini-boxes that show different colorful and psychedelic designs and images.

Most will be turned on, some turned off, some tuned in - and some will drop out. After all, this unique band is not for everyone, but it is for those who are adventurous and open-minded in their musical (and visual) tastes.

The band explains the meaning behind “Space Time Bubble”, stating, “The song is about romantic relationships, about important ones, about those that leave indelible consequences. Sometimes you meet the person again, and you unconsciously feel a sensation, like a space time bubble in fact… The song briefly summarizes the memory of things that did not go well and that led to the break-up…”

About the video, the band comment, “The music video was born from an idea by Danilo of the band. The concept of a temporal space bubble as a set of images that crowd the mind - This was the first inspiration, and for this reason there are many images that move quickly. Some of these had already been used in live sets as projections. They were elaborated by Pierluigi Filipponi, who occasionally plays in the band.”

“While working on the video, there was the will to communicate something important in a period in which (in Italy in particular), we are absurdly living with discrimination, a period in which politics like society is suffering a racist drift.”

“We thought it would be important to do something in our own small way. This is also why we have tried to show how natural relationships are, regardless of gender. It is incredible to think of how it is difficult to see two men or two women kissing or exchange affection. Obviously, because the surroundings are still incredibly hostile. To put all this together, the work, the professional skills, the commitment, the patience, and the love of Angelo di Nicola were also necessary.”