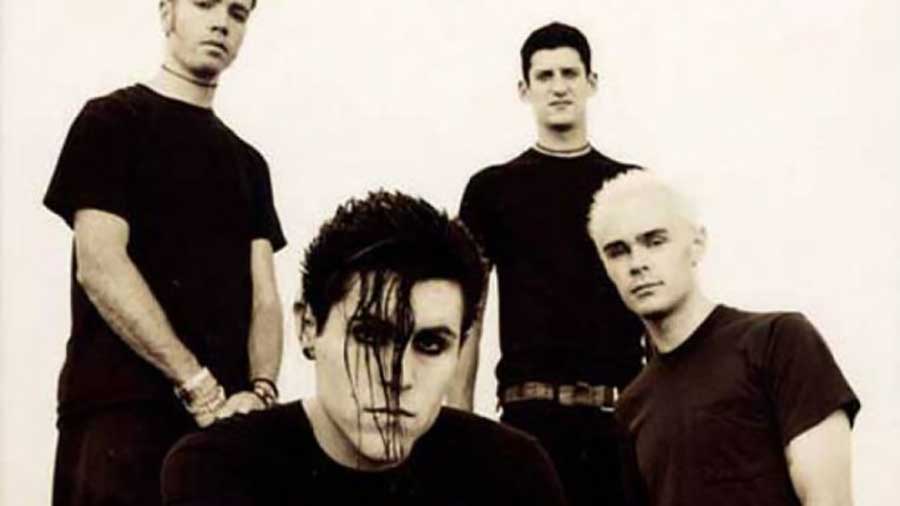 Catching up with Davey Havok of AFI

The world belongs to Davey Havok and AFI. Since the release of THE ART OF DROWNING last fall, Havok and AFI have performed on concert stages all across North America, Europe, and even Asia. And after hundreds of shows and thousands of miles, AFI will wind down an extraordinary year on the road with two headlining appearances at the already sold-out Palace in Hollywood. Havok recently called DESTROY ALL to talk about AFI’s non-stop 2001 tour schedule and the future of Berkeley, California’s favorite goth-punk band.

“We started touring in early October, 2000, right after the record came out,” Havok told me, his voice sounding very energetic and upbeat. “First we toured across the United States and into Canada with Rancid and the Distillers. That tour covered the East Coast and the West Coast, and then we headlined a little Southern tour with just the Distillers, who opened for us. After that we went to Europe and supported the Offspring on their European headlining tour. On that tour, we played in front of some of the biggest crowds I had ever seen in my life. Playing in front of that many people was very surreal. And then we came back from Europe and immediately went on a Canadian tour, even though it was the middle of winter. We headlined a festival tour called SnoJam and traveled across Canada. It was freezing. After we finished SnoJam, we did a US headlining tour where we played a series of dates in small, strange cities like Springfield, Illinois, Lincoln, Nebraska, and Billings, Montana. We started out on the East Coast and toured our way back home. Then after we arrived home from that tour, we flew to the UK to do a UK headlining tour. And then after the UK tour, we came back home and did the entire Warped Tour. We’ve been home from the Warped Tour now for almost three weeks, and in two days we’re leaving to do a Japanese tour with Sick of It All. And then two days after we arrive home from that tour, we will begin one last headlining tour across the United States to finish promoting THE ART OF DROWNING. I don’t know exactly how many shows we will have played when we’re all done. But it’s in the hundreds.

“So far the extent of our stage production has been a smoke machine, a few lights, and some light-up jack-o-lanterns. We’ve used a minimal stage set only because we haven’t had the time or the budget to put together anything more exciting. It’s not like that for any ethical punk rock reasons. If we could have flames shoot out from the stage, we probably would. However, on our upcoming headlining tour we have a few new stage ideas planned. I don’t want to say specifically what there are because I want them to be a surprise. And I also don’t want to say what they are just in case we can’t get our shit together in time. Our next stage production won’t be too extravagant, but it’s going to be a little more than just light-up jack-o-lanterns.

“We never knew what was going on with our set time at the Warped Tour. We played first in New York City and last in Tampa, Florida. Sometimes we would play really, really early and sometimes we would play really, really late. I find it most painful to the play the early hours just because I know I can give a stronger performance closer to the nighttime. Some of our best shows on the Warped Tour occurred at dusk or even after dark. The night is our most comfortable environment, away from the sun and the middle of the day. The Warped Tour’s Ventura Fairgrounds show was nice for us because we got to play last. That was one of the few times anyone could say the Warped Tour was freezing. But we were very comfortable onstage because we move around a lot. When it’s not 103 degrees outside, it makes playing a lot easier.

“On this past Warped Tour, we toured in a tour bus for the first time. It was awesome. Usually we tour in a van with a trailer and [drummer] Adam [Carson] and [guitarist] Jade [Puget] do a lot of the driving. One time, I walked into the hotel lounge and found our bus driver sitting there while our tour bus was leaving without us. Adam decided that he wanted to drive… Another time, our bus driver pulled two guys out of a burning big rig that had fallen off the road in the middle of the night. It was crazy. Talk about heroics on the Warped Tour…

“Rancid and the Offspring have always helped us and looked out for us, and we try to do the same things for other bands. That’s just the scene we came from and the environment we grew up in. Bands from other scenes seem to be really competitive, where if your band has more than another band has, you feel better about your band. That weird sense of jealousy seems really selfish to us, and we’ve never been like that. In our scene, we all felt like we were the outcasts and that we had to look out for each other.

“Signing with a major label is not something we’re politically against. It’s just something we haven’t really thought about because we’ve been so busy with the tours. But no matter what label we’re on, we want to continue to grow and have as many people as possible hear our music. Our music is all we have, we put our whole hearts into it, and we really have nothing else. “We’ll finish our last headlining tour with three Halloween shows in San Francisco. After that, we’re going to focus on writing a new record for [our current label] Nitro, and hopefully we’ll be in the studio by the beginning of next year.”

This article first appeared in DESTROY ALL MONTHLY. Please check out www.destroyallmusic.com. Thanks, Charlie!