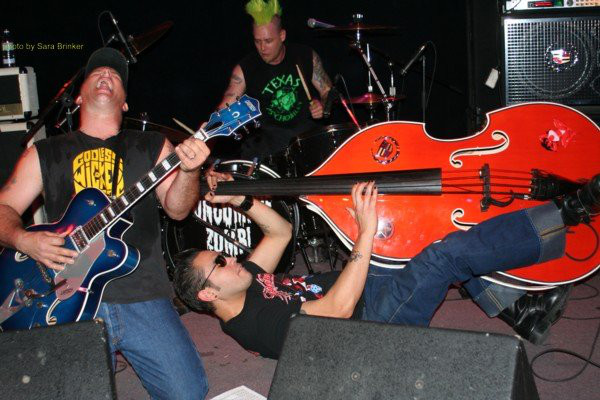 Catching up with Destin Pledger, drummer of Concombre Zombi and founder of Graverockers Union Wreckords about all things "Psycho".

Q) First tell us a little bit about yourself, how you came into the scene and all about you and your music taste like playlists, your age, work and so on…
A) Hi, my name is Destin and I have started the USA’s first all-Psychobilly “label” called Graverockers Union Wreckords local 666.  I’m a 31 year old waiter and have been playing in gig bands on and off since 1990, bands ranging in styles from Rustic Stomp, Neo Rockabilly and Psychobilly.  I am currently playing in a band called Concombre Zombi with Mark Canepa (ex: Hayride to Hell).  We are putting together some fairly heavy Psycho songs.  Which is what I mostly listen to as well.  My favourite bands are numerous.  I rarely venture far from listening to Psychobilly bands, there are so many sub-genres in Psychobilly that it makes it possible to listen to bands with different sounds and styles for different moods that I may be in.  Sometimes I like poppy stuff like the Peacocks, Tiger Army, Apple Thieves, etc.  and other times I like some Neo style rockabilly, bands like Stingers, Lota Red and Nine Lives.  But I am mainly in the mood for newer Japanese bands like Seven steps To Hell (STH), Guilty Skulls, Battle of Ninjamanz, Spiderz, Trioxin 543, Great Invaders, Cannon Shots, and so on, and so on.  No real favourite tracks or band.  I’m just in to Psychobilly all together.

Q) When did you start this Project?
A) I’ve been thinking about it for a few years, but I finally started things up around February of this year 2002.

Q) Which bands are on your site right now and how have you met them and got in contact with them?
A) I’m doing projects with several bands right now and have some more in the near future.  So far we have confirmed interest for releases with Toxocaras, The Pagan Dead, 12 Step Rebels, Graveyard Shift, Bad Reputation, The Lost Boys, Big Black Cat, Spoilers, Lonesome Kings, Tabaltix, Coffin Draggers, Concombre Zombi (of course) and Slapchops.  With the bands being from all parts of the world I haven’t had the opportunity to meet everyone.  I did meet members of Tabaltix, The Pagan Dead and Graveyard Shift at the Wrecker’s Ball on the West Coast this year.  Other than that all contacts have been over the internet, through the mail or phone.

Q) Do you think it’s possible to work together to create a site like you have over here like a underproject from yours?
A) I think that is very possible.  I have created this to work as a “union”.  Which means anyone is invited and everyone is involved on some level, bands, zines, artists, printers, promoters, everyone helps out as much as they can.  That’s really what the USA was built on, unions and organizations coming together with a common knowledge or goal inorder to get things done, ours just happens to be Psychobilly.  This is a completely DIY organization and would actually appreciate the help from willing persons overseas to combine resources.

Q) Tell us about the new Releases and Tours which are coming up soon…
A) The first release has been in promo version for a couple of months now, but the actual release will be in my hands on Monday of next week.  It features two bands, Toxocaras and The Pagan Dead.  The second release will be another two band split with 12 Step Rebels and Graveyard Shift.  Third we have two bands that use e-bass (electric bass) the correct way, Lonesome Kings and Spoilers.  That’s all I’m working on right now, but I do have finished recordings of a couple of other bands in my hands now.  But I will have to wait on those, I don’t make that much money at work.  As far as tours go, that will have to wait as well.  I have kicked around the idea a bit though.  Take out 4 or 5 bands on a tour of the States, good promotion.  Bring some Psychobilly to places that rarely, if ever, get a chance to hear the music live.  Sounds fun, but very time consuming, to much for me at this point.

Q) You’ve some MP3´s on your site too tell us which bands are on it…
A) Yeah there are a couple of songs up on the site by the two bands on the first release, Toxocaras and The Pagan Dead.  There will be more added as we go, mainly in accompaniment with each release.

Q) Are you working on your project just by yourself? Or do you have other hands helping you out too? If yes tell us about them too…
A) Like I mentioned earlier, this is a “union” first and foremost, so I get help from all over.  Most of the help has come from Chad (12 Step Rebels) and his friend Noah with the donation and construction of the Graverockers Union website.  Those guys have gone way out from the call of duty.  If it wasn’t for them this would not have come together as organized so quickly.  Also big help from Mike Adair and Mike D (True Blue Tattoos) for the bat logo design.

Q) What do you think about the European Psychobilly Scene over here and have you ever been to Europe or do you have seen bands from over here?
A) I love Euro bands.  Mad Sin, GWC (r.i.p.), Nekromantix (Kim, are you done with my bass), Gravestompers, Chibuku, Cenobites, MWM, etc.  I have not been to festivals or shows in Europe YET.  Soon though.  Hopefully Concombre Zombi can get over and play a festival and some tour shows.  I can knock out two birds with one stone by playing some gigs and promoting Graverockers Union Wreckords at the same time.  I’ve seen most everything that has come to the States, which includes many Euro bands, too many to name over the years.

Q) Any last words from you?
A) I just want people to know that this is an open organization and anyone can be a part of it.  My goal is simple, I want to further the development of Psychobilly in the USA and keep the genre alive for as long as possible.  And to do everything I can to keep this music out of reach of the wrong hands and to prolong any corruption that may have eaten up other Psychobilly scenes throughout the history of the genre.  All proceeds go back in to the Union to fund more products to choose from and to find better ways to obtain our products.  By the way, we need distribution ideas to record stores in Europe.  In the USA this is a new Psychobilly era that needs new, fresh Psychobilly bands and Graverockers Union is the base camp for this movement determined only to release new Psycho sounds.  Keep an open mind and progress the sound but try and keep things PURE at the same time. 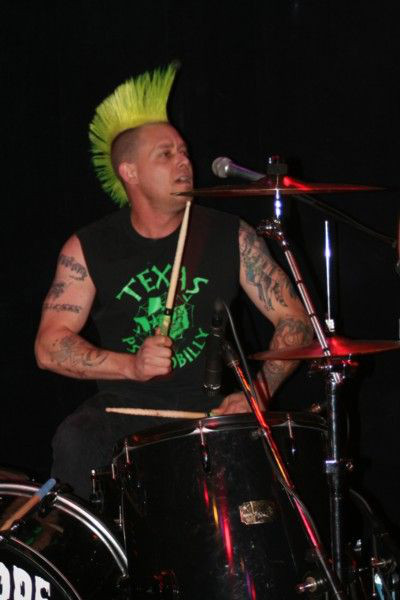 Just Wanting To Fit In: An Interview with ‘Your Enemies Friends’