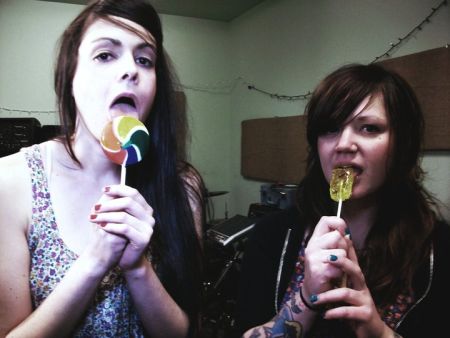 Hiya Zola and Chloe!  I’ve been spinning your Golden Haze EP recently and I’m curious about your lyrics “Are we blessed? / Are we cursed?” from “Golden Haze 2”.  How’s it going for you now?  Much more blessed than cursed, I hope!
Things are going well. We have one more recording session in a week or so, then we will be done, and there are some cool shows on the horizon. So yeah more blessed then cursed at the moment. The lyric is just kind of about how confusing life events can be and how it is sometimes about perspective. Events that seem cataclysmic at the time, end up allowing for better things to happen in the future. Things that are seemingly good, spoil or become burdensome after they lose their appeal. You know, the usual.

Where are you based these days?
Right now we both live in Berkeley, California and practice in Oakland. We are actually living down the street from each other.

From what I’ve read, Chloe was in a previous band called Stiletta.  What was that experience like?  What techniques or thoughts have carried over from that band to Bam! Bam!?
Chloe learned to play drums with Stiletta and like with anyone's first band, it is kind of about figuring out how you fit in to this other music world. We worked with Mila from Stiletta for our video for “Golden Haze 2” recently, which was fun; she is a very talented individual.

There’s been much excitement over Calvin Johnson as guest vocalist on the excellent “Medicine”.  How did you snag him?  Are you kindred spirits in attitude and/or sonics?
Calvin is a super nice, super accessible dude. We have opened for him a few times once at a comic book store, and once at a used book store. He often plays places that aren't traditional music venues, with no stage and  no amplification, making the artists super approachable. The song was written with Calvin's back-ups in mind. His voice is so bombastic it is almost like more of an instrument. But yeah, we asked him if he could do it and he said yes. It all happened pretty organically.  Calvin is kindred spirit for sure and also a hero.

Going into the lyrics of “Medicine”, which include the line “I’ve found something much better than love”, are you referring to some type of addiction or obsession?  I’m really digging the way your lyrics lead to deeper thought about what is “better than love”…
It is kind of more about the ailments than it is about the cure. I was watching an antidepressant commercial, and there was this girl who was heartbroken and the pill that they were offering seemed to advertised a remedy for a broken heart.  It was kind of fucked up. I only saw the commercial once, so other people probably thought it was fucked up too and pulled it. I still am not sure what is better than love.

You played live with a lot of K Records bands.  What’s the connection to that label or the bands?
It is ridiculous how difficult it is for touring bands to book shows in Oakland, so we try to help out. Calvin has always been really cool about connecting bands. Through him we have met some really cool people, like the kids from Laser Zeppelin, The Memories, The Stickers and so many more. Zola is also kind of obsessed with Olympia, and Athens (where HHBTM is located); they are both these cool, indie rock Shangri-La kind of cities.

Back to “Golden Haze 2”, first off, is there a “Golden Haze 1”?!  Secondly, and more importantly, you do some speedy sing-talking on the verses.  How difficult or fun is it to pull that off?

Haha. We used the second take of the song for our first demo and the name kind of stuck; it is kind of a not funny inside joke between the two of us. Maybe eventually we will write a prequel?  Who knows? It is more fun than difficult, but a little bit of both. It is probably more difficult for Chloe than Zola.

You’ve got a video up now for “Golden Haze 2” and it really fits with the alternating manic and slow-drugged vibe of your song.  Is most of it found footage or is it “fun” times (complete with cops) with your friends?
Mila shot the video when she was a teenager, then her and her partner at Public Notice, Dougal, edited it. We kind of gave them carte blanche to do whatever they wanted and we are pretty happy with the results. It is kind of funny just how much the cop in the video actually looks like a pig.

Many times your vocals are charged with distortion.  How do you accomplish this in the recording process?  Are you singing into a really messed up mic or…?
It was more of a radio distortion effect that we used in post production. We were trying to recreate the vocals that we got when we played at this Oakland punk warehouse called Sugar Mountain. That glorious distortion was the result of one of the craziest speakers I have ever seen. It was long and tall and had like ten six-inch speakers and was connected to a power source at The Ghost Town Gallery next door by like eight extension cords. All these elements created the perfect storm for vocal distortion.

Do you have any other releases out besides the Golden Haze EP?  Is there an album in the works, perhaps?
We self-released our first seven inch Let it Go and I think there are still copies available through the HHBTM website. We don't have a release day for the album yet, but we are working on it.

“Out the Window” gets menacing with the spiky lyrics “If they come to find me / I won’t go easy / I’ll go out the window.”  Who’s coming to get you?
Anxiety.

You have a thing for candy.  What are your fave kinds?  Mine at the moment are Cadbury Crunchie (I love that honeycomb!), Nestle Aero and Lion, and Mars Malteesers.  Yes, I’m on a British candy bar kick!
There are these Reeds Ginger Chews that are addictive. The peanut butter ginseng ones are my favorite. I know it sounds like hippie candy, but trust me.