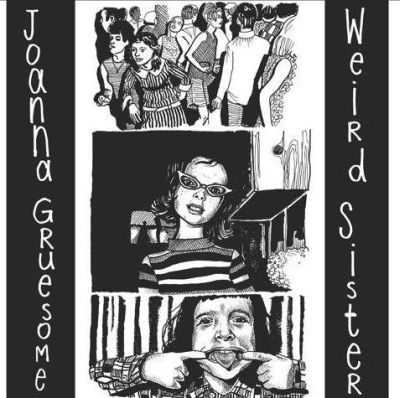 Owen and Nicholls take time out from their busy schedules to chat about the band’s sound and all the extracurricular activities they’re juggling.

Hello everyone!  Just to make sure I've got this straight, that would be Lan, Owen, Jake, Max, and... Dave, I hope?  I guess not all things can be found online, or else I'm not good with the search function...  Your cool debut album Weird Sister is out now on Fortuna Pop! in the U.K. and on Slumberland in the U.S.  How has life, or I should say, the press and the public been treating you?

Owen: Haha - 4/5- We have a (George) Nicholls rather than a Jake. But I think that might be referencing Jake May, who is our spirit guide in a number of ways. And yeah, press and public have been nice, mainly just angered by our name or whatever.

Nicholls: Surprisingly good actually, haven't had anyone hating on us particularly awfully.

You performed at not one, but two Album Launch parties for Weird Sister; one in your native Cardiff and one in London.  What were the shows like?  What kind of mischief did you all get into?

Owen: We had to cancel the Cardiff show sadly as Lan didn't recover from her appendicitis properly (is fine now).  But London was super fun and Trust Fund played and Playlounge played.

Nicholls: I broke a nail and my knob fell off.

I'm a sucker for your sweet male 'n' female harmonies, but you're not afraid to devolve into ear-squinching (Is that a word?) guitar feedback and distortion.  What guitars and/or settings do you use to create this noisy frisson?

Owen: I use a Jaguar and a big muff and a loud amp.

Nicholls: I use either a Les Paul or this cheap Strat copy I bought for about £20 years ago. I tend to just play lots of riffy/jangly melodies and let them feed back as much as I can. Settings-wise I mostly have the gain about half way, a little treble, and reverb about 3/4.

I enjoy how you balance a fast-paced, punk tempo with airy, unruffled vocals, like on "Lemonade Grrrl".  Is this song about the Riot Grrrl style/movement/outlook, as, from what I've read, Lan was reared on (along with punk tunes)?

Owen: It's not about Riot Grrrl, but obv the 'Grrrl' is a little reference. Riot Grrrl definitely influences us musically and ethically, etc… but I don't think I'm particularly eloquent enough on the subject to write a song about it. The lyrics are kind of a collage of different lines or thoughts or references I suppose.

You also have a 7" out on HHBTM Records based in Athens, Georgia.  Are the 2 songs on the 7" also on Weird Sister?  If so, why did you pull those songs for a 7" instead of others in your catalog?

Owen: Yup, both those songs are on the album too. We recorded the 7" way before doing an album was even an idea, I guess we just thought they'd fit on a larger record and tbh I don't write a huge amount of songs very quickly so it might just have been out of necessity.

A lot of your songs escalate to a break-neck pace.  Does this take a toll on the drummer?  Sorry, not sure who’s on drums…

Owen: Haha, yeah probably does. Dave's on drums (I play guitar and sing) and he seems kinda sweaty when we've finished playin but I guess he seems to keep up.  Or set the pace entirely, I dunno. Dave's into a lot of metal and hardcore, etc… and has been hitting drums for years, so it's probably a breeze for him.

Lan not only has Joanna Gruesome going on, but she’s also in Ides, and Owen, you're also playing drums in King Of Cats.  How do you keep it all in line and have the time to do all this?

Owen: I think me and Lan just spend a lot of time being pretty busy while also getting mega-stressed about the crazy amount of stuff we commit to. But yeah, I think if you like playing in bands or writing or whatever you just make time to do it naturally. A lot of it just amounts to sending tons of emails back and forth and turning up to shows.

Owen, you seem to be the king of doing everything, as you also have a publishing company called SpaceJunkie Press.  From what I've read, you've release a comic book.  What is it about and who did the illustrations?

Owen: Yeaaaaa, so Space Junkie (spacejunkiepress.tumblr.com) is a comic book press that I run with Sion from the band Saturday's Kids. We released our first comic, The Gutter #1, recently which was kind of a compilation of different strips from different artists we like/are friends with. We've just announced a great new comic called 'try something new today like grapes' by Rose Robbins, so check dat out.

Speaking of illustrations, who did the album cover art for Weird Sister and a lot of your fliers?

Owen: That was Andy Hart (A Fog Of Ideas), who has been consistently great to us.

Oh, and Max is running the record company Reeks Of Effort, is he not?  How's that going?

Owen: I don't know where Max is, BUT I know that Reeks Of Effort is going really well right now. They've released some of my favourite records of the year in the form of the Trust Fund and the Beta Blocker & The Body Clock EPs, started a cool split series called Sick of Hits, and are always putting on great d.i.y shows.

So, I guess Nicholls and Dave are the slackers, huh?  Just joking!  But just in case, are you into any extracurricular stuff besides Joanna Gruesome?

Owen: Dave plays in Saturday's Kids and is an art student in London. He also seems to be gathering an impressive collection of Grateful Dead baseball caps.

Nicholls: I help out here and there with Reeks of Effort with Max. Errrr, oh and Physics.

You've been playing a ton of gigs for a while now, you're on tour now with Trust Fund, and in December you'll be running around with Los Campesinos!  What are the highlights for you all?  I've not sure where you've toured in the world.  Have you gotten to the U.S. yet?

Owen: We haven't toured outside of the U.K. before, but yeah, we're going to NYC next month for CMJ which should rule and should involve us doing stupid tourist shit/searching for frat parties to see what they're actually like.

Nicholls: We're off to the states for CMJ and I'm so so, so excited, never been before. 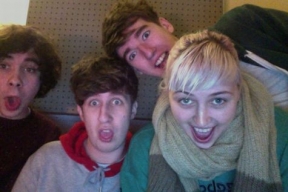 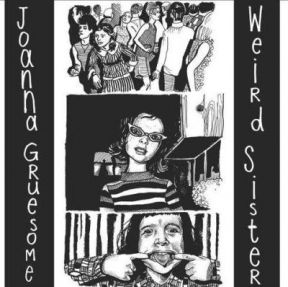