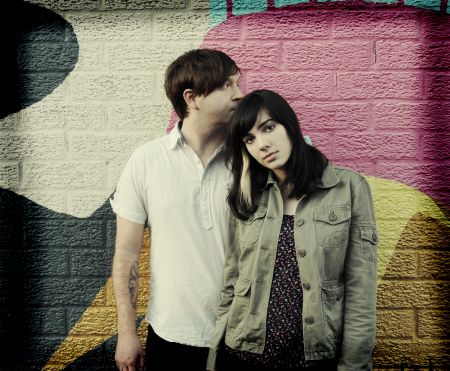 Hi Andrew!  How are you doing?  Just so everyone is on the same page, who is currently in Field Mouse and what do you play?
Rachel is the singer and rhythm guitarist, Andrew is the lead guitarist, Geoff plays drums, and Saysha plays bass, which is a lot like a guitar but about an octave lower and more often than not only has 4 strings.

When I heard your single “How Do You Know?” and saw the band name Field Mouse, it struck a chord in me that I had heard of you before – and the association wasn’t just because I tried to save various dying field mice in my youth (That’s what happens when you live near a field!).  Long question short, how did Field Mouse come together as a full-fledged band?
I met Rachel at college and we just kind of musically clicked. We don't really think about our band name ever or any band names, really. I probably never would have listened to Smashing Pumpkins if I did. We just kind of recorded the songs we wrote and one day we were a real band - there wasn't a totally defined point at which it became a band. It's like Jupiter in that the outer layers are gas and then there are some middle layers that are liquid, but it's all the same materials as the gas, but the pressure of all the gas above it turns it into its liquid state, but it's so gradual that you wouldn't notice the change if you were falling into Jupiter, you would just eventually realize you were in liquid. Then of course you would eventually hit the metal core of Jupiter and then you could hang out for realsies.

You’re making a go of it as a 4-piece now, with a single and two 7”s under your collective belt.  What’s the status of the creation of your debut album?  If listeners adore “How Do You Know?”, will they be swooning through the length of the whole upcoming album, or will it be mixing it up with various sounds/styles?
Album recording is well underway. We have the drums recorded and will have the rest done by the end of the fall. We are also using Kickstarter to help fund the rest of recording. You can treat it like a super advance pre-order and get the record for 10 bucks. People who like “How Do You Know” will probably be pretty happy with it.

Why did you choose to cover Julee Cruise’s delicately haunting “Falling” on your recent 7”?  Do you plan on covering any more songs?
A blog asked us to cover a pop culture song and write about why we liked it so much. We did and it turned out pretty well and so we decided to use it for ourselves, too. At the time Rachel and I had independently both watched Twin Peaks all the way through (a yearly pilgrimage that has since been replaced by The Sopranos for Rachel and doubling up on Futurama for me) and so it felt like a light-hearted, fun thing to do. I always wanted to hear the song with a full drum kit. We have no more plans to record covers. Perhaps after the album is done. It would be a little strange to have only 5-6 songs released and have 2 of them be covers.

Speaking of “Falling”, which was the Twin Peaks theme song, does the atmosphere of any films or TV shows influence your sound?  I think Zooey Deschanel’s The New Girl should include a heartbreak/break-up montage backed by “Glass”.
The short answer is no. I do love film scoring, though, but that's totally separate.

You’ve been playing a lot of gigs, headlining The Mercury Lounge and The Bowery Electric.  What has the fan response been like and is it a different energy to be playing as a band as opposed to being solo or a duo?
Well, we have never really played solo or as a duo, we have been a three or four piece live since day one. Rachel used to play solo before the band. It was acoustic or electric, but solo and quieter.

You played CMJ in 2012 as part of the Lefse Showcase.  What was that experience like?  Did you have the chance to listen to other Lefse bands like Teen Daze?
That was an great experience. Teen Daze was amazing, as was everyone else on that bill. Psychic Twin and Mister Lies closed out the night and were also fantastic. I think the highlight at the time for us was Levek. But really that whole show was amazing and we were lucky to be a part of it. 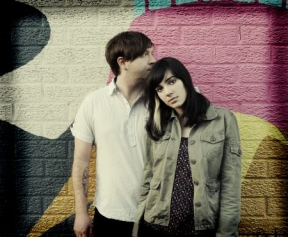