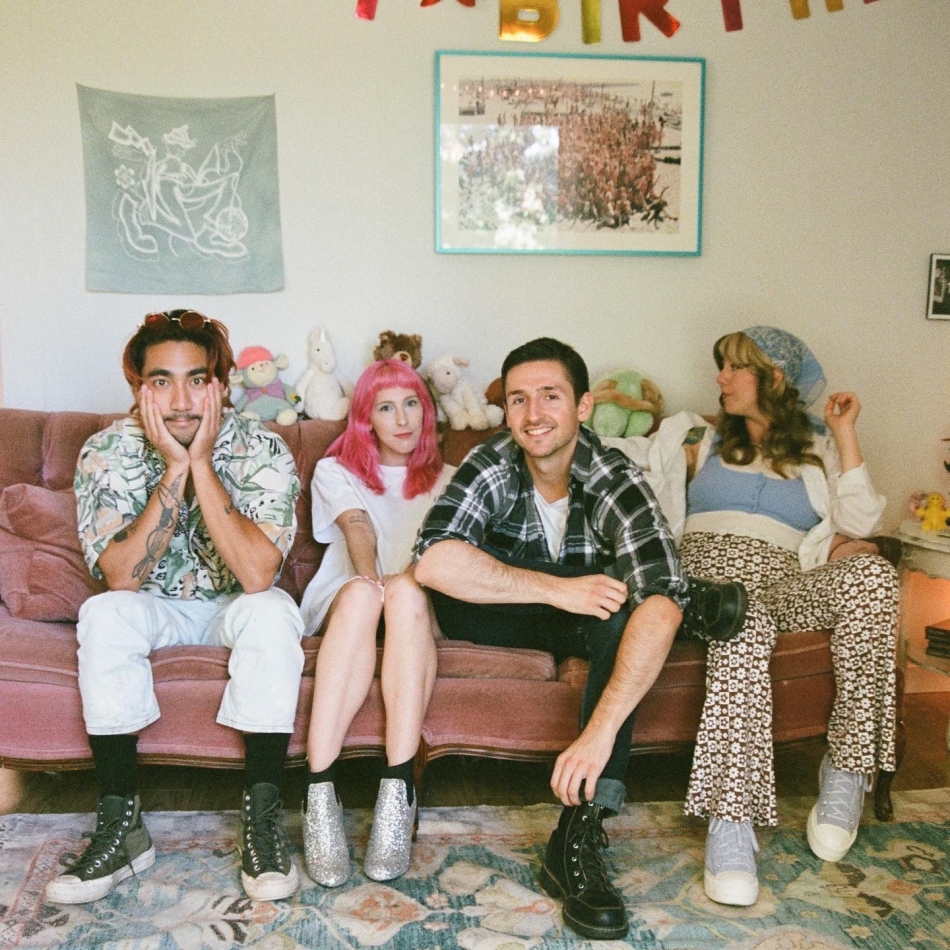 Ahead of the release of their new EP, Stuck in the Muck, we sat down with the members of Vancouver-based punk rock outfit Stuttr.

Stuttr’s new EP Stuck in the Muck, coming from Early Onset Records November 18, features sounds ranging from hard-charging hardcore to dynamic post-punk and is influenced by the likes of Metz, Refused, Pissed Jeans, IDLES and PUP. We got the chance to catch up with the members – consisting of Brie Dunphy on bass, Jono Delivuk on guitar/vocals, Ralph Cabebe on guitar/vocals and Heather Ross on drums – and learn about how this group came to be making music together. Read on to hear more about their writing process, their favorite post-show snacks, some of their most memorable show experiences and what we can expect next from the fun-loving foursome.

RN: Congrats on the upcoming release! Can I have you all introduce yourselves and each tell us a little bit about how you got into music?

Jono - I am Jono. I play guitar and do vocals. I have been playing music for most of my life and it has always been a passion of mine.

Heather - Hello, I am the drummer for Stuttr and outside of that I am a *stylist* by trade. Unadulterated curiosity led me into playing music and now here we are. Crazy.

Ralph - My name's Ralph, I am allergic to nuts. I don't know how I got in the band. I play guitar.

Brie - I play bass! I’ve been passionate about music for as long as I can remember. It’s like breathing at this point. Happy to breathe with these nerds.

RN: Give us some insight into your songwriting process – how did writing and recording this EP go down?

Jono - We usually start our writing with a riff or a song idea and then it expands from there. It will become this strange kind of mashed up jam until something clicks together with all of us and then we just keep grinding it out until we feel like it is fully formed. In regards to this specific EP, we had actually written a few of these songs before Heather had joined the band. Covid had hit not long after we released our first EP and we were deciding on how to move forward as a band. We had three songs that were pretty well fully formed and recruited Heather once restrictions eased off back in 2020. We wrote one more song with her and then decided to record this EP with our current line-up.

RN: A lot of your lyrics seem to have heavier themes – are there particular messages you’re trying to convey with your music?

Jono - I’m never really trying to convey anything super specific with my lyrics. I find I write lyrics best when I’m not putting too much thought into the process. Generally, when I finish, I look back and realize they had underlying themes that are, for the most part, about personal mental health struggles conveyed in a jumbled and disorganized way. If I had to pick the underlying themes of this EP, it would be anxiety, struggles with medication, the horrors of social media and the influence it has on our minds, and the countless attempts to squash negative thought loops.

RN: What’s everyone’s favorite track on this EP and why?

Heather - I think everyone keeps “Bob Mentality” in a special place cause it's the first song we all wrote together.

Ralph - Bob, you gotta listen to it.

Brie - It both slaps and bangs.

RN: I hear a lot of IDLES and PUP in your sound - would you say they’re some of your primary inspirations? What other bands do you pull influences from?

Jono - They are both inspirations, for sure, but we’re all over the map with what we listen to. I’m always looking for different music so it’s hard to say exactly what I was pulling from at the time. A few artists I always go back to are The Cure, Elliott Smith, Slowdive etc. and then on the heavier side of things I like Converge, Cursed, and then death metal typed stuff like Dismember and Entombed.

Brie - It’s always interesting to hear what comes out when we make noise depending on what we’ve all been listening to that week. I love hearing that from other artists too. It’s never what you’d expect. In this case, PUP and IDLES are two of my favs, so maybe I’ve been feeding the band subliminal messages. Keep your ears to the ground for our Tiny Tim-centric album next.

RN: Have you performed these songs live? What’s been the response to them?

Heather - We have!! people really thrash around – it's fun to see people havin’ fun, ya know.

Jono - Yeah, so far they have seemed to get a positive response.

RN: It’s been said that your band has a wild stage presence (would love to see it) – has this led to any notable experiences at a show?

Heather - A guy spin kicked off the stage – that was definitely notable.

Jono - Yup. The spin kick was a first. Also, at our first EP release show one of our friends (shout out to Dylan) literally broke his face on the back of someone's head and had to be rushed to the hospital. He was okay, but it was definitely memorable!

Brie - You know what I love, though? People get picked up as fast as they get knocked down. That’s the shit I love.

Heather - Writing has been a priority for a while now. We are trying to push out a full-length by the spring!

Jono - Hopefully, we’ll be able to tour at some point in the next year once we finish writing our full-length.

Heather - Ugh. Yeah, bedtime for sure.

Heather - The Rickshaw was the first venue I felt like really accepted since moving to Vancouver and I'm stoked for the day we'll get to play it! I love the Imperial, I hope it can reopen soon.

Jono - Fav in the city is probably The Rickshaw or Red Gate.

Brie - Red Gate really have their shit together when it comes to running a show. We always know things will go smoothly and it’s going to rule when it’s at Red Gate. Always wonderful people there, too. Rickshaw for the mems and the gallons of water I’ve drank in between sets.

RN: Okay and last question – What is an unexpected favorite artist OUTSIDE of your genre?

Heather - Oh, that's a good question. I love so many artists, but FKA Twigs latest album was on repeat for me this summer. Greentea Pang was another summer love. And I could seriously listen to Erykah Badu every damn day.

Jono - I mean, I guess I said some of them above. I’ll say Elliott Smith again.

Stuck in the Muck will be released to Early Onset Records Friday, November 18, 2022.

Keep an eye on Stuttr’s socials for updates and show announcements: