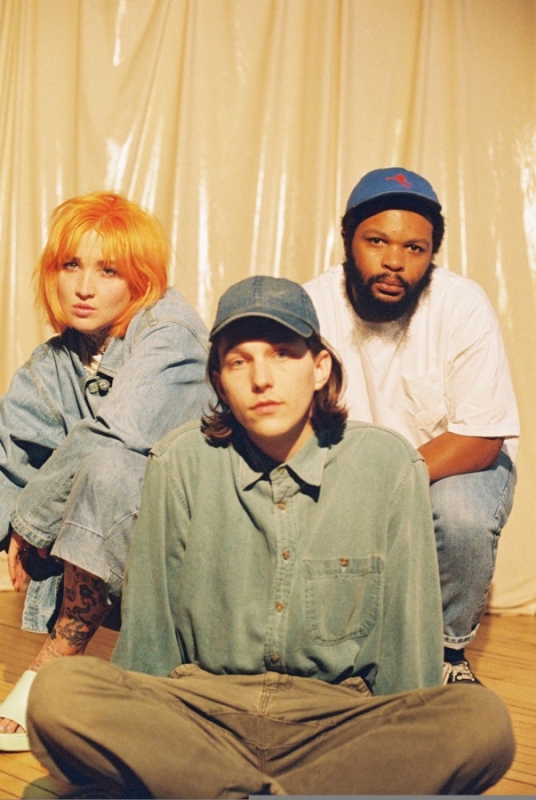 Entering into month five of COVID-19 hasn’t halted Chicago’s three piece Dehd from keeping their fire ignited. After cancelled dates at SXSW and a tour with Vundabar, we still have their latest record, Flowers of Devotion, to aid in keeping our days a little brighter. Recorded during the spring and fall of 2019, their third full length encapsulates the duality of emotions and the growth in learning to be self-sufficient while also being a proactive member of one’s society. Initiated in 2015 after a joint tour of solo sets for several weeks, Jason Balla and Emily Kempf formed their current project and since have recruited drummer Eric McGrady after meeting him in their local DIY music scene. The trio joined Fire Talk Records’ roster after their debut self-titled release in 2016, sharing their practice space with other local acts from the label like Deeper and Fran. “It feels really nice to be on a label with a lot of other bands that I really like”, states Balla. “That concept of being a label-family […] we thought maybe we imagined it, maybe it was never a real thing, but I feel that way with our label. I think we all get along on a personal level, too.”

Despite the adjustment to their album release cycle taking place in the midst of a pandemic on top of the political climate that’s exploding within their current surroundings, Dehd has taken everything that has come their way in stride. “I don’t have any discomfort or fear around how the record is getting released now”, says Kempf as she collectively asserts how her and the band are adjusting to the new normal. Their team decided to push back their album release from May to July with an affirming understanding that the music industry as a whole has plunged into newfound territory. “If we were silent for a year and didn’t do anything, I don’t think it matters”, states Kempf. “That feeling of a record cycle where you have to post, you have to promote, you have to be at the shows or you’ll fail, none of that shit is necessarily true. You don’t have to be relative at volume twelve even though our society tells us that that’s the vibe.”

Much of the members’ motivations has been thrust into organizing food drives with the aid of their 15-passenger van that they bought in anticipation of their spring tour, expressing gratitude that they’re able to put time and energy into their city’s activism. “It’s hard when you’re on the road  because you’re in a new place every night and you’re caught up in this weird cyclical dream-like state going on”, says Balla. “Being at home and waking up in the same bed every day, it’s a little easier to show up.” Kempf’s place of employment, Time Being Tattoo, is just one of many businesses in Chicago that are helping to collect food and supplies to distribute among the community. She highlights Assata’s Daughters, an abolitionist organization led by Black women utilizing a Black queer feminist lens as well as 360 Nation who use relationships and social capital as a means to promote empowerment in the Black community as just a few other worthy causes to uplift and donate to.

The pandemic has proven to be an insightful and reflective period for the band in conjunction with their long term stance on being active participants. “I’m questioning everything in my life, personally”, Kempf considers. “Where do I have privilege? Where do I have power? Where are my skills? And how can I use those to funnel towards the Black Lives Matter [movement] global warming, and in general the community? […] I’ve found my relationships growing and blossoming because I’m here in a consistent way. I’ve also found activism taking a stronger root in my life and I’m really fulfilled by it. I hope we can continue as a band to contribute to the change, it’ll just look different when we’re on tour next year.” With the current loss of live music in our day to day living and an isolation we're gradually becoming accustomed to, Dehd's enthusiam and vivacity reminds us that we're not alone, providing hope within our communities that we can all hold onto.

You can purchase Flowers of Devotion today through Fire Talk Records.