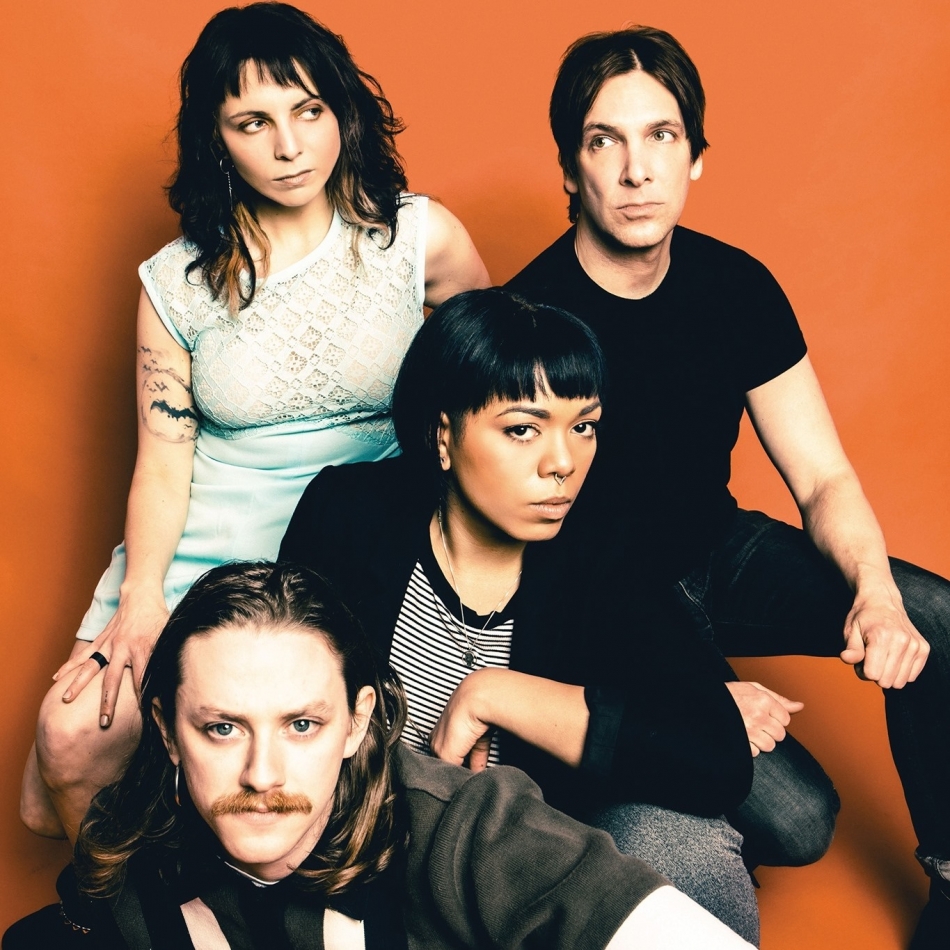 As their dissociative namesake states, Chicago’s art punk band Ganser fully understand the artistic means to encapsulate our climate’s physical and mental paralysis with their upcoming record, Just Look at that Sky, coming out July 31st off Felte. With some members working remotely and others having their respective fields shut down in the film and food service industries, the four piece has been acclimating to these surreal times while aiming to keep their momentum at a high, releasing singles and music videos during the last several months of the pandemic in anticipation of their sophomore record. With vocalist and keyboardist Nadia Garofalo’s film background and vocalist and bassist Alicia Gaines’ art directing experience, they’ve been able to combine their contacts and knowledge to craft hypnotizing and cinematic visions. “When you go into an album campaign, that’s time to work. It’s time to put your focus into getting this thing that you’ve spent so many hours creating out into the world so other people can hear it”, says Garofalo. “I think once that ends then it’s time to shift the focus and energy a little more to writing and going back to being creative. I don’t think any of us ever really truly stop”, she laughs.

They’ve also embraced the relationships that social media can provide between them and their audience while in-person live shows aren’t currently an option. “There’s been some really cool fan interaction”, states Garofalo. “It’s been nice to talk to people online a little bit more and have that connection that I don’t think we would have had otherwise […] and use our platforms for causes that have been coming up with Black Lives Matters’ protests”, including a candid article that vocalist and bassist Alicia Gaines wrote for Louder about the hurdles and dangers of her experiences being a touring Black musician. This prolonged period of introspection has aided Garofalo with prioritizing her mental health and sense of self-awareness. “This is definitely the most time I’ve spent on my own, isolated for this long”, she remarks. “I think on one hand that’s been difficult and on the other hand very rewarding in that I’m learning how to manage that. Sometimes it can be really hard to sit with yourself and think about the things that aren’t necessarily the most flattering things to think about yourself and examine that further, all working towards becoming a better person in the end.” Despite the physical distance between her bandmates, Garofalo has kept gratitude at the forefront and championed not taking each other for granted, especially as they’re not able to be on the road together.

As the music industry gradually works its way back up to a semblance of what it used to be, Garofalo’s passion for how she envisions productive and positive changes in the field incorporate finding ways to be more inclusive as well as greater financial means to support independent artists. “I would love to see artists actually getting paid more from streaming services. Like having Spotify really be something that actually helps artists more than they do. Right now it’s a little bit of a joke among us, like “maybe I’ll get a five dollar check 20 years from now!”, she laughs. “I understand it’s a really saturated industry but at the same time there is a place for people to be able to create a self sustaining project if they work hard enough. I think the industry right now makes it very difficult”, as she expresses further concerns with the future of independent music venues and the pending decisions as to whether the government will step up to assist in the monetary funding these vital spaces so desperately need. With the bands’ desire to strive for continual growth amidst uncertainty, Just Look at that Sky is precisely what so many of us crave during this time of instability. “We ultimately decided that this album is even more relevant now than when we wrote it”, states Garofalo. “I don’t know if there would be a better time to put this album out […] it was clear to us that this was the time to do it, and we’re just going to do the best we can to get it into people’s ears.”

You can pre-order Just Look at that Sky via Felte Records here.