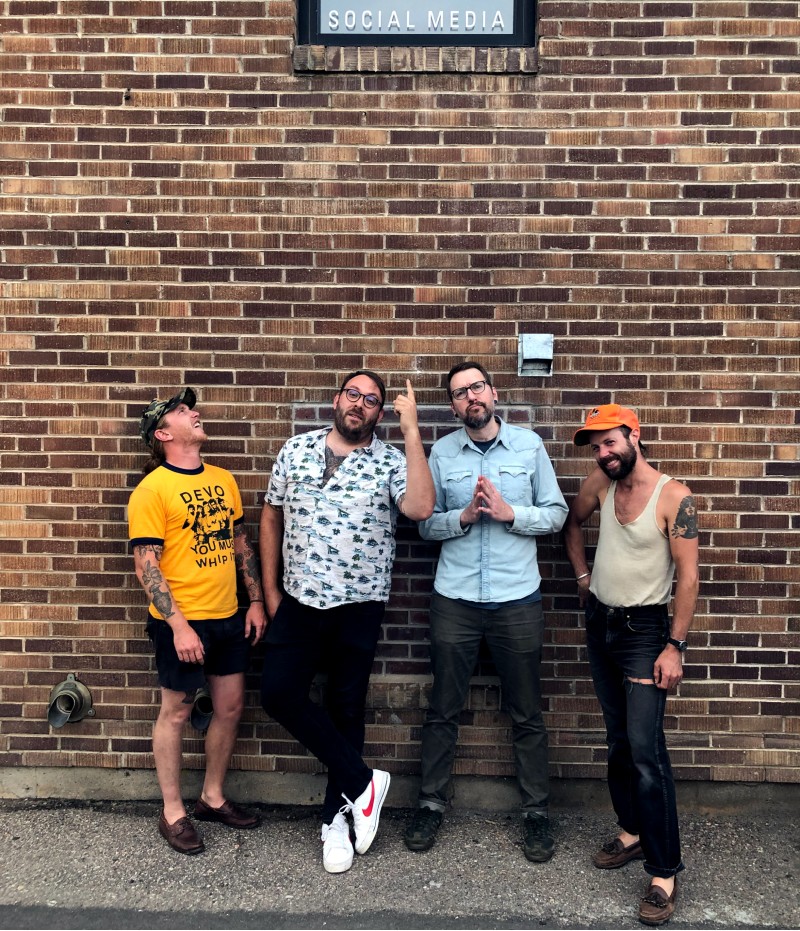 Hailing from northern Colorado, indie rock/punk band Dirty Shrines have just released "Every Mile", the lead single from their upcoming debut full length "Digital Ego", which will drop September 17 via Black Numbers. "Every Mile" is a straightforward rocknroll track with crisp and clear guitars, huge sounding drums, and a talk/sing vocal somewhat reminiscent of The Hold Steady, with a catchier chorus, grittier vocal attack, and killer backing vocals to pull it all together. Lyrics chronicling regret keep you listening closely, as hooky guitar riffs and said backing vocals dispersed throughout tie together the impressive debut track.

I had the chance to discuss the new record, covid and other topics with singer/guitarist Tim Browne. Check "Every Mile", the interview and links below. Pre-Order vinyl here.

1. How did Dirty Shrines come together?

When I (Tim) moved back home to Colorado from Philadelphia in 2018, I had a couple of songs and a smattering of riffs and ideas sitting around that were probably a little too esoteric to be Elway tracks. Me and Drew and Brian decided that we wanted to start a band to play random gigs and just have fun making music together. We put together the demos for Digital Ego in Brian's home studio and I was playing drums. We must've tried out 5 or so drummers before we just called our longtime pal Max to come in and he naturally crushed it. We've been playing together when the world permits ever since.

2. Do you approach this band differently than your current and/or former projects?

Absolutely. We were trying our best to work within our means to not make this sound like Elway or Chumped. We wanted to make songs based on whatever our whims that week were.  Sometimes Steely Dan, sometimes Jets To Brazil, sometimes Big Star, sometimes Gin Blossoms or something else. The goal was to try to experiment to make music that reflects a constantly changing taste rather than resting on punk laurels. That, and we wanted to experiment with lots of fun effects.

3. What was the inspiration behind making Digital Ego?

It didn't necessarily start out this way, but the writing of the record wound up being influenced by watching the way that people just lose their minds on the internet, ourselves included. The way we are incensed, motivated, addicted, compelled, and manipulated by the internet gets sadder and more dystopian by the day, so that's what we wrote about. I wouldn't go so far as to call this record a concept album, but the throughline is definitely "internet brainworms."

4. Are there plans to tour on the album after it releases?

As you might imagine, it's difficult to plan things for a relatively anonymous band during a pandemic that won't seem to go away. We do plan on playing some shows after this thing comes out though.

5. How has covid affected your musical projects?

Aside from derailing our ability to make shows, it's only increased productivity. When the dust all settles, I'll have made it out of this with a couple of LPs worth of recorded music that I am super proud of. Given the circumstances, I don't think things could have gone better.

6. Do you find the current state of the music "business" frustrating or liberating?

I'd be lying if I didn't say that I'm mostly pretty put off or even disgusted by most of it. I mean, actual human engagement with music has changed so much just in the time that I've been making and playing it. In order to get people to listen, it seems like you have to package your music just right and put the right amount of tinsel on it to get people to take notice. I'm not a salesman and the idea of contorting in order that people will pay attention is kinda tiresome to me. That being said, streaming has really leveled the playing field and democratized the ability for artists without tons of money or influence to get their music heard with the right amount of hustle, so my opinion is clearly trash. I dunno man, I just want to work hard to write, record, and play the music I love and have people listen and enjoy it without me having to deal with any of the shit in the middle. That's the dream.

7. Tell us about your favorite gear (guitars, drums, etc)

I can't speak for anyone else in the band, but here's a list of my favorite shit that was used on this records:

Walrus Voyager (This, along with a JHS Morning Glory is the most commonly used overdrive sound on Digital Ego.)

1992 Gibson Les Paul Studio (This guitar has been with me my entire life as a musician. It had its headstock snapped off in Philadelphia. It was lost in an airport in Moscow. It's been banged on and sweated in at hundreds of shows and still plays and intonates like a champ. None of my other guitars even come close. Brian set it up just before we recorded Digital Ego and put in a pair of Burstbucker 3 zebra pickups, redid the wiring harness, and put on a new tuneomatic bridge. The thing sounds fucking great.)

8. What's next for the band after this release?

We'll play some shows, I reckon, so long as the world doesn't completely fall apart.