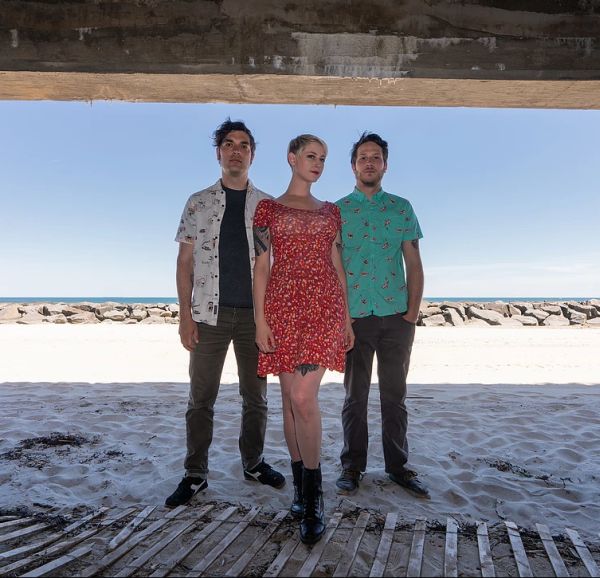 Asbury Park, NJ-residing indie rockers Dentist have caught a wave of listener and critical acclaim with the release of last summer’s Night Swimming, which surfaced via Cleopatra Records. All three members of the rock/pop/punk band kindly chatted about their breakthrough third album, their engaging hybrid sound, and much more in an interview that took place several months ago. Rebel Noise is pleased to present the full Q&A with Dentist below.

Hello Emily, Justin, and Matt!  Your latest album, Night Swimming, came out on Cleopatra Records in the summer of 2018.  What has the progression been of your sound, and/or lyrics, since your inception in 2013, and since the release of your debut album in 2014?

Emily:  We initially started writing Dentist songs for fun. Our debut album was a collection of songs that we had recorded at the time and were playing live.  The majority of them were lighthearted and the lyrics were very stream of conscious.

Justin:  It wasn’t until we started playing shows in 2014 and saw a positive local response that we started to take it more seriously. Our second album Ceilings was written with a goal of making a cohesive album that was something we would enjoy listening to. The music took a slightly heavier turn.

Emily:  Musically, Night Swimming is our most diverse album to date.

Asbury Park is not known for its tasty waves, so how did you decide to dive into your surf-rock sound?  Is there a desire to relocate to the California coast?

Justin:  Many of our musical influences have come from California.  Since an early age I’ve been attracted to that sound. We are fortunate to have grown up on the Jersey shore, however, and so close to a great music community in Asbury Park.

Matt:  Although there is not much of a surf music scene in NJ, we love living there. Our most recent tour through California was a blast and we definitely look forward to coming back!

Do you feel you have an edge in creating surf rock/pop on the East Coast instead of the West Coast?

Emily:  It is true that this style of music is more prominent on the West Coast. Perhaps we do have more of an edge back home. There are less bands that have a California sound, but that’s not to say that there aren’t tons of bands on the East Coast creating great surf-inspired music.

What do you like best about living in Asbury Park?

Matt:  We all grew up in towns outside of Asbury Park and then gravitated to the area because of the music scene.  The town is a great place to be a musician and it gave us the chance to meet many people, including each other.

Have you ever written material while down the shore - like actually sitting on the sand and watching the ocean, or maybe get song ideas from being in that environment?  Or is it just too crowded and noisy to do that kind of creative process?

Emily:  We haven’t done that yet, but that seems like it would be nice on a quiet day.

What specifically attracted you to the "surf" music style versus other types of music?  (Meaning, why not play traditional indie rock or garage rock?  What sparked the thought and desire to play "surf music"?

Justin:  I had been trying to figure out a musical direction since I started writing music seriously.  I’m very into The Beach Boys, and bands they influenced like the Shins.  The band Emily and I were in before Dentist was definitely trying to do a Shins/Death Cab for Cutie kinda thing.

Emily:  We got a bit bored with playing that type of stuff, even though we still love it, and decided to take the surf/reverb sound and combine it with more of a punk sound.  Also, without even thinking very much about style, I had always recorded my home demos with a lot of reverb on my voice because I liked the way it sounded.  I just always asked for a lot of reverb on my voice and that brought us towards a surf sound.

What are some of your Californian musical influences?  Are you fans of classic surf rock acts like Dick Dale and The Ventures, as well as the aforementioned classic surf pop of bands like The Beach Boys and maybe Jan and Dean?

Justin:  We love the older surf bands and that was a huge influence, but we were definitely inspired by stuff that was happening around 2010 like Wavves’ King of the Beach album.

Have you ever thought about having harmonizing female and male vocals on a song? Or maybe you have already done that?

Emily and Justin - I'm assuming you are married/in a relationship (you met in 2008).  How does the dynamic between you two as life partners affect the band?  Do you feel freer to criticize each other or not sugarcoat issues during the songwriting process?

Emily:  We met because of playing music and have been writing together since we met, so it’s kind of second nature at this point.

Justin:  Sometimes issues in the band creep into our personal lives, but we’ve gotten good at not letting any conflicts linger too long or affect us too much.

How did you two connect with Matt?  Was he a friend and drummer who then became part of the band?

Emily:  We officially started Dentist in 2014 and worked with two other drummers prior to Matt.

Justin:  Right after Emily and I did a month-long tour of Canada and had the drummer from the band we toured with play drums, we came home and were without a drummer.  The plan was to try and find one, but before we even got to that point, I randomly got into a conversation with Matt at a bar and mentioned we’d be looking for a drummer - and it so happened Matt played drums.

Matt:  I had seen Dentist play before and they were one of my favorite local bands. I was stoked when I got the chance to play with them, and it’s been a great time.

What are some highlights for you over the span of your music career so far?

Emily:  There have been a ton. Our first five-week tour through Canada, going to SXSW and the response that we received in Austin, getting to put out records on two awesome labels [Asbury Park label Little Dickman Records and Cleopatra Records], and our multiple tours around the US including the month long tour that were on in the summer.

Matt:  Also, one of the great things about playing music is all the friends you make and people you meet from doing so.

Matt:  We try to put as much energy into it as possible.  Most of our songs are short, and we try to have quick transitions.  We are all heavily sweating by the end of a set.

You were on a big tour from mid-July to the end of August last year, covering much of the US.  What was the experience like?  Do you see more similarities in people, or differences, in general, because of our divisive cultural times?

Emily:  Every town has a unique culture. It’s been fun to see what’s happening and popular in so many different music communities throughout the country.  In general, though, people have been cool everywhere.

Justin:  Generally the type of people that go to shows like we play and are part of their local music scene are usually very supportive and friendly.

How do you get heard in the current ultra-crowded music market?  Do you do anything specific, like PR for music sites, promotion on socials, or go after premieres and airplay?

Justin:  There isn’t an easy answer to that question. You just have to get out there and get heard and apply yourselves as many ways as possible.  Goof PR definitely helps, but you also have to get out and tour.  The more you put yourself out there, the more opportunities you create.