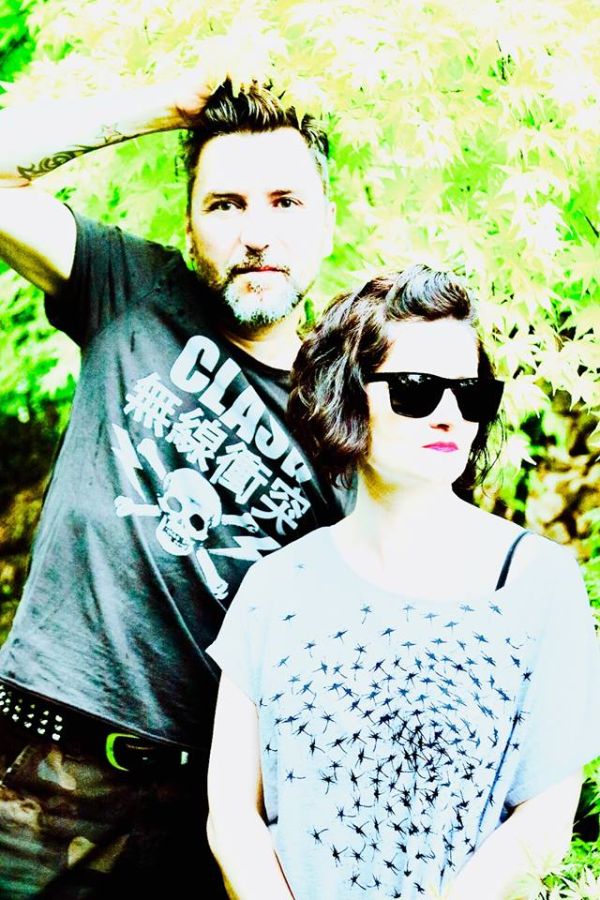 Hamburg, Germany’s dream-punk band Seasurfer, founded and led by long-time songwriter/musician Dirk Knight, is a shining light in the shoegaze and dream-rock fields. More a music project than a band, Knight surrounds himself with a rotating cast of collaborating musicians and vocalists for each Seasurfer release.

Currently, Knight is joined by Hamburg-based singers Apolonia and Änni Bird, as well as British bassist Steven Burrows of And Also The Trees. Their latest EP, Vampires, materialized in the second half of last year, and recent heady track (and video for) “venusberg” came out this past March. Much more material is expected to be released during the rest of 2019.

Dirk Knight, who in the ‘90s was part of the ‘Heavenly Voices’ scene and founded the band Dark Orange, kindly detailed his sound and vision in an interview that took place late last year.

Hello Dirk! So good to touch base with you about your mesmerizing music project Seasurfer. Who is in the current line-up?

On our last record, the Vampires EP, Apolonia from Hamburg did all the vocals, and the bass was recorded by Steven Burrows in Florida. He is the former bass player of And Also The Trees from the UK and an old friend of mine.

I’m also working on the next record with Apolonia and the other Hamburg based singer Änni Bird. Änni was also live on stage with us in 2017. [The upcoming album, Electronic Monsters, is slated to release this fall, 2019.]

But our next release will be a mini-album titled the dreampop days with Elena Alice Fossi from the Italian/U.S. electro band Kirlian Camera [with mixes from 4AD label’s John Fryer].

Seasurfer seems to works more like a music project than a band, where you are the founder and core member who collaborates with different contributor for each release. What do you find stimulating and/or challenging about this type of set-up?

I’m always working to achieve the best result for the songs I am working on. I create soundscapes and ask vocalists if they are inspired to do vocals.  After they come in and we work together, sometimes the result is not the same as the original idea. That`s the creative process I love so much.

The vocalist has to be willing to allow changes to the vocals throughout the process. They also cannot take themselves too seriously, but submit themselves to the best result. Unfortunately, this sometimes creates conflicts.

I also had to learn that I really have to be consistent and actually can`t work with fellow musicians with too many wishes for self-realization. I think it`s a theme for a lot of musicians… Don’t get me wrong though - It was a real pleasure to work with the vocalists Dorian E. and Julia Beyer on the first two albums!

Your latest record, Vampires EP, arrived last year via Saint Marie Records.  What has been the progression of, or difference in, your sound, and/or lyrics, since your start in 2013, your 2014 debut album Dive In, 2017’s Under The Milky Way… Who Cares?

In my view the changes have been small. From the start, I wanted to create my own sound with as few compromises as possible. I know that this makes it hard for the musicians I work with, but I’m passionate and I am also a workaholic. At times it might be too much pressure for people I am working with. I am also looking for new sound ideas and there will be hard changes with the songs. I am working on this at the moment as I am getting a little bit tired of this old-fashioned [traditional] stuff.

Your 2nd full-length, Under The Milky Way… Who Cares, landed in 2017.  Why did you decide to release the Vampires EP a year later instead of a third album?

I was getting tired of waiting so long to complete an album and the manufacturing of vinyl seems to take a hundred years. When the last LP came out, I lost the emotional connection to it. I was working on the new songs and it felt like old stuff once it was released.

I also think it’s not necessary to do a full-length album because most people create their own playlists. We will do vinyl and CD later with the best songs of all the EPs and singles for the lovers and collectors of the real thing. I also still buy CDs of my favorite bands.

Have you always been located in Germany, and specifically in Hamburg?  Have you lived in any other locations/cities? What influence do you think your German roots have on your sound?

I was born in Hamburg and still live there. Hamburg is ok, and maybe the most British town in Germany. I must admit that I am more influenced by the English sound and I have often thought about going to England. I also like the English way of life and often I feel like a stranger in my own country.

Would you describe your music as shoegaze too?  Were you into the original scene in the early ‘90s in the UK? Did any of those bands help in shaping your sound, or your first ideas when starting Seasurfer?

Shoegaze is a wide field and I feel at home with it. Especially when it comes to creating spacey sounds with lots of pedals. Original scene…Yes, staring at them and hopping around with them onstage, haha. I saw the Cocteau Twins, Slowdive, and the Cure live in the older days, just to name a few. They all came to Hamburg. I also saw Bad Brains, the Damned, and other punk bands. I would be lying if I said they all did not affect me.

What are some highlights for you over the span of your music career so far?

Working with Robin Guthrie from the Cocteau Twins, working with Wyatt Parkins from our U.S. record label Saint Marie, getting in touch with Andrew Saks from Sway and [more recently] with Martha from Bowery Electric, Elena from Kirlian Camera, and Andrew from Airiel. All bands or musicians I really like a lot. I have CDs from Sway, Airiel, and Bowery Electric and it’s nice to get in touch with these guys.

Also not to forget to include my Hamburg singers Apolonia and Änni, as well as the song I did with wonderful Krissy Vanderwoude from our U.S. labelmates Whimsical [“Blind Me” on Saint Marie compilation Static Waves 6 released in November 2017].

How do you get heard in the current ultra-crowded music market?  Do you do anything specific, like PR for music sites, promotion on socials, or go after premieres and airplay?

I am happy to have a U. S. label [Saint Marie] that likes my sound and who is promoting it.  I try to support them by using Facebook, YouTube, and Twitter, and I am also happy to get in touch with all the people out there who like our music.  You don’t have to get down [on yourself] if you are not a top-seller. It’s hard, I know. You can’t change and make [only] the sound the people want to hear or you will lose yourself and your own personality.