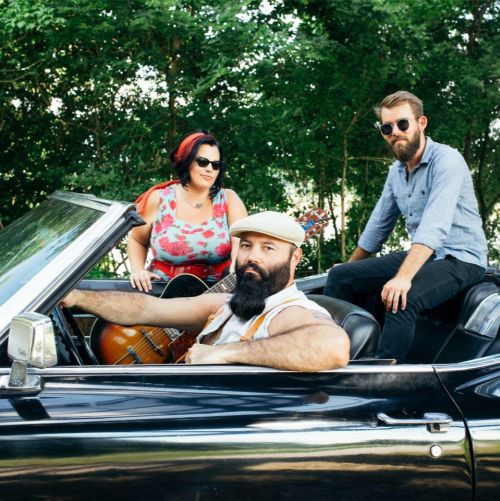 The Rev. Peyton of The Reverend Peyton’s Big Damn Band digs into the details of their rousing and socio-politically relevant music.

Hello Rev. Peyton! It’s so good to have the chance to touch base with you about your sonically spirited and lyrically relevant music. It’s an exciting time for you, what with the wave of accolades you’ve been riding since your latest album, Poor Until Payday, was released and your upcoming European tour.

Where are you now and what are the vibes like at the moment?

Well, where am I physically, I am in Germany on the way to the next European show, and where am I mentally is a very different question. I feel like I’ve been on a roll recently musically. I’m really excited where we were able to take this record, and I know the next one is going to be even better. I’ve been writing a lot of music lately too, and just trying to learn and create new things on the guitar every day. That’s been my goal the last couple of months; either learn something or create something new every day.

You’ve built up quite a following over the years, mainly due to your exhaustive touring schedule where you’ve performed up to 300 days of the year. Are you still rolling with it (physically; emotionally) or does that kind of plan take its toll?

In some ways it gets easier, and in some ways tougher. As I get older, it gets harder for me to deal with certain aspects of it, but I think I love touring even more than I used to. I think my biggest problem now is that I know even better who I am, what I need, and all that comes with it. So I don’t like to waste time. The fans certainly make it easier. The energy you get back renews you.

Speaking of which, you’re booked for the summer on a European tour that’s kicking off imminently. What are the differences between playing on the live circuit overseas versus playing in the U.S.?

Oh man, the differences are plentiful enough to write a book. Crowds respond differently, the accommodations are different, and the travel is completely different. The hardest part for me in Europe is not being able to have all of my musical gear. We have to rent a lot of stuff and I miss all of my custom, vintage, etc. We are trying to work out getting more of our own stuff over here though. We’ve been playing in Europe for 13 years, so we’ve just learned to navigate it all.

Tell us a bit about the type of guitar(s) you use and your finger-style picking. Have you always played the guitar as you do now, or has your way of playing evolved over time?

I use mainly vintage American guitars, Nationals, Supro, Harmony’s, Kay, Silvertone, etc. I also play a lot of custom, homemade, and folk art instruments made by all kinds of builders. From my custom one-of-a-kind National Guitar to three string Cigar box guitars. On stage I might play as many as 8 or 9 different tunings, so I always travel with a “Guitarsenal.” This tour it’s six different instruments. I play finger style country blues, so I’m the bass player, rhythm guitar, and lead guitar all at once! I’ve played this style pretty much my whole life, but I’m definitely better now than I used to be. I’m always working on getting better.

Besides your output as Reverend Peyton’s Big Damn Band, another jewel in your country-blues music crown is playing guitar on and arranging protest song “Eyes On The Prize” by John Mellencamp. How did this connection come about?

John has been a fan for a while, and he was even out in the world saying nice things about us to all kinds of people. He reached out through a mutual friend, and asked if I’d come and play some guitar. It was a massive honor for me, and I loved being able to arrange that piece, and then record it live with him. He is such a talent. His voice is huge, and his list of hits is so long. My first concert was actually John Mellencamp when I was like 8 years old. Old spirituals like this are my wheelhouse, and it is extra heavy considering the history of this song.

Continuing with the above association, “Eyes On The Prize” was a re-working of the traditional folk song “Keep Your Hands on the Plow”. This kind of music is much needed today in the restrictive, intolerant, ignorant, and backwards-looking socio-political climate we’re trying to survive in. Out of your own songs, which are the most important ones that shine a light on our collective plight?

You can go back through our catalogue and list a ton of songs that deal with the struggle of the blue collar, regular person. That’s who I’ve always wanted to champion. People like my family, who are at the bottom trying to make ends meet. Trying to stay alive, and navigate a fast-changing world. This latest record though I wanted to be about hope and perseverance. I’ve felt trapped by so much lately. No one really even knows how to navigate where we are at, and I don’t know if we’ll understand what the internet did to humanity until we can look back at it.

I don’t like to make music that feels like it is trying too hard to be something. Good music should come like breathing... it’s born of realness and practice, but when it comes out finally, it should flow like a stream. The best music is personal. I like to make music that speaks from my own heart. Hopefully that made some sense. I guess regardless of the outcome, you can bank on the fact that our music comes from a real place, deep in the heart. Even when it’s just fun.

You admire many of the country and blues greats and carry the torch for traditional roots and blues music. Which musicians have had the most influence on your sound and vision?

There seems to be a dearth of women musicians in the history of country-blues music, due to the restrictive retro-times and not talent, one presumes. Are there any other women musicians who have also inspired your music and/or outlook?

I think history has forgotten that some of the first big stars of blues were women. Ma Rainey and Bessie Smith were bigger than any men of their day. Things go in waves. Sister Rosetta Tharpe was always a big influence on me, if not just musically, but also for her showmanship. She influenced guys like Chuck Berry and Little Richard, and a whole lot more! Modern people are rediscovering her, but she was a big influence on early rock and rollers. I think it was actually the religion more than her being a woman that kept her from being on so many lists of early rock and rollers.

Rock and roll and blues were the opposite of religion in many folks’ minds, but you can’t have rock or blues as we know it without the influence of spirituals and tent revival-style showmanship! Sister Rosetta Tharpe’s influence can’t be denied. As soon as you hear her music, it’s obvious.

Jessie Mae Hemphill was someone who we got to know personally, and she was a massive influence on both men and women. She was as tough as nails, and so deep and talented. She comes from country blues royalty. Her whole family made great music. Women have always made great music - I think it is the critics and historians that have dropped the ball on it. Artists create, but these critics and historians get to be the gatekeepers of memory. It can actually alter our perspective on the way things actually were in a time and place.

Continuing on the subject of women in music.... My wife, Washboard Breezy, completely rocks on the washboard. Because she doesn’t strum stereotypically on a guitar, sweet feminine sounds, people are sometimes shocked. They shouldn’t be, but they are. If it were a man doing it, I think people would just write things about how hard and on time and perfectly in the pocket the playing is, but instead it’s about her clothes or facial expressions or whatever. It’s tiresome.

She puts on a great show, and she plays right on the money. I don’t know if I’ve ever seen that in print, but I bet a Google search will bring up tons of “reviews” about the way she looks. I don’t think it’s a lack of art being made now or ever, I think it is the gatekeepers. Even when women in modern music are brought up, she isn’t mentioned near enough, because it’s not the stereotype people want. Women can be the rhythm section, they can be up front, they can be producers, etc.

In general, what has the audience/listener reaction been to your music? Can you give a specific example/quote (or two) from someone in the crowd at a show, or someone online, telling you about how your music has changed their life or opened their eyes (well, ears)?

One of our first shows on the road, a person who had been wheelchair bound for 20 years got up and danced. Their whole family said it was a miracle. I always felt like that summed it up pretty good - haha! Oh, and we are a lot better than that now!

Poor Until Payday came out on your label Family Owned Records via Nashville’s Thirty Tigers. How is having your own record label working out? Are you planning on releasing other artists as well?

I’m a blues man, not a businessman. I don’t know if I’ll ever put out records for other people.  Thirty Tigers is great because you put out stuff through them under your own “label” - it’s more about autonomy than it is numbers.

As previously mentioned, your wife “Washboard” Breezy Peyton is in the band, as well as Max Senteney. Does your line-up expand for the stage? And do you have a home base to relax at once you’re off the road (if that ever happens!)?

The lineup is always the three of us. Same on the records. All that guitar is me. Sounds like a bass player, but it’s not. It’s my thumb keeping a bass line while my fingers pick the lead in that old country blues style. All live to analogue tape on the records, and all 100% live on stage. No loops, no effects, no computers. Real, from the heart, and handmade.

We do have a home - it’s a log cabin deep in the southern Indiana hills in Brown County, IN.

What else do you have planned during your European tour? Do you have time to visit the sights (and/or restaurants)?

I hope we have time to get some fishing in! That’s what we love to do with our spare time on the road. We love to connect with nature! 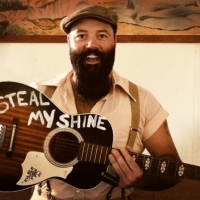 Reverend Peyton Wants You In Their New Video 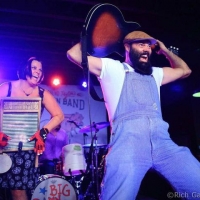 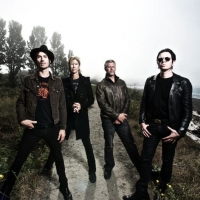