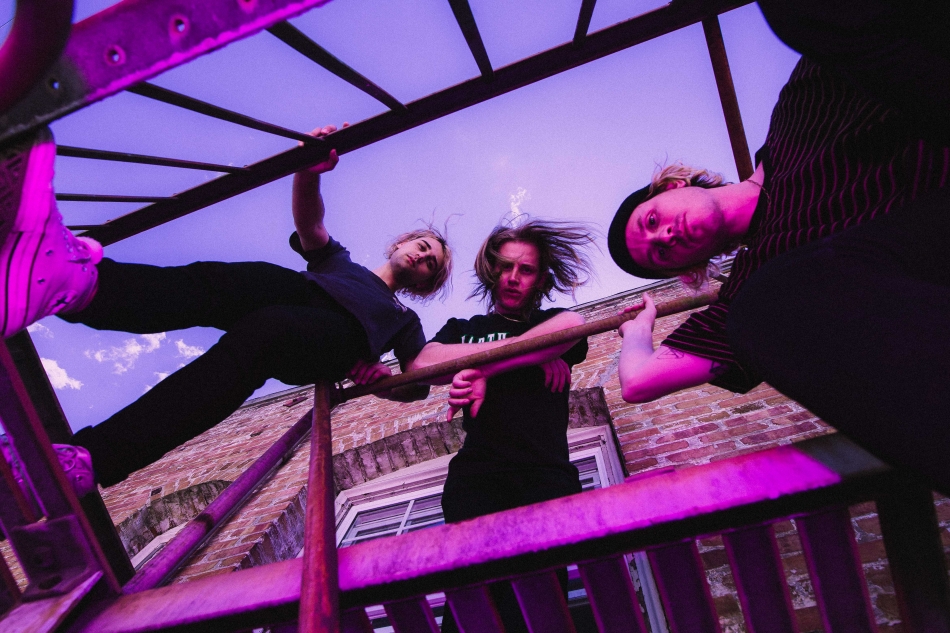 Constantly striving to carve space for greater freedom and greater passion, shoegaze act Tennis System are consistently finding a ground to call home. Moving from Washington D.C. to Los Angeles eight years ago, guitarist & vocalist Matty Taylor trimmed down as a trio from a five-piece act after incorporating bassist Sam Glassberg and drummer Garren Orr in the band. The members have since formed a greater collaborative process in terms of writing lyrics and sharing a part in their project. “We’ve grown as a three piece in that we’ve found out how to work off each other and that’s how we started writing”, states Taylor. “Before it was a different process, where I would write a song and bring it to practice and we’d fill in the gaps, whereas now we write songs and create everything together.” Glassberg emphasizes the partnership felt in Tennis System and how that in turn led to an even greater positive scope of creating. “Learning how the three of us worked together was a really interesting process and now we’re really at the height of that. It was nice and super collaborative where we all wrote everything together, it was a much more joyful experience to write.” When commenting on the recording process for their latest record, Lovesick, Glassberg maintains his optimism about the album’s undertaking. “This record was really a positive experience for us because it was all what we wanted to do in the best way possible. We did it all live to tape so it sounds like us to the nth degree. It’s the best possible version of ourselves as individuals and as a band.” After an encounter with Ryan of Graveface Records during their 2018 SXSW Showcase with Part Time Punks, they decided to work together to put out Lovesick. Citing Ryan as a constant supporter of their music and creative ideas, their collaborative force came naturally and seamlessly for their 12 track album which you can pre-order here before its release tomorrow, September 6th.

Utilizing his experience while at film school, Taylor explored new territory when filming their music video for “Turn” (directed by Bradley Scott). Praising guitarist Robert Fripp as inspiration, the band wanted to take another route from their previous music videos to craft something more dream-like and surreal than they had in their prior videos. “Previously we had done more performance-oriented videos and band specific videos […] The past videos have always been a concept we’ve had and someone changes it drastically, but this is the first time where we’ve been happy with something from the band, by the band, and the next time we do a video we’re going to go a similar route on doing it on our own and finding a director that has a similar vision.” One of their standouts on Lovesick, “Turn” poses the question of attempting to find meaning and passion in a world where you’re caught in a repetitive cycle of routine framed with distorted instrumentals as the track comes to a close.

The band also shares a love of German films and Japanese artwork and comics and enjoy incorporating elements of each in their music and merchandise, challenging their audience and listeners to take the extra steps to decipher its meaning. Spending his summers in Tokyo and Japan for three months out of the year visiting his dad, Glassberg has fond memories of the city and staying abroad during his childhood years. “We’ve not yet played Japan, but we definitely want to”, chimes the band excitedly. With a profound love for a variety of shoegaze acts, including Ringo Deathstarr and Blushing who they recently played a west coast tour with, Japan might not be too far off the horizon for the trio. However frustrations lie immanent when it comes to other people’s depictions of what they think the band should look or sound like. “people as a commodity is very frustrating”, states Glassberg. “We’ve worked with people before that have not seen eye to eye with what we want to do and want to use us as a vehicle for something else; whether it’s writing songs, an image, or who we tour with, and that’s really kind of a bummer.” Taylor also comments on the disconcertment of the various roadblocks when playing live shows. “We find not getting to play out the most frustrating. Not so much L.A., but for whatever reason it’s a daunting task to get tours. That’s been the most challenging thing. We’ve got a European agent that we love and a manager here, but no U.S. booking agent. We do as much as we can with what we have available.” For those of you fortunate enough to be in Los Angeles, Tennis System will have their album release show on Saturday, September 7th at The House of Machines with Spare Parts for Broken Hearts and Glaare sharing the bill. You can purchase tickets for the event here.

Renewal Through Toxicity: An Interview with Wingtips