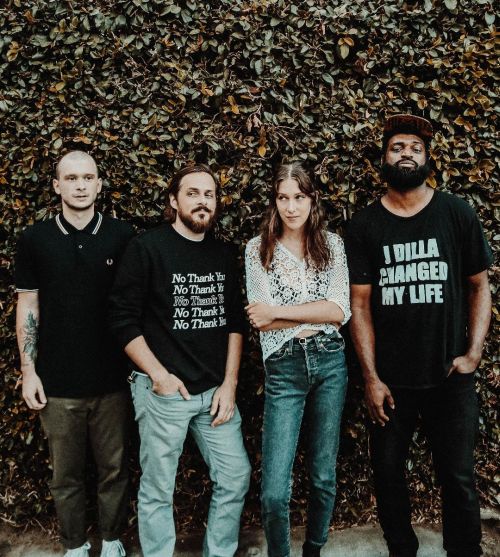 L.A.-based (by way of upstate New York) musician Tony Bucci is at the core of Broken Field Runner, an emo-inspired indie rock music project/band that will be releasing their upcoming album Lay My Head Down on July 19th via Jetsam-Flotsam.

Broken Field Runner’s debut LP, Clear a Heaven So This Earth Can Breathe, came out in 2015 and the band followed it up with 2017’s Heavy Hanging Fruit EP. The dynamic to contemplative Lay My Head Down showcases Bucci’s emotional depth paired with pop-punk spirit.

Bucci has kindly taken the time and focus to respond to the socio-political-driven questions of our new Protest Interview series. He does so in succinct and relatable style; his list of concerns is the same, or similar, to what most rational and anxious Americans (and people in general) are feeling during these traumatic and divisive times.

My name is Tony and, at different times, I sing and play guitar in or perform alone as Broken Field Runner. I am a story-teller first and a songwriter second, so my musical vision has always been to tell a story using the most appropriate (or jarring) sonic canvas I can. Sometimes that translates into bouncy 3-minute-thirty-second punk-inflected power pop jams. Other times it comes out an 8-minute slow-burner meant to harpoon the listener and drag them into the narrative. The thread that ties all of our songs together is the emphasis on attempting to make people feel something.

To live in a time inextricably linked to technology and our instant access to information, it’s really difficult for me to connect with one specific issue. I’m concerned with the rise of gun violence in America and the inability (or unwillingness) of any branch of American government to do anything about it.

I’m concerned about what can only be described as a systematic push toward limiting the rights of womxn to choose and the effect that movement’s success has had on the average womxn’s ability to obtain healthcare, contraception, and access to safe, legal abortions as needed.

I’m concerned about unchecked police brutality, excessive force, and the effect both has on the safety of my black and brown bandmates and friends, the institutional racism that remains as American as apple pie, and the cognitive dissonance so many of my white relatives, friends, and neighbors (including myself at times) approach these issues with.

I’m concerned about the rise of fascism, the move of white supremacists from the shadows to the limelight, and the complete apathy I’ve seen from so many of my peers in creative fields.

I’m concerned about transphobia and the safety of my queer friends and relatives.

I’m concerned about the future of the world considering there is a continent sized island of trash floating in the Pacific Ocean and an American President happily and openly rolling back environmental protections.

I’m concerned about American involvement in Venezuela, Mexico, Syria, Iran, and with foreign policy as it relates to Russia, China, Korea, etc.

I’m concerned about the safety of migrants traveling hundreds if not thousands of miles to seek legal asylum in the United States.

I’m concerned about the men in my life and how they think about, interact with, and treat the non-men in my life. I guess, it’s safe to say that I am concerned.

The most “political” song I’ve written in a long time is the song “Millennial Pink” off of our upcoming full length record Lay My Head Down, out on July 19, 2019 on Jetsam-Flotsam. The song is a meditation on what it means to be a millennial coming of age in these, the biblical end times (I’m only partially joking). These are the lyrics in full:

I used to answer this question with “The Plan” by NOFX because of the first verse: “Call it libertarian ‘cause we do as we please. We don’t need fear, or force, or farce to know morality. It has to do with freedom and personal liberty. I don’t fuck with you, don’t fuck with me.” But now, the lyric that most resonates with me as a political statement is in “Supporting Caste” by Propagandhi: “Do what you feel you must, but as for me I was not put upon this earth to subjugate or serve.”

When I’m not making music, I work as a social worker in northeastern Los Angeles County helping to assist families that have children living with developmental disabilities to access services, advocacy, assessments, and financial support. Recently, I was actively involved in unionizing my workplace which ultimately involved a majority of our workforce striking for better wages, compensation for employees who speak a second language, alternative work schedules, more time off, sick leave, and vacation time, and access to representation from union stewards. We became the first Regional Center in California to unionize in something like 15 years.

Since I find it difficult to align totally with a single cause, or better put, my politics align with many different issues, my advice is to do what you can, when you can. It’s so easy to go home, flop on the couch, and spout nonsense from your Twitter handle or [posting] to Facebook. Your efforts are better serviced volunteering at Planned Parenthood to walk patients to and from their cars. You efforts are better served reaching out to Homeless Action agencies in your area and seeing what people on the street really need donated. Your efforts are better served standing up for someone in the street, at a restaurant, on public transportation, or waiting in line who is being accosted for being black, a woman, a person wearing a hijab, someone who can speak another language, for being a trans or non-binary person who does not present well enough, for wearing the wrong type of political clothing, or for being at the wrong rally. Film the cops. Make friends with your neighbors. Tell your friends you love them.

Folks who remain strong enough to stand tall in a world so determined to drag you down.