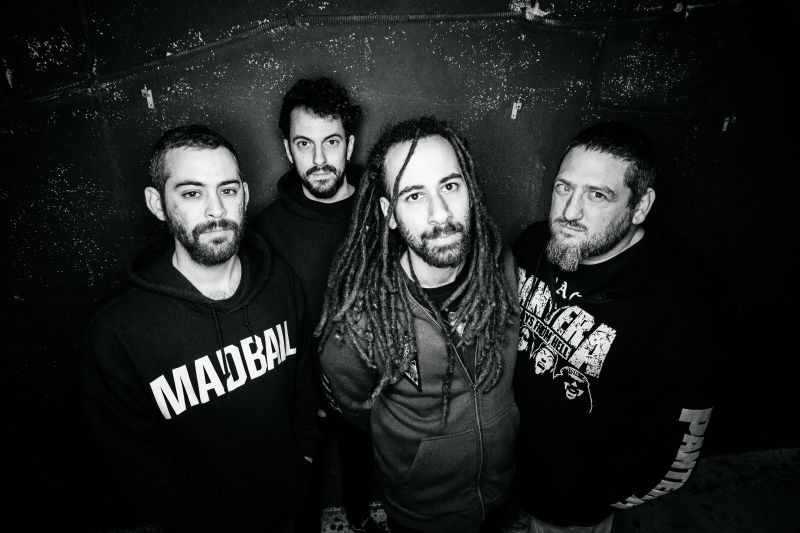 The members of Israel-located extreme metal/hardcore punk band Eternal Struggle grew up and still reside in a geographical region marred by continual conflict and division, but they haven’t let cultural, political, or religious corruption destroy their rebellious spirit and hope for a better future for all.

On Eternal Struggle’s upcoming album, the unfortunately aptly titled Year of the Gun, they decry human rights abuses at the hands of corrupt powers in government/the military, religious institutions, and more.

The band members all believe there are no winners in a war, and while they live in the ‘09’ district of Israel, they do not identify with nationalistic governmental policies that are detrimental to others.

They’ve organized inclusive local and collaborative shows, as well as fundraisers in support of women’s rights and refugees. They have condemned police/military brutality, racism, religious intolerance, and mandatory army drafts.

The band members have helped many in need by their humanitarian actions, as well as through their music’s relevant and hard-hitting lyrics, spreading awareness about inequality and deceit perpetuated by the powers-that-be.

In 2016 Eternal Struggle self-released their debut EP, Breaking & Entering, and since then they’ve been active on the live performance front. 2017 saw the band win a slot at Europe’s biggest heavy metal festival Wacken Open Air, and the following year they released the anthemic single “Falling Forward” via American hardcore music label Upstate Records.

Daniels brought NYC filmmaker Drew Stone (who has produced, directed, and filmed many music videos) on board and the full length was recorded in a speedy and intense two weeks.

The LP was later mixed and mastered by Tue Madsen (Sick Of It All, Meshuggah) in Denmark. And then, of course, the pandemic hit, and threw all plans out the window, as it did for so many of us.

Sadly, this interview was conducted in the midst of the escalation of horrific chaos, destruction, and death happening in the region right now…

Hi everyone! We’re a band from Tel-Aviv, Israel called Eternal Struggle. We’ve been active for a bit over 5 years or so. We’ve put out an EP independently back in 2016, a single in 2018, and we are currently preparing to release out debut full length record titled Year of the Gun (produced by Brian ‘Mitts’ Daniels (Madball, Skarhead)), which we signed to Demons Run Amok Entertainment and Upstate Records.

The music is an in-your-face combination of all of our influences, which resulted in something in-between extreme/hardcore and groove. It’s highly rhythmic, tone-heavy, constantly trying to out-challenge ourselves both technically and creatively, while delivering our signature imprint on metal and punk.

It often feels like the world is infested with issues. Man-made issues created by greed, ignorance and a self-righteousness us humans seem to gravitate towards. I think the answer to all issues would be through education, respectful discussions, practiced empathy and of course, personal accountability.

We could potentially [go into an] infinite list of issues locally here in Israel, as it goes on and on, but it’s really less about talking about them and [complaining], but doing something about it by recognizing what has happened, process the experience, consider its impact on the mind, body and soul, and find ways to move forward; to not dwell in the dark past but to rebuild, as best as possible, with a positive approach.

We partake in different types of fundraising music events that have donated to causes such as displaced refugee youth, women’s rights, animal abuse, and most recently, we contributed to ‘Standing Together,’ an independent grassroots movement of Jews and Arabs that promotes equality in Israeli society and leads multiple civil struggles against injustice within Israel. Here’s the link to that:

Our entire forthcoming album, Year of the Gun, tackles these very issues, ranging from issues with military control, religious agenda, corrupted leaders with a command-and-conquer mentality. Know your enemy, right?

The album comes out this summer, on June 4th to be exact, but meanwhile we’ve put out two tracks off the album. The first single, “Indoctrination,” acknowledges the IDF [Israel Defense Forces] and the pride they sell young girls and boys before drafting them into the army.

This way they have brainwashed soldiers who do not question the motive. As veterans, we’ve all been there, yet we have evolved and changed our perspectives and have broken free from that mentality. Pride kills - Everyone loses.

On our second album single, “On Broken Backs,” we aim at the 1%, trying to empower the masses into understanding that we are the majority and we simply can no longer remain silent and apathetic. We need to unite and strengthen one another, as there is nobody that is going to help us, if not each other.

Song quote from “On Broken Backs”

“COULDN’T EVEN TAKE THE BLAME, JUST PASSED IT ON, WHEN WILL YOU STAND BEHIND YOUR ACTIONS?”

"SPIT ON THE GROUND THAT YOU SWORE TO PROTECT WITH AN M-16 AND BIBLE IN HAND, OPEN UP YOUR EYES, LET IT ALL FADE, NO ONE HAS TO DIE FOR "SACRED" LAND!"

Song quote from “Manifesto/Point One”:
"EVEN WITH BROKEN BONES I'M SET TO FIGHT, ESCAPE WHERE I AM TRAPPED, RAISE MY HEAD AND SEEK THE LIGHT AGAINST ALL YOUR BELIEFS, YOU CAN'T CHANGE ME OR WHAT I AM!"

We would have to say FEVER 333. They hold back nothing. Their performances are as intense and revolutionary as they come, referring to them as demonstrations rather than gigs, or concerts. They have a very strong, important message and they still have a blast doing what they do and keep it fun, inclusive and anthemic. Spreading truth, PMA and radical inclusion. A truly inspirational bunch. Much love to the 333 gang!

Israel is about to have its 5th election within a year. Our prime minister has been hiding from taking accountability, and the protests have also taken place outside his Jerusalem residence, protesting and getting loud, with thousands of others that are pushing for a change in our government’s policies.

We’ve been in the streets standing up against the corruption, racism and police brutality. It’s almost a part of the way of life out here. To protest, to speak your mind, to question authority, to be disruptive. If there’s an opportunity to support our brothers and sisters, we’re all there.

The fact remains that we need to work together to ensure that positive change occurs. Name an action to take, or an organization that would be worthwhile to contribute to, for your cause.

Hate will always be a viral trend, unfortunately. The governments have the people brainwashed and turned against each other. This needs to end. The only thing we can and should do is to be nicer to each other. To find understanding and compassion for all people, no matter their personal beliefs. We’re all more alike than different.

We need be better role models for the youth of today and tomorrow. To have more compassion for those struggling. To be empathetic enough to recognize someone else’s struggle and offer them help, as well as finding the strength and humility to also reach out and ask for help. People would be surprised how much another person would go out of their way to help another. It’s in our nature.

A particular cause we’d like to address would be victims of PTSD (Post-Traumatic Stress Syndrome). Those invisible wounds that nobody sees. It lingers within us all, and some are completely crippled by it or completely lose their minds. It’s a truly devastating reality.

One in 12 soldiers report symptoms, yet struggle for recognition and access to help. Former prisoners of war, soldiers with combat stress reaction… We know of some cases from victims of terror losing their total sense of reality, leading them to madness, violence, and a loss of self-control. Horrific images, scents and sounds carried on well into their futures…

It’s rarely addressed and is both a local and worldwide dilemma. On that note, some great organizations worth funding are:

To name just a few…

People like yourselves who make it a priority to ask the questions that need to be answered. The people who are dedicated to spreading truth, knowledge, love and positive vibrations, keeping people on their toes, forcing people to do some critical thinking about how one could improve oneself to be a brighter light in a world of darkness.

Our music can be streamed/bought on pretty much all platforms. Bandcamp, Spotify, iTunes, Apple Music, Deezer. The album pre-orders are supposed to start next week so you can order our album from us directly via Bandcamp or physical copies via the record labels involved in this release: Demons Run Amok Entertainment (DE), Upstate Records (US), and Blood Blast Distribution (worldwide).

All the links to pre-order and pre-save Year of the Gun can be found here: linktr.ee/eternalstruggle