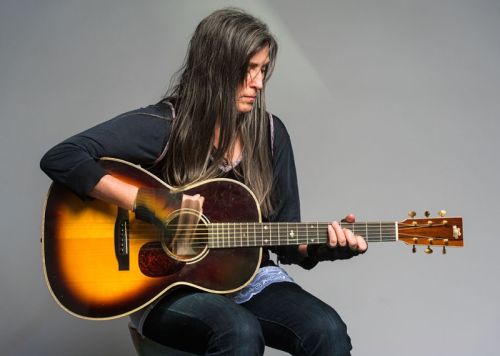 Vermont-based singer-songwriter, producer, recording engineer, and radio/podcast host Kristina Stykos, delivered a stark, potent, and lyrically relevant album, River of Light, via Thunder Ridge Records this past January and recently released a video for the strikingly direct and compelling track “Since You Asked” from the LP.

The folk-rock/Americana artist recorded the album in her own solar- and wind-powered studio and features Jackson Browne’s guitarist Val McCallum, as well as a bevy of her friends and session players.

Stykos has also produced around 30 records for other artists, doing it all in DIY, independent spirit. It’s that attitude and belief in freedom and expression that runs through her songs – and it’s the subject of her Protest Interview.

I’ve been writing songs my whole life, as a means to say things out loud that I can’t express any other way. Feelings can be a form of protest, and often are when there is abuse or neglect present. Where victims have been silenced, music can step in and create a safe zone or territory of honesty, unlike any other. My poetry springs from a place of honesty, and my voice gives that honesty wings. In my life I’ve had to fight to be heard, having grown up in a family that was misogynistic.  Early programming assured me I was inadequate and that led me to choose partners who reinforced my poor opinion of myself.

I am concerned about the current predominance of narcissists, sociopaths and psychopaths, in politics, as well as in our own homes. Unfortunately, the less corrupted forms of our human citizenry are having a hard time identifying this problem for what it is, and are still struggling with false equivalencies. Looking the beast straight in the eye, we can finally admit that lies and trickery are “no big deal” for those with these malignant personality disorders.

It’s time to activate our powers of discernment and call out the perpetrators. We are terrestrial beings with hearts and minds that do not need to be coddled by mass media and empty rhetoric. Rejecting propaganda on all fronts and letting our original voices out will allow us to tap our full potential.

Kristina Stykos – “Since You Asked”

I produce a radio show/podcast called “11th Hour Radio” which on the surface is just a meandering, edgy, somewhat comical conversation between two friends, but it subliminally touches on many issues we find ourselves struggling with in everyday life.

On the show, while poking fun at ourselves and our personal mishaps, we also bring to light the plight of the under-funded creative work force. It may be romantic to have 4 to 5 really cool part-time jobs and live on farms and eat organic, locally grown food, but the realities of managing self-sufficiency, for artists especially, is complex.

But where there is a will, there is a way, and certainly this podcast highlights some of the strategies we employ, to varying degrees of success, to make ends meet while at the same time making the world a better place, for ourselves and our children.

It's easy to judge and criticize others, especially in these unsettling times of overt intolerance, ignorance, and insults, but the fact remains that we need to work together. Working on a solution to the problems is critical in ensuring that positive change occurs. Name an action to take, or a campaign/charity that would be worthwhile to contribute to, for your cause.

I think it’s important to support community radio stations. Despite mass censorship occurring on larger platforms such as Google and Facebook, local stations are still largely uncensored. If and when the grid goes down, which seems fairly inevitable, we’ll need ways to pull together locally. Keeping independent radio in place will be critical to this effort.

I also encourage people to support individual activists who speak truth on YouTube or other platforms. There are many brave souls exposing the psychopathic world culture as it exists in politics, surveillance, mass brainwashing, the prison system, corporate agriculture, healthcare, and big pharma, etc… For starters, I can recommend:

When I’m tempted to get too hyper-focused on trying to figure out what is real and what is not, according to what I’m being fed by media, the simple practice of opening my heart to the next person who walks in the door works wonders.  I meet amazing people every day. As an Airbnb host, I’m often ambushed by total strangers, and with few exceptions, this brings back my awareness of how beautiful people are.

Humanity is not the problem. It’s more like humanity is being oppressed by belief systems that do not belong to us but that have been force-fed into the general population and supported by nefarious influences. This is a topic for another day.