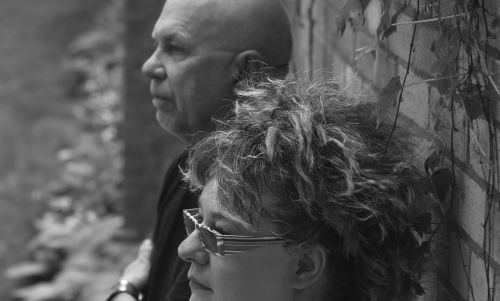 Canadian New Wave pioneers Rational Youth see the global connections that link us all together, for better or worse.

When the album originally came out, it was one of the first all synth-based pop albums to be released in Canada, and it proceeded to become one of the biggest-selling independent albums in that country. When the Berlin Wall fell in 1989, Rational Youth’s song “Dancing on the Berlin Wall” was re-released in Europe to great acclaim.

Rational Youth’s cult following has never faltered, and the band’s sharp view on history and culture continues to stand tall amid the societal animosity and political corruption that’s eating away at the world these days. In 2016 they released their Future Past Tense EP via Artoffact Records.

The band take part in our continuing Protest Interview series, pointedly commenting on authoritarian governments, climate change, and the positive power of our youth. This interview was conducted before the virus pandemic so the current global crisis is not addressed below.

We are Rational Youth, AKA Tracy and Gaenor Howe. We are a synthpop band from Canada that was founded in Montreal in 1981. We do all-electronic synth music based around pop song structures, with lyrics that we hope are meaningful for people.

Environmental collapse, income inequality, racism, violence against women, the oppression of indigenous people, the drift toward authoritarianism, and the debasement of the concept of objective reality and truth in public discourse (gas-lighting).

From our song “Western Man”:

He’s a man who knows the score, knows just what he’s fighting for

Shut the windows, bar the doors

If he gets his feelings hurt

Because you don’t appreciate his generosity

We recently participated (with 500,000 others) in the Montreal Climate March, at which Greta Thunberg spoke.

We are Canadian, but what happens in the USA obviously has a massive impact on the rest of us in this world. We see the USA as now teetering on a knife-edge between democracy and oligarchic authoritarianism. For those who are concerned about this, we can think of no better cause than this one [This was before Bernie Sanders bowed out of the presidential race]:

Young people today. They may just save us from ourselves.