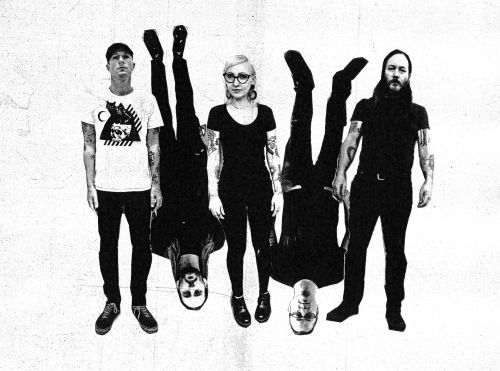 San Francisco-based punk/hardcore band Sub Dio just released a raw and exciting debut self-titled EP on July 19th via Side With Us and Underground Communique Records. The new band is made up of music scene veterans: Brian Moss (vocals, guitar), Danica Von Hartwig (vocals), Ryan Marsall (bass) of Great Apes, Shane Hendry (drums) of Reunions, and Danthrax (guitar) off Burial Year and Olehole. Danthrax took over from Rob Carter of Great Apes, who played guitar on the EP.

Moss has taken the time to reply to our socio-politically relevant Protest Interview. Read his astute replies and take a listen to Sub Dio’s kick-ass record below:

Sure - I'm Brian and I'm currently playing in Sub Dio and working on new solo material under the moniker Hanalei, a project I've done off and on for about two decades. Before Sub Dio, I played with Great Apes, Olehole, The Ghost, and a handful of other bands. When it comes to my ethos with music, I've always viewed creativity as a way to cathartically address my own internal conflicts and pain, as well as the countless injustices I see in our communities and society at large.

At this point in my life, I rarely write about myself. I'd much rather attempt to amplify the struggles of others or approach issues from perspectives that aren't my own.

I've been a public school educator for a long time and I see a strong connection between punk and teaching; it's idealistic, but I believe artists are also public servants. If what's being putting out there isn't meaningful and sincere, and aimed at fostering a better world, or at least opening up a dialogue, what the fuck is the point? And if we're addressing serious issues in art, it's our responsibility to back them up with action in our lives.

In terms of the Sub Dio EP, Danica's work in social justice law, her many years volunteering in San Quentin, and my work in education undoubtedly influenced the content. Lyrically we are addressing prison reform, reverse white flight, and the homogenization of once culturally diverse urban landscapes, the cycle of poverty as perpetuated by capitalism, violations of human rights on the southern border, mental illness, racism, sexual harassment and assault, and a complex system of vast inequalities posed under the guise of "equal opportunity." Real light stuff.

Right now, I'm scared shitless of the threat of environmental/climate collapse leading into a complete societal meltdown, but it's not something that's dealt with on the EP. The new Hanalei record I'm working on is centered entirely around those fears. Other issues that are constantly on my mind and will continue to influence my work include homophobia, transphobia, ableism, reproductive rights, and the devaluing of animal life.

Danica played a far more active role in these lyrics than I did, but “Credible Fear” and “Skeeters” are my two favorite tracks on the EP and certainly deal with the previously mentioned topics.

I view education, if done well, as a means of activism and protest. Additionally, listening, being open to personal change, showing up, being an ally, and going out of the way to kindle dialogue are all practices I strive for. Giving resources, time, and money whenever possible helps, too.

As for charities, there are so many good ones out there. I’ve recently thrown some love to Raices, Planned Parenthood, the NAACP, and the ACLU. For direct involvement, folks should be volunteering, putting themselves on the line, and backing up and standing up for any marginalized group to take some of the burden off their shoulders. Sharing thoughts, knowledge, art, and experiences also can start conversations and bring on change. It's also so important in our current climate to listen, learn, research, reflect, and consider new perspectives.

I've loved John Samson's work for decades. His lyricism and writing in general deserves the highest of praise. The manner in which he approaches politics and suffering always feels personal, emotive, and intrinsically human, rather than being overly direct or stating the obvious.

Some of the kids I encounter as an educator as well as youth across the globe creating, loving, progressing, and being far more aware and active than previous generations provide inspiration and optimism for me. In a broader sense, anyone that puts another person or group before their own personal interests or needs is a source of hope for humanity.

Reinvention to the Front: An Interview with Jonny Couch