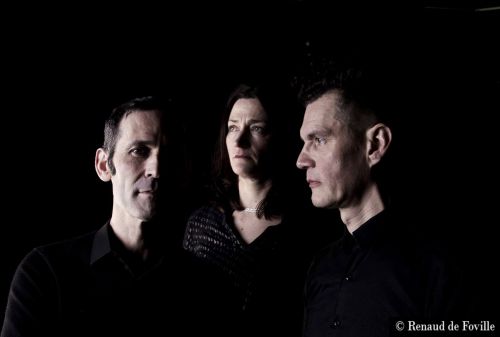 The founder of French post-punk/rock band Versari calls out police violence in France – and the US.

Post-punk/alternative rock band Versari may hail from France, but their dark and atmospheric sound needs no translation.

Versari was formed by Jean-Charles Versari (guitar, synths, vocals) and is inspired by the French songwriting style called ‘chanson’, where the meaning of the lyrics is just as important as the sound.

Jean-Charles Versari took some time out of his schedule to answer our ongoing Protest Interview series. He focuses on the scourge of police violence and on presidents who think they’re kings – in France as well as the US.

Hi. I am Jean-Charles from the band Versari, in which I sing and play guitars. I am also a music producer. The three members of the band live in France, but in different cities. I live in Paris.

Versari took a bit of time to settle: We released a first album which was a kind of in-between one. Laureline, who currently plays bass and does backing vocals, joined after the first album was released.

We understood where we exactly wanted to go then. Post-punk, post-hardcore, and New Wave hold an important place in our musical culture, so we naturally roamed in these directions – with my [writing] lyrics in French, even though I am bilingual (I lived in the US as a teen). I have a more in-depth understanding of my mother tongue and can express my feelings more accurately with it.

Our musical vision is not to reproduce what has already been done in the past, and even if our sound is reminds of [past] eras, I do feel we are creating something very new.

Ha ! That is indeed quite a big and open question. Our recently elected president has been the most concerning matter for us, I think. Coming across as a ‘centrist’ candidate (which didn't fool any of us), he turned out to be royalty re-incarnated. Very far right, linked to national front religious figures, he is a socially violent extremist. He hates the people, and he is sold to big corporations – after all, he comes from corporate banking and specialized in ‘tax optimization’, which is legal tax evasion.

Police violence has sky-rocketed since he's in power, the rich got massively richer, and the poor got way poorer. Of course the pandemic made it worse… Well, he didn't deal with it and lied about masks, medicine, etc...  Maybe all this reminds you of something [or someone taking advantage of his power/position in the US], so you might understand how we feel...

My problem is I don't actually really know what to do. It's hard to find your place when getting involved in politics... But I am thinking about it, talking about it a lot with groups of friends. We do go to protests – although it is now life-threatening with police violence.

Of course I have followed everything that has happened with the George Floyd murder, and understand very well where America is at these days. I feel for the African-American community. We are in the same place here, really...

I always have a hard time writing songs about political topics. The ones that fit this the most is “Non-Retour” on Ostinato. I think there is a real hypocrisy in France, because the people beheaded the king, but that signaled the rising of aristocracy, which is a power that is way more diffused and which you can't really behead. The most obvious part goes:

“There's no appeal, there is no doubt

Although the kings are beheaded
There is still one question you have to ask yourself:
How do we behead the market?”

There is a song I love, by The Evens, that has been in my head for months – before the George Floyd murder – because we have been living with police violence for a very long time and it has been peaking hard in the past 15 years, to come to a point of no return with this new presidency. It is “Mt. Pleasant Isn't” and the lyrics go:

As I have said earlier, I still go to public protests, and try to gather and organize thoughts and ideas on what we could do. And I always voted. But all this is not enough anymore (especially voting).

I absolutely agree with that. I think the solution will come from the gathering of like-minded people. It is hard though to have everyone agree on one direction. I can't really name an action to take...

One thing that has been really concerning here is the fact that justice is not justice for everyone anymore. Going back to police violence, every trial that has been set up to try to get the officers accused somehow has been ending in nothing. Officers walk free and people live the rest of their lives mutilated, or are dead. But again... What to do about it?

I think Amnesty International is doing a great job.

I have to say I am worried so, ‘hope’ might be a tad too much. But the kids around me, and my own son, have a quite clear vision of inequities. I am trying to raise him to be a good person, and it seems to work. And I feel like all the parents I know, and the kids I see, are in the same place. I also feel the people are absolutely fed up with all the crap the Western world has fed them over time, so things might change...