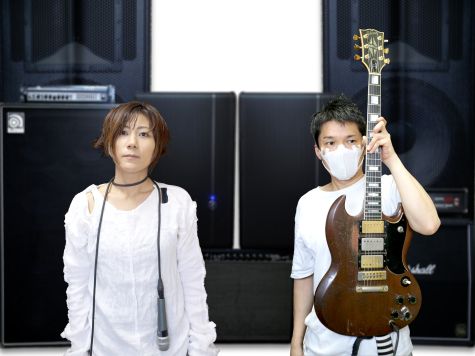 Yako and Agata of the highly admired Japanese band go into the process behind their wild(ly enjoyable) music.

Hello Yako and Agata!  It’s such a thrill to have the chance to catch up with the both of you and see how things are going soon after the release of your 10th album fetch. What are you involved in at the moment?  I think you’ve finished up a tour of the U.S. recently.  How did that go?

Agata: We just got back to Japan a few days ago and are having a rest now. I still feel the jet lag.

Yako: Our tour went very well, and we had a good time. We were kind of worried about this tour because it was the first time for us to tour with this 2-piece line-up and we were not sure if people would accept our new style. But the audience seemed to enjoy our shows and we found people were much more open-minded.

I’m kvelling over your super-fantastic album and I can’t believe how intense your songs are and how quickly the song structures change.  What is your creative process?  Do compositions come to your minds in a dream state or do you hash out sonic progressions during rehearsals?

Agata: When I create the arrangements, I have some particular image in my brain, but mostly small ideas come first and then I start writing music from there. We put things together again and again and sometimes we play those demo versions during rehearsals or at the show.

Yako: We don't jam in the studio to write new music, but now I think it might be fun to do that as a two-piece line-up in the future.

I first heard your music back in 2004 or 2005 and I was blown away then, as I am now, by your blinding speed on vocals, guitar, and, well, everything!  What is the driving force behind your decision to play at a break-neck pace?  Is it because you have a love of speed-metal bands, or are extreme caffeine consumers, or because you think life’s too short and you want to make the most of it?  Or maybe it’s all – or none – of the above?

Yako: We are not trying to make fast music, and compared to very fast bands like grind core or hard core, we are not that fast. We just play music with a tempo that we feel is comfortable and fun.

Agata: When I was in high school, I was sometimes listening to 33rpm records at 45 rpm just for fun.

You’ve been a duo since the summer of 2012.  Are you the only ones who worked on fetch?  What was it like to include drum programming on the album instead of having a human drummer?

Yako: Yes, the two of us are the only people who worked on fetch, except for a mastering engineer.

Agata: We usually write and record by ourselves. We bring our own equipment to the studio, so there is no recording engineer. Anyone can do the same thing as we do for the recording. You only need one computer, an audio interface, recording and mixing software, and some music software for drums, bass, and synth.

Agata: Working with a human drummer is always a lot easier for writing music, if the drummer is good. Programming drums or bass guitar takes a lot of takes. I programmed the bass guitar listening to the tracks I actually played and recorded in the demo version and it was kind of more difficult than programming drums.

Yako: We programmed bass guitar because we can change or fix it easily later.

Yako, how difficult is it for you to sing-shout and scream your lyrics out?  How do you maintain your voice during a show without shredding your vocal cords?

Yako: Once, I almost strained my vocal cords when we toured the U.S. It was a tightly scheduled tour, and we didn't have a day off in about 2 months. After that, we now try to take one day off a week on tour, and I am doing OK these days. Well, still, often I lose my voice. I try to sleep a lot and eat many candies!

Agata, what types of guitars did you use on the album, and particularly on the menacing-vibed “Red Data, Red Stage”, the bagpipe-sounding frequencies on “Zero+” and “Zero”, and that brief, swingin’ mosh pit break in “Lie Lied Lies”?

Agata: I used 3 guitars. All are SG guitars. Two are Gibson and one is Greco. I used the Greco for demos and I was going to replace it later, but I kept some of passages after all because the Greco sounded better than Gibson for some parts. The Greco guitar was used mostly for short guitar loops, like “Zero+”, “Zero”, and others. I used only Gibson SG for “Red Data”, “Red Stage”, and “Lie Lied Lies”.

What kind of electronics are you using to get those asteroid-blasting laser and R2-D2-like sounds on “Candy Gun” and “My Missing Link”?

Agata: R2-D2-like sounds came from a lot of cut and paste and time stretch, plus pitch change of some synth sounds.

For all of your blistering freak-outs, there are also some quieter passages on this album, like at the start of “Candy Gun” and on “Zero+” where there is an unexpected break of chirping crickets (or maybe it’s frogs?  I just read at SPIN online that it’s frogs!) at the end of the song.  What is your reason for incorporating these more contemplative segments?

Yako: I like the sound of waves and, actually, we used it in a song called “Type: Ecco System” on Bambi's Dilemma too.

Agata: Nobody understands this, but I'm imitating wave sounds with guitar in the intro of “Candy Gun”.

Yako: We usually don't have much of a reason behind why we pick up certain sounds or ideas. It just fits the feeling we are trying to project.

Are both of you as frantic “off-record” as you are on your albums?  Or are you both calm, cool, and collected in person?

Yako: I think both of us are pretty normal. We have met many people who play music and most of them were nice and pleasant.

Agata: It is difficult to be crazy for a long time playing music, especially if you are in a touring band.

Yako, it’s difficult to discern your lyrics most of the time, but some do stand out, like the line “I’m still here – I’m still lost / on this dear f*cking planet” from “Lefty Dog (run, caper, run), “…make a wish…” from album opener “Candy Gun”, and “…to start to sing about love.” from “Schemes of the Tails”.  Are you always exclaiming in English or is there some Japanese mixed in there as well?  Is there a central lyrical theme that runs through this album; maybe about loss and rebuilding?

Yako: All of the lyrics are in English. When I started the band, I was singing in Japanese, but I thought English would fit my vocal style more according to pronunciation or sounds, so I started singing in English.  I usually don’t decide on a certain theme when I write lyrics for albums. I just write what I feel and think and see around me. I guess there are some ideas of "loss and rebuilding" that you say on fetch.  After that big earthquake, I had so many thoughts about many things. I think it depends on the people who read my lyrics to see the themes or meanings in my lyrics, and it is better to leave free space for the readers’ interpretations.

What is it like living in Tokyo?  It seems like a fascinating city, very (post-)modern and with the light switch always on. Have you always lived there?  What are you favorite places to visit and things to do?

Agata: I moved to Tokyo from Osaka when I was 18. It's a fascinating place, but if you don't know what you want to do, time does fly really fast here before you actually even do something. That's my impression about Tokyo.

Yako: I have been living in Tokyo since I was born, and I have not lived in any other places. I have no idea what it is like living in other town, and I guess I am satisfied living here. But I always feel there are too many people in Tokyo.

Why did you name your band Melt-Banana?  It because you’re melting your listeners’ minds and/or is there a connection to the The Velvet Underground & Nico album artwork and aesthetic?

Yako: Yes, the word "banana" came from that banana from Velvet Underground & Nico. I wanted to have a name which has something "pop", and then Agata said "banana", thinking of pop art by Andy Warhol. Then the word "melt" was in my brain, so I named the band "Melt-Banana". Actually, it was when I was thinking about song titles and we used it for a band name later.

Agata: In the car on the way to Chicago during this U.S. tour, we found out that Mr. Lou Reed had passed away. It was very, very sad news.

What are you favorite rock records that make you want to kick out the jams?  I’m into your album, Influenza by post-rock French band 1984, Three Cheers for Sweet Revenge by My Chemical Romance, Box of Secrets by Blood Red Shoes, and my all-time fave kick-ass album Appetite For Destruction by Guns ‘N Roses. 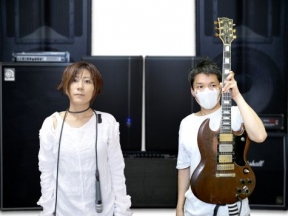