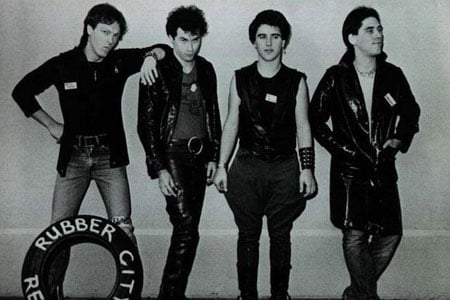 Hailing from Akron, Ohio, home to the huge tire industry (hence the name “Rubber City”) came a tight knit rock band that oozed attitude, rebellion and plain old reckless abandon. The Rubber City Rebels piloted the punk plane and DIY spirit and took matters into their own hands. They created one of the first punk venues in Akron, gave DEVO their big break and the took a chance and help develop the L.A. punk underground by relocating to Los Angeles in the late ‘70s. They released some hard to find seven inches and then released a critically acclaimed full length that really didn’t prosper commercially. Now close to 25 years later, The Rubber City Rebels do it to us again with possibly the best album of the new century “Pierce My Brain”, a hard rocking soon to be punk classic that once agin sets the standard for what great rock n’ roll is about. I did manage to catch up with Rod Firestone (vocals) and Buzz Clic (guitar) long enough to get an inside look into their madness. Here’s how it went.

My first question is “why ya took so damn long to come out with another
full length”?

Rod: We’ll, we influenced so many bands like Nirvana, Turbo Negro, Green Day etc… that we felt we didn’t want to come back and use up all the oxygen. We let these other bands take root first as our way giving something back. In the mean time we controlled everything from behind the scenes. If you only knew…

Akron not being too far from Cleveland, was that mid ‘70s scene over there an influence on your style? Other than the Deadboys, you guys were more on the rock side than the Electric Eels, Pere Ubu and such. They were kinda in tune with the artier New York contingent; you guys had that Ramones/Deadboy aesthetic of rock n’ roll.

Rod : They influenced us alright. The same way a crucifix influences
Dracula.

Buzz: I hate that art-rock crap, I won’t openly insult any of the players,
just know this…all art rock and every tributary that leads to and from the
genre…must die!

In the ‘80’s, you made the move to Los Angeles. Looking back, was that a good idea or one that didn’t pan out the way you expected?

Buzz: after all this time…there’s still no snow in L.A. (last time I checked)

Rod: That’s right Buzz, the reason we went to California and not New York
was that it was December ‘76 and it had not gotten above 0 degrees in thirty days straight. Buzz was bitchin’ about the weather in Stockholm when we toured there last February, but he’s forgetting we grew up with a lot worse in Akron.

Other than the weather. LA was the only slightly better than Akron. The
girls are all models and movie stars. There is hot and cold running drugs
and 80 thousand record companies with billions of dollars to waste and the best junk food in the world. But there is no freshwater fishing.

You did come out with a critically acclaimed album, that no one seemed to hear. What do you think attributed to that?

Buzz: Well, it wasn’t our job to put the records in the stores was it?

Rod: Right again Buzz, There’s more to making hit’s than good bands and
great songs. The album cover had too much blue I think. Besides, no one told Buzz you can only fuck your way to the top if your a woman.

Now it’s 2003. New record, new label. Could you elaborate on the new Rubber City Rebels? Who’s involved and what not. I heard it was done in two different states.

Buzz: the “new” Rebels??? hey look around, it’s us, the same guys…my
brother Bob has always been around helping out, so he’s no newbee to the Rebels camp. The recording was done in Ca. and N.C. it was a miricle of modern technology. We are saving the details of the actual recording for our “Making of” video and Rod and I are featured speakers in “Band-ology” we know everything that’s gonna happen to every band BEFORE it happens…just ask us….

Rod: Yeah, we’re the same band, same sound, a little time passed but none of us joined mahuvishu orchestra or anything. Many folks have said our new album is so cool because it’s like we pick up where we left off. It’s harder, faster and stoopider without sounding like were desperate to be young sounding. It’s just us baby. We only know one way to rock. And by the way so is our live show, so don’t miss it.

The details of producing Pierce My Brain are as follows:

We we’re touring in LA and a gig got canceled so we went to the rehearsal studio and laid down some basics for four songs on ADAT. Then we all split to our respective cities, LA, SF, ATL and Chapel Hill, NC. Buzz finished up the guitar work and then sent me the tapes in NC. I put the vocals on and did a mix. So then we had this bitchin’ demo. Talk, Talk, Pinhead and the one you like so much- “Your Television Lies”. Lies was just a jam and I wrote the lyrics back home. Buzz never even heard the song till he got the mixes.

We shopped the tape to Gearhead and Smog Veil and others as a single. Frank Mauceri came down to see us at the Gearhead festival in Austin and suggested we do a whole fucking album.

So then we all went back to Cali and did 11 more basic tracks at a bitchin
24 track studio with a ‘70s era 64 channel SSL board with automated faders. That’s like the coolest console ever made. Trust me. We did all this in three days. Frank Meyers from the Streetwalking Cheetahs came down and contributed too.

Again we all split up and Buzz finished the guitars and sent me the tracks
on CD and I did the vocals in NC. Then I flew back to LA and Buzz and I did the mIx. We transferred the vocals back to the 24 track and mixed on the SSL. Then we sent the tapes to Frank and he flipped. I mastered the album in NC.  And another note of interest, Bob Richey of Eldo Art and from the Pagans did the Album Cover.

I love that new song “Your Television Lies.” Share with us what it is about
and who or what influenced you guys writing that one. I think that would be a great song for Metallica to cover. It’s heavy.

Buzz: Metallica? I believe if you check…they have used acoustic guitars on
their records..that disqualifies them from using that or any Rebels
song…we watch entirely too much TV…(final answer)

Rod: I took my share of the Tire fortune and Buzz and I built a company
called Mind Control Labs. The Record Label being the “Youth Division”. Since the 70s we’ve been studying various techniques of Mind Control. The song “Your Television Lies” is like a punk musical brochure for the company. Plus it’s way sending you messages dude. Metallica! Those twerpy little misers, “You’re ripping me off, we need more money!!! the RIAA is your friend.” Don’t even think about them covering our songs. Hey wait a minute… we’d be rich if they did that. But then all the kids would download the song and I’d never get paid anyway. Right?

Are there any plans for a full scale tour in support of this new album?
Buzz: I am willing to commit years of my life in devoted service to all the fans…and the good lord willin’ ...they’ll provide multiple sexual encounters along the way..

Rod: We are under contract for 5 years to Frank “The Cherry” Mauceri. If he says we tour, we tour. We just toured Europe and had a good experience. We played Belgium, Denmark, Norway, Sweden, and Germany. We are going back to tour Spain and the rest of Europe later on. Look for us to tour the US this summer all over.  And don’t miss it. The show is no fucking around. Ask any one who’s seen us. We just opened a show for the Dictators in Cleveland and killed.

You’ve influenced a lot of punk rock n’ roll bands like The Candy Snatchers, Electric Frankenstien and such, what are your thoughts on being so influential on this new crop of rock n’ rollers?

Rod: Truthfully I never saw that one coming. But then all my big influences we’re kinda obscure too. So why not. By the way on Turbo Negro’s new album “Scandinavian Leather” there is a song called “I Want It All”. Euroboy (Turbonegro guitar player) told me he stole the riff from Rubber City Rebels for that one. Mind Control, Baby!

How did you guys hook up with Smog Veil records? I heard there is an Electric Eels connection.

Rod: You mean the album cover? I thought that was the Pagans. Anyway, Russ Cerny is our merch guy. Kinda like our Arturo Vega (The Ramones long time art and merch guy). He told me to contact Frank at Smog Veil ‘cause he was all Cleveland, all the time. Anyway Frank is awesome, the label is awesome. Better than Capital, or Sire or any of those fuckers. I was kinda surprised when he asked me “Where is Rubber City?”. When I told him it was Cleveland he said, “Oh yeah. I forgot.” So we
did the deal ‘cause he thinks we’re from Cleveland.

Which is the tougher city: Akron, Cleveland, or Toledo?

Buzz: Anyone from Akron can kick anyone from Cleveland’s ass…and Toledo is too far out in bum-fuck-ville for me to comment on.

What the hell ever happened to the Pagans? Do you guys have any contact with those guys?

Rod: Only on the solstice when we burn the wicker man and sacrifice the
virgins to the Earth Mother’s moonchild.

What does the future hold for the Rubber City Rebels?

Buzz: we are gonna rock’em until we’re dead…and then eat the babies..
Rod: Buzz, you put it so well. We will record another record, we will tour,
we will update the website and we will influence another generation of
losers.

The Future Used to Be Better: An Interview with T.V. Smith