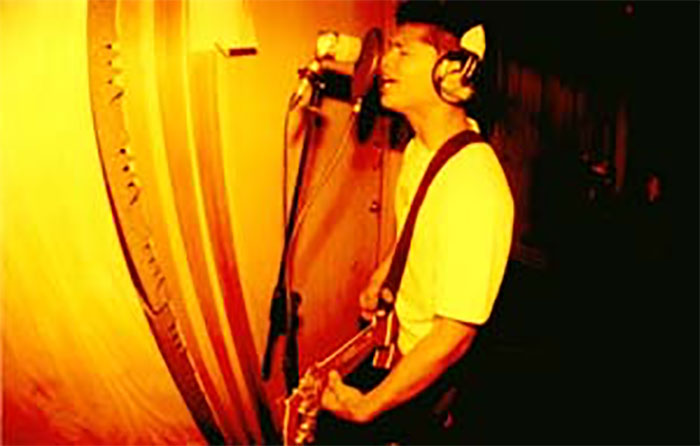 Q: How did an all-star ska rhythm section find its punk rock roots?
A: It entered Step Thirteen.

Dodge: Step Thirteen is about the 12-Step Program.  A lot of people in 12-Step Programs take advantage of the people they’re supposed to be helping.  It’s a sad thing.  People who have been in the program before, and have been clean and through the ropes already, will prey upon the emotional needs of others who are new to the program.  Their motives for doing this always involves sex…

When did Step Thirteen originate?

Dodge: Step Thirteen started in the Fall of 1992.  The original Step Thirteen lasted for about a year and a half, and we were in hiatus until we started up again in 1996.

Dodge: We played at the Coconut Teaszer a lot.  Club Lingerie.  Raji’s, before the earthquake in ‘94.  The Palomino, which is no longer around.  One of the highlights came at Club Lingerie in ‘93.  I was standing there singing and I saw Anthony Kiedis right in front of me.  I was like holding myself back going, “Fuck, that’s Anthony Kiedis!”

Why did the old Step Thirteen break up?

Dodge: The reason why we broke up was because of a girl.  Hey, I wasn’t involved!

Dodge, even though you’re the only original member left, Step Thirteen isn’t your first band.

Dodge: The first band I ever played in was called YAPO.  It was an acronym for “Young And Pissed-Off.”  That pretty much says it all.  I was fourteen when I played with them, and they are still around.

Pat, you’ve been in Step Thirteen since it reformed in 1996.  When did you originally hook up with Dodge?

Pat: I moved to L.A. from New Jersey in ‘91, and that’s when I met Dodge.  We were in another band together called Jeff’s Parents.

OK.  These questions are for Steve and Rodney.  You both used to be in successful ska bands before you joined Step Thirteen.  Steve, you’re first.  You used to be the drummer for Buck-O-Nine.  Why did you leave?

Steve: I left Buck-O-Nine because my priorities changed and being in the band didn’t feel right anymore.  I gave Buck-O-Nine six months notice to find a replacement.  When they found someone else, it was like, alright, I guess I played my last show, and that was that.  There weren’t any hard feelings when I left, and I’m still really good friends with everyone in Buck-O-Nine.

Was getting married one of the reasons why you left Buck-O-Nine?  Was that one of the priorities you were talking about?

Steve: I decided, fuck, I’d rather get married right now than keep playing in this band.  It was a personal decision.  When you get to that point, it just makes sense.

Buck-O-Nine songs have been played on KROQ, Beverly Hills 90210, and The Howard Stern Show.  Where did you perform when you were with Buck-O-Nine?

Steve: We played in Japan a couple of times.  We did some shows in Hawaii.  We went to Alaska and toured all through Canada.  I’ve been around the U.S. a dozen times.  For some reason, we never went to Europe.  Every other band in the universe seems to go over there, but somehow, we couldn’t hook it up. The whole Europe thing eluded us.  It’s really bizarre.

Rodney, you used to play bass in Filibuster.  Filibuster hasn’t gotten as much airplay or exposure as Buck-O-Nine, but they seem to be doing alright.  I know that the band regularly tours Europe with the Skatalites.  They also recently recorded an album with Steve Albini (Pixies, Nirvana, Bush) in Chicago.  Why did you leave Filibuster?  Did you leave Filibuster on good terms like Steve did with Buck-O-Nine?

Rodney: I’m not on good terms with anybody in the band, actually.  Our goals, at the time, seemed to be different.  When I was in Filibuster, nobody wanted to work.  They would rather drink their beer and smoke their pot and go on their way.

Were you still with Filibuster when they went to Europe?  Did you meet the Skatalites?

Rodney: No, I didn’t go to Europe.  I left Filibuster in ‘96, right before they signed with Skunk Records.  When I was with the band, we went to Arizona, Nevada, and toured up and down the West Coast from Tijuana to Washington State.  Every time Filibuster went on the road, we literally starved.

Here comes the big question.  Rodney and Steve, why did you join Step Thirteen?

Steve: We’re totally in the same boat about why we joined.

Rodney: We both left ska bands and don’t want to play ska anymore.  We wanted to go back to our roots.  Growing up, the two of us were skaters and into the punk scene.  We now want to be able to play whatever we feel like playing without being classified or confined to one genre of music.

Rodney, I know a bass player who has been running around town, trying out for the Long Beach Dub Allstars and the Aquabats.  Shouldn’t you be looking for a big paycheck?

Rodney: I’ve played shows for five, ten thousand people.  But, some of my favorite shows have been in front of ten people.  Those ten people, though, are the ones who genuinely love music and are there to groove.  That’s why I play music.

Step Thirteen is a pretty traditional four piece rock band.  The ska bands that you two used to be in had a lot more members.  Does having less members make a difference?

Steve: Buck-O-Nine has seven members, and we would go on tour with eight or nine guys.  Filibuster is even bigger.  I would never join another band with more than five members, max.  I’m not saying its bad to have a lot of members, but it’s less people to coordinate and get along with.

Rodney: Step Thirteen is more intimate.  When you have twelve people in a band, it’s hard to get close to every single member, you know?

A lot of people, especially here in Los Angeles, try to create “scenes.”  Step Thirteen’s website is on sgvpunk.com.  Is Step Thirteen part of a “San Gabriel Valley Scene” or anything like that?

Dodge: I don’t think so.  If we were in another city in California like Sacramento or San Diego, maybe we would fit in a clique.  Right now, in L.A., there are too many different music scenes going on for me to classify us as being part of one.

How would you describe Step Thirteen’s music?

Dodge: I would just classify our music as “rock.”  There are elements of punk in it, and when you listen to the music, you can tell that we’ve all been into punk at one point in our lives.

Steve: The older songs are 2/4 punk, but the newer ones are straight-up rock based.

Has Step Thirteen’s music changed since Rodney and Steve joined the band?

Pat: We’ve always had a set of songs that we’ve played with all the different line-ups, but even the older songs are different now that Steve and Rodney have joined the band.  Basically, we’ve rewritten everything.

Step Thirteen was in the studio recently with Mitch Rellas, right?

Dodge: We worked with Mitch on six songs.  Mitch has engineered a lot of thrash metal bands, and he’s also worked with Portable and Laurence Tolhurst, who used to play drums and keyboards with The Cure.

Steve, you created Step Thirteen’s skull logo.  Didn’t you also do a lot of Buck-O-Nine’s artwork, too?

Steve: I did a couple of Buck-O-Nine’s album covers and logos, and all their T-shirts and merch.  I went to school for graphic design, and I’ve been into art my whole life.  So, if you need a logo or anything, call me.

Hey Pat, you’re Step Thirteen’s guitar hero.  How long have you been playing and who are your influences?

Pat:  I’ve been playing guitar since I was twelve or thirteen.  I took lessons for four or five years off and on, but I learned mostly by listening to records and playing along to them.  The Descendents are one of my favorite bands.  I like No Doubt and Lush, too.  I like the blues.  I like a lot of dub and seventies reggae bands like Burning Spear and Black Uhuru.  As far as guitar players, I like Jimi Hendrix and also Robert Smith from The Cure.  And there’s this jazz guitar player from New Jersey called Hal Sparrow, I think.  He was pretty popular and he lived next door to me while I was growing up.

Dodge, when you perform,  you talk a lot of shit to the audience between songs.  What’s up with that?

Dodge:  I’ll quote Madonna on this one.  I remember seeing her on MTV when she was blowing up as a big star, and she said that the only person she was concerned about was the person who gets up and walks away.  I put everything emotionally and physically into our music when I’m onstage, and when someone walks away or doesn’t pay attention, I get offended.  I want people to like us, and I want to know why they’re walking away.  I’m learning, though, that if they don’t like our music, I can’t make it my problem like I have been lately.

Has Madonna always been a big influence on Step Thirteen?

What about Mike Ness?  I know Social Distortion has been a big influence on you.

Dodge: I know a lot of people who look at Mike Ness and identify with him so much that they go, “that’s me, that’s me right there!”  He’s the guy who went through all the drug problems, got clean, and is still into punk rock.  He’s almost forty years old, and he can still do it.

So, I guess Mike Ness would understand what Step Thirteen is all about then, huh?  I don’t have any more questions.  Is there anything else you would like to say?