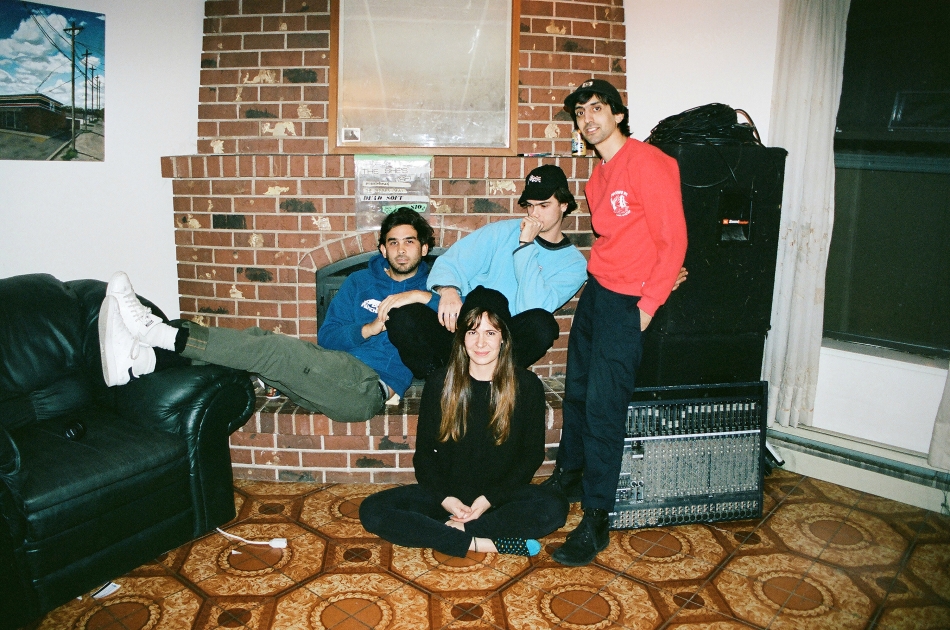 Embedded in the DIY culture and nightlife in Vancouver, BC, post punk act Dumb offer more than a simple and superficial persona. Entering their fourth year since the band’s inception, the quartet are set to release their second full length, Club Nites, off local label Mint Records on June 7th on cassette, CD and vinyl. Formed in a tight knit community, Dumb self-released three records before establishing their relationship with Mint and the label’s co-founder, Randy Iwata. A prevalent and constant supporter of burgeoning bands based in of Vancouver, Iwata literally purchases every DIY act’s music via Bandcamp and has established an annual festival highlighting bands primarily out of the Vancouver and British Columbia area.

Unravelling another 14 tracks one year apart from their initial debut, Seeing Green, their upcoming record adheres to their joint pop sensibilities and effortless lo-fi frenetic punk leanings while maintaining themes of restlessness and neuroticism in a subjective reality. “The last album was all about this weird character that’s stuck in trying to get by and make money. They’re greedy and envious and they’re asking everyone else for help. This one is more about us trying to negate the spectacle, so to speak”, states guitarist and vocalist Franco Rossino over a phone interview. Drawing on personal experiences from the bar and club scene in the city, Rossino remains fully immersed in the lifestyle as he works various jobs at Red Gate, a DIY space playing a constant balancing act, teetering on the brink of keeping their doors open and the business afloat. When asked about the inspiration for the record, he comments that “It’s basically about living in a larger community that likes to party. I’m always at [Red Gate] or at another club or bar and I see the same 300 to 500 people every weekend.” Rossino’s observations on the constant bombardment of activity, whether through major cities’ clubbing tendencies or even through the aggressive ingrained aspects of social media, can eventually make one completely desensitized to their actions and thought processes. “Everyone has these perceptions of who you are and what you can do for them”, playing out as an eventually tedious game that people get swallowed into. Without taking themselves too seriously, Dumb’s lyrics in tracks such as “Content Jungle” still offer multiple layers on the nature of this cycle, giving slight nods and references into the subjectivity of truth and cognizance.

Prior to the initiation of Dumb, Rossino comments on their close-knit friendship and the bandmates’ affinity and love for live shows, similar musical taste and recordings. When asked how they conjured their band name, Nick Short, their guitarist, came up with Dumb since he always wanted to play in a band under that moniker as well as playing in a project called Swim Team. “Now he’s in both. It's like his childhood dream or something”, Rossino laughs. For those of you in Vancouver you can attend their record release party at Red Gate on June 16th. They will also be embarking on a North American tour for the remainder of June and July, followed by a European tour taking place in October. More tour details announced here.