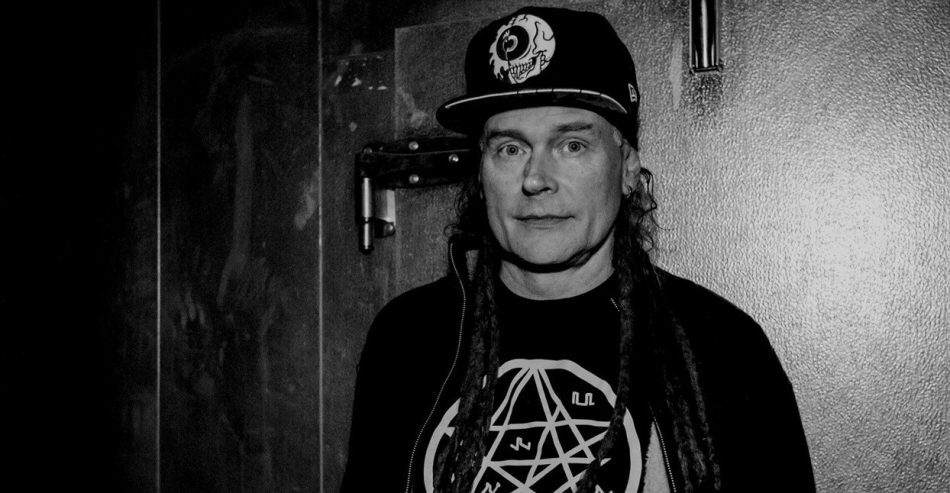 The LP was written and produced by Key, recorded at Subconscious Studios in his hometown of Vancouver, Canada, and mastered by Greg Reely.

Over the past four decades, Key has been one of the pioneers in the industrial music field, through Skinny Puppy his solo work, and a multitude of other projects.

Key gives some details about Resonance, relating, “It's a statement based on many life experiences. It's probably the closest I've felt to making an 'old school'-style album, as far as just working alone and zeroing in on what means something to me. I guess they say you make music for yourself first. So in some ways this album may be my most personal."

Resonance was also inspired by the true story of Xwayxway, a mostly forgotten-to-history indigenous village located in what is now called Stanley Park in Vancouver.

kEvin Key expands upon these themes in his Protest Interview below, while also bemoaning the lack of empathy and understanding in humanity.

Hello! Please introduce yourself and give a brief description of your sound/musical vision.

cEvin Key, electronic musician. I explore worlds that are created by sound.

I'm mostly now affected by the loss of some great people in my life. Partners seem to die quickly. I've lost three musical partners to untimely death and I think for the better part of my experience this has set the tone for most of my work.

Honestly, I wish I could know what it's like to feel less "intense" feelings of loss. It's my biggest challenge with being creative. With the world closed down now it even becomes magnified by being alone most of the time. Travel or cultural adventures could somehow detract and inspire, and that is something I'm looking forward to in a future non-COVID-based environment.

What song, video, or lyrics quote of yours best represents your current viewpoint on this important topic?

Well, for me it's mostly based around sound and evoking emotion. A direction that somehow ties into the feelings. Doesn't mean it's a sad place. There is a lot of optimism. Actually my album Resonance was a lot about the discovery of something you never knew, but you had strong sensations about, only to then learn your hunches had some substance. This can be applied all over the place, but for me it was an eye-opening experience.

Well, I could become more specific and say that losing a musical partner is something I don't find expressed in other places, but my own heart. It's a very alone feeling because you can see that others are moving forward and many times it's noticing how many are not overwhelmed with thought or the feeling that things have fallen away so much that you are looking to others for inspiration on how to climb out of the turmoil.

It's important to stay mindful and try and see these feelings as patterns that shift and change. I think working with Chris Corner on this album on the song "Anger Is an Acid" really touched an emotional spot I could have never expressed alone. So I'll thank Chris for that.

What other ways, besides through your music, are you involved with to get your message across?

My message is an inner message and not one that's been based around getting my message out. I've always said that music can be a language. So I hope that people may find a common ground with music that comes from a damaged place, but is designed to feel optimistic instead of hopeless.

I keep hoping a doorway will open and show me the reason for creating music, other than the fact it's a natural thing I've done my whole life. I just never expected it to become such a barometer for how I wish I could feel.

I originally had titled my album after an ancient village that had existed for 3,000 years, [and] that through colonialism destroyed this history and erased much of the knowledge. It is typical of our world to learn such things and feel that there is something to be learned.

I was surprised to feel that even though I'd grown up on the land I did not know the story of it. It became important to learn and most importantly to listen to the stories of the past. Recognize that indigenous cultures have been challenged by the growth of the modern world and taken away some of its splendor.

I think each area in the world has these facts and stories. So I'd start with learning about this, and then see how you can help raise voices and awareness to the right causes.

My animals. The way they look at me, and without words we share true respect and love. This is something I wish the world could emphasize and grow on. I have a great respect for our Earth and its many creatures and cultures.

I honestly feel we need to share that love to enrich people's minds. The USA has been one of the worst examples lately of having this respect. So it's been quite tough to endure the path we've been on. I'm praying there is a new path now that leads to a better place.