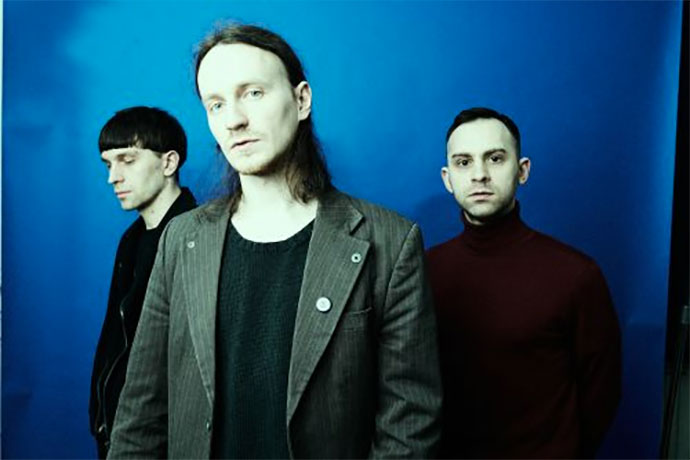 Russian heavy and dark post-punk outfit Ploho keep it concise and relevant regarding revealing information in interviews, mostly letting their music speak for them instead.

The LP reflects the frigid and unsparing environment encountered in Novosibirsk, Siberia, and the lyrics are sung in their native Russian language.

Inspired by the bleak and unsentimental melancholy of Joy Division and equally stark and cold atmosphere of the 1980s Soviet era, Ploho put their spin on the noir and emotionally distant post-punk and heavy rock genres.

The trio formed in 2013, are well-known in Russia, and are making inroads around the world. They have four albums to their name, as well as several EPs, and have touring over 40 European cities multiple times.

Hello! Please introduce yourself and briefly describe your sound/music vision.

Andrey Smorgonsky: I play bass and would like to describe my musical vision as a love of the refined minor.

What is the main personal, national, and/or international issue(s) concerning you the most these days?

V.U.: My personal issue is that I am not able to travel and to do what I love most in the world - playing concerts. The common problem at all times is the same things. They have different forms at different times, but the essence is always the same. That greed, envy, and lust for power. This is still going on everywhere.

A.S.: Excessive information flow is one of the issues. Few people have the independence of judgment and the ability to filter information, to be neutral and truly open. In my opinion it is necessary to accept life as real in its diversity. In today's world, with all its high level of technology, science and education, we see that myth-making is still alive, and people are still divided into camps.

What song, video, or quote of yours best represents your current perspective on these important topics?

V.U.: All of my music expresses my point of view on these topics. That's why I write my songs. To speak out, to share my opinion. My focus has always been on a common man, yours or my neighbor's. The person who fixes the elevator in your house, or sells you cigarettes. They each have their own personal lives and yet 90% of the same problems.

A.S.: I think my perspective on the perception of external information and the differences between people can be described by one of my favorite books. The Man Who Mistook His Wife for a Hat and Other Clinical Tales by Oliver Sacks.

What is your favorite song, video, or text quoted by another actor or artist that best illustrates, or at least partially relates to, your current point of view?

What other forms of protest other than through your music that you contacted to get your message across?

V.U.: If you have to protest to have your opinion heard it's a living hell. Music is enough for me.

V.U. Only amnesia can give you hope for the future. Because you can't run into the future by remembering the past.

A.S.: Life itself gives me hope. There is still much unseen, unexplored, untouched and unheard ahead.