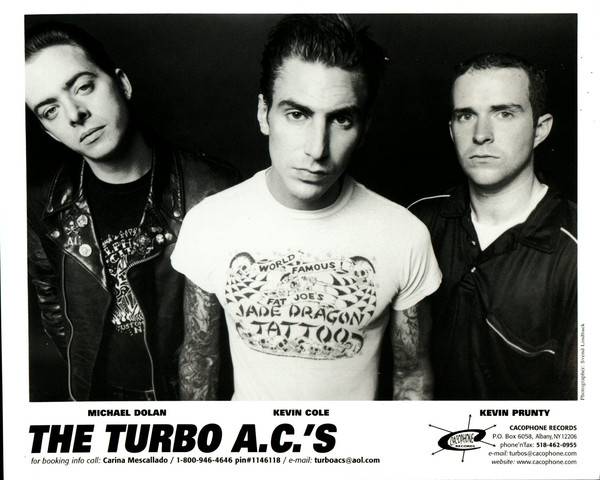 Dolan (bass) and Prunty (drums) are standing outside of the Garage on Santa Monica Boulevard, where the Turbo A.C.‘s are headlining. Without saying a word, Dolan pulls out half a dozen snapshots of a busted-up black van.

Rebel Noise: What happened to your van?
Dolan: We were on our way to San Francisco, and we had a trailer [attached to our van]. Our guitar player [Kevin Cole] was driving, and he was driving a little too fast, and the trailer whipped around and jack-knifed our van. The trailer detached, the van flipped over, and we went through the median and into oncoming traffic.

Rebel Noise: Any major injuries?
Dolan: Both [Cole and Prunty] got some stitches. [Prunty’s] whole head is totally fucking cut.
Prunty: I’m wearing a hat to hide the stitches.

Rebel Noise (to Prunty): Yeah. You’ve got some stitches in your nose, too.
Dolan (whining): So, I don’t want to hear anyone complain about how rough life is on the road. Fuck you!

Rebel Noise: Is this the end of the tour?
Prunty: We’re about halfway through. After we wrap up [our shows] on the West Coast, we’ll be in Europe for five weeks.

Rebel Noise: Are both of you from New York?
Dolan: I’m from the Bronx.
Prunty: I was born and raised in Manhattan.

Rebel Noise: You guys were talking to Lucky Almader from Los Creepers a few minutes ago. You can see his ride from here. What kind of car is that?
Prunty (looking at Almader’s car, parked across the street): A ‘54 Chevy.

Rebel Noise: And what kind of cars do the Turbo A.C.‘s drive back in New York?
Dolan: You can’t even have a classic car [like Lucky’s] in New York because of the weather.

Rebel Noise: Then why do you make so many references to cars in your songs?
Dolan: Most of them are metaphors for trying to overcome adversities and struggles. The references are about living your life as if you are driving or going somewhere physically, and you become the automobile in a spiritual sense. But songs like “Hit and Run” are about things that really happened.

Rebel Noise: What is “Hit and Run” about?
Dolan: “Hit and Run” is a song we wrote about a car accident we got into on our first European tour. We totaled our van on our day off.

Rebel Noise: You guys have gone through a lot of vans, huh?
Prunty (laughing): A lot of shit happens on tour.

Rebel Noise: “Hit and Run” is on your new album, Fuel for Life. Are there any other songs on Fuel for Life that you want to talk about? What about “Primer Black”? Is that song really about surfing?
Dolan: Kevin [Cole], our singer and guitar player, surfs at Rockaway Beach in New York City. People in New York actually take their surfboards on the subway and go out to Rockaway Beach to surf. And in “Primer Black,” Kevin sings the lyrics, “six-pack, surf rack.” He’s talking about waking up at six o’clock in the morning to go surfing.

Rebel Noise: That’s hardcore, man.
Dolan: There is also the whole element of surf or reverb guitar that [Cole] brings to the music. Not a lot of bands [use reverb guitar leads] now, but bands like Agent Orange and the Dead Kennedys [used them extensively] before. I think people overlooked [the Dead Kennedys’ unique guitar sound] because they were [more interested in] looking at the lyrics and listening to what Jello Biafra was singing about.

Rebel Noise: Roger Miret from Agnostic Front produced Fuel for Life. How did you hook up with him?
Prunty: Roger’s wife is a longtime fan of the Turbo A.C.‘s, and that’s initially how he got to know us. He wanted to produce Fuel for Life, and he just came in and did it. Roger told us not to overanalyze everything while we were in the studio, and he created a really good [recording] atmosphere. When things got rough, he would just say to me, “Go get a sandwich.” We ate a lot, and Roger introduced us to Cuban food.
Dolan: Roger also sang background vocals on a seven-inch single we did, called “Nova.” It was fucking awesome singing in the [studio] with him. You can get “Nova” through our web site.

Rebel Noise: Did you guys see Kim and Kelley Deal from the Breeders perform earlier? Kim Deal recently moved to Hollywood, and I guess they decided to play an unannounced, surprise set.
Dolan: I think they were here [at the Garage] just showcasing new material.

Rebel Noise: And you can tell everyone that the Breeders opened for the Turbo A.C.‘s.
Dolan (laughing, then speaking with an uptight English-Irish accent): Hey man, At the Drive-In opened for us like six years ago. Now they have U2 saying, “You’ve got to check out this new band, At the Drive-In. They’ll blow you away with their afros.”

Rebel Noise: One last thing. Who is that chick on the cover of Fuel for Life? She’s hot! What’s her phone number?
(Dolan and Prunty become totally distracted as B-list Hollywood actor, Eddie Deezen, randomly walks by. Deezen is best known for his role as Eugene in the ‘70s film classic, “Grease.”)
Dolan (whispering): Whoa! Do you know who that is? He’s wasted!

Rebel Noise (trying to regain Dolan and Prunty’s attention): Hey, can you answer our last question? You know, about the chick’s phone number?
Dolan (laughing): Hey, if you can get her phone number, give it to me.