A Death-Grip on Yesterday 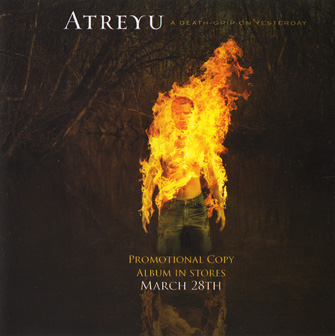 Atreyu is coming of age…

So I came home the other night from a show or something, I have no idea where I was, anyways... I hung my poof-coat up and looked down at my mail. Victory sent us yet another CD to review (that I sorta don't have time to review but wtf, here I am...damn it). There's positives, there's negatives. It's an advanced free copy...of Atreyu. I LOVED ATREYU before I got into ..."different" stuff. Not "better" per say, just "different". As you can see, I am being decidedly open minded.

I'd say that since I've seen this band a few times and I've listened to their records far too many times...to count? I 'd like to make the point that I couldn't be in any better position than humanly possible to be writing this review of their newest release on Victory Records; A Death Grip On Yesterday. Good title. Cover art is alright...I guess you could say that it's original. The promo cd they sent doesn't have lyrics, I'd love to be able to actually know what exactly they're saying on this disc. I think when most music critics think of Atreyu, they tend to lash out. I'm not really typical in that respect. I think Atreyu is good at their own game. They don't really play it for anyone but themselves and their fans, so for that they get my respect. I do speak for most when I say that I wish Alex had a little bit stronger of a scream. I love the drummer's vocals, always have. On this disc though, the hooks that Atreyu made famous on their last release, The Curse, are not as heart wrenching or melodic. From what I can tell, lead vox has got mad girl issues, dood. "Ex's and Oh's" - peerrrfect example. Haha, the IRONY, SHEER IRONY of that title. (sarcasm) You have to appreciate Atreyu for what they do though, youthful and melodic metal with that ever present and desperate hint at a hardcore twist. Although it sometimes appears that they do try, Atreyu writes music that never really reaches the true glory of the hardcore...genre. I cringed calling it a genre... A Death Grip On Yesterday is better heard by your token Underoath fan, rather than your neighborhood hardcore enthusiast.

Moving on, I got this CD about a half a week ago. I popped it into my computer at home and left it for another day. Came back tonight, after an awesome day at a local hardcore show, turned my Itunes on and checked out this new release. I played it thru while checking ourspace and the main thing I kept thinking is the fact that the CD is like one big blob of singing, screams, emo lyrics and...breakdowns. It makes a weak attempt at cutting a new and deeper stab into something more creative and mature from this band. To be fucking forward, I'll say that yea, it sounds a shit-ton like past releases. And after all of this summer's rumors about the band breaking up and fights with their label, a journalist has to wonder if this 9 track release was a quick attempt at throwing something together to shut the label up. Don't get me wrong, I love Victory but it's a business, it's a game of money and numbers. You gotta keep your company and it's product afloat by always being in the forefront of the scene (yet another cringe...) or you run the risk of fading away. Its true for every signed band and every label; inde or major, punk or pop. It's unfortunately, our society's proudest entertainment law.

Overall, I definitely think the kids will like this release though, they always eat this shit up, ya know. GOTTA LOVE THEM SING ALONGS! So way to go Atreyu, I hope you release a 5 tracker next time. Just don't start licensing your music to Kidz-Bop now... For the love of whatever gods you believe in, PLEASE don't.

Atreyu, A Death Grip on Yesterday is in stores on March 28th, 2006. Congrats to them on joining this year's Taste of Chaos tour, coming to a city near your lazy ass soon, so go buy a ticket you fuck. Thanks for reading, now get off your ass and buy yourself the disc and make up your own fucking mind on weather it's shit, or THE SHIT!

ps: I forgot to say, the guitars sound SIC, but this is Atreyu...we sort of expect that. AND, I'm not done yet... I want to add that I think "The Theft" is incredibly themematic, which I really kind of like. Thanks.